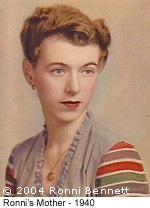 In 1991, my mother was found to have cancer. Her right breast was removed and when the nice ladies from a cancer survivors’ group came ‘round with implant information, Mom thanked them and shooed them away. “What do I need breasts for,” she said. “I’m 74, not 24."

She had a prosthesis fitted so she wouldn’t look lopsided at the pool of the apartment complex and got on with living.

A year later, cancer was found in her other breast. During the final pre-hospitalization check-up, something alerted her physician who postponed the surgery and ordered new tests. Mom phoned me in New York from Sacramento.

She’d had two hips replaced, several years apart, and had been happy to recuperate both times without me. She did so again during her first breast cancer surgery. This time, however, she seemed to be not so cavalier. In our family, we neither showed nor acknowledged strong emotion, but I thought I heard a bit of worry in her voice, maybe even fear. I filed the observation under interesting, but did not mention it aloud.

Mom had not regained the 25 pounds she'd lost after the first cancer surgery and her energy level did not return to what it had been. As we waited, over the period of a week, for the results of the new tests, we spoke on the telephone every day which was hardly our custom. Beyond our cats and cooking, we had little in common.

I got the call from Mom on a Tuesday evening. More cancer. Liver. Inoperable. A few rounds of chemo or radiation might extend her life a few weeks, but the doctor's best guess was that she had about three or four months to live.

Because in our family we do not intrude or arrive unannounced, I asked Mom if she wanted me to go to California to be with her. “Oh yes,” she said. And after a pause, “please.” There was no guessing at what she was feeling this time. It was the most emotion I’d heard in her voice in my entire life.

The first thing I did when I was settled into an extra bedroom in her apartment was visit Mom’s physician. He told me this story:

He had called Mom into his office, he said, to tell her in person the results of the tests. He explained carefully and clearly, going over every option in detail, though there were, essentially, none. No hope. It took about ten minutes to get through it all, and then he stopped talking.

Mom sat quietly looking down at the floor, very still. She sat there without speaking for what, in other circumstances, would be too long. Just as the silence was becoming uncomfortable, she looked up and said to him: “Are you telling me I shouldn’t buy any green bananas?”

The doctor was stunned. He had no idea what to say. They both were silent, looking at each other, perhaps wondering what was next. And then they burst out laughing.

How absolutely delightful and inspiring. Although I think it's easier for some people to accept their own death than it is for them to accept the death of someone they love. Thanks for sharing this very personal view of both you and your mother.

Yes, this is where IT -- whatever it is -- really counts, looking full-faced and unblilnking into the mirror of your own mortality . . .

Thanks for sharing this exemplary story of Mom, Ronni . . .

This was such a wonderfully told story of courage and humor, and I am appreciative that you've shared this story with us. I look forward to reading the next installment, even though I also wish there might be room for a different ending.

Thank you for the beautiful story, Ronni, about a beautiful mother.

What a fantastic lady, thanks for sharing.

I will be here for every installment of this story until the end, even if it breaks my heart.

I am working a bit with an agency that provides homecare at all levels. I'm helping them with a monthly newsletter. I passed your series along to the owner of the agency.

I'd ask, if you run across pages appropriate as a resource for the staff to better understand or better perform their duties, please pass it along for future newsletters.

perhaps it was a particular bit of dark humor that was passed around in their generation, because my father said the exact same thing when his doctor passed along comparable news.

Inspirational and uplifting, Ronni. You and your mother shared one another and an experience which, while not unheard of, was made unique by what you took away from it and so beautifully expressed.

It's interesting that in 1992, my now wife and I met at the CA Dept. of Aging in Sacramento where she spent 10 years on staff and I spent six, both of us legislative and political analysts. Following my retirement from the state in 2008 we moved to the Ozarks where we celebrated our 17th anniversary last month.

Thank you for the beautiful story.