Getting old in a little town

I’m sure those desert cammies our troops in Iraq wear do whatever job they were designed to do, but one of them is not to help our guys look handsome. Even when officers are giving briefings on television in dressier uniforms, you can tell that style was not on the government’s mind when they thought up these duds. 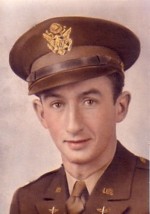 But look at this guy. He’s my dad, Theodore Landis Haist, in about 1942, dressed in his Army Air Corps uniform just before he was sent overseas. Yes, he is impossibly young in this photo, but doesn’t he look spiffy in that World War II uniform.

The reason I bring this up is that I received an email a few days ago from a woman, Rana, whose Weblog banner is a photo of her dad in North Africa during World War II in the same kind of uniform as my dad’s. Those guys looked so slick and I wonder, sometimes, whatever happened to a sense of style in our lives.

But that is still not the most important reason to tell you about Rana’s Website.

At 40, she’s too young to be an Older Blogger, but she has a lifelong affinity for older folks. She thinks maybe it is because she was a late baby, born when her mother was 40, or that her housemate is 74 years old. Whatever it is, she “gets” older folks and that is abundantly evident in her short, short story, Getting Old in a Little Town, about the eccentric old folks she grew up with in west Texas.

There isn’t a lot of writing about older people any more than there are many movies or TV shows about us, so hardly anyone knows what we’re really like. But Rana does and she writes like a dream. Click on over there to read this story and while you’re there, dip into the rest of her site. You will be glad you did.

Many thanks for the kind words Ronni. Won't it be nice when we get to the point where we all just "get" folks and we don't worry about the age involved?

Whoa! You're right about Rana. That gal can write, she's quite a storyteller!