Aunt Edith in an Interesting Hat 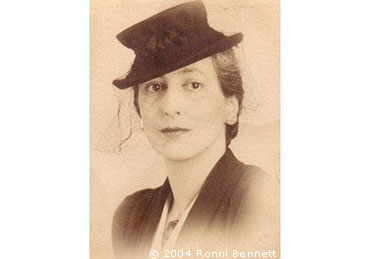 [1925] In the 1920s and until shortly after World War II, no proper woman left the house, even to grocery shop, without a hat. I remember watching Aunt Edith, when we were preparing to go out together, adjusting that day’s hat just so, attaching it with a fabulously jeweled hatpin, then turning to and fro in the mirror to be certain it was perfectly placed. I liked the elegance of that ritual. I wish we still wore hats.

COMMENTS FROM PREVIOUS WEBSITE
airchild @ 2003-08-25 said:
Really beautiful portrait, and lovely account of the hat-wearing ritual. It was indeed very charming, wasn’t it?

rosarosa @ 2003-08-25 said:
Did they weare gloves also? And what about cigarettes? Would women then, smoke with or without gloves or not at all? I’m now writing a story about that time, so…

ronni @ 2003-08-25 said:
Oh, yes, rosarosa. Gloves were an important accessory to a woman’s wardrobe until the 1950s, and not necessarily for warmth. The length of the gloves for different circumstances - casual, formal, business, evening, etc. - was an important matter and it was a fairly serious faux pas to wear an inappropriate length or style for the occasion.

There were rules (have no idea who made these rules) too about proper removal of gloves, when to remove them to shake hands and when not to. Some women wore jewelry - rings or bracelets - over their gloves. I don’t know if there was a rule or custom about smoking with gloves, but I remember seeing women do so. Men, in those days, made as much a point to light women’s cigarettes (there is a great scene showing how sexy this could be with Bette Davis and Paul Henreid in the movie, Now, Voyager) as they did to open doors.

rosarosa @ 2003-09-01 said:
Thanks, ronni. I couldn’t find you back for a while! Incredible, unbelievable. And such a short time ago, really.

How funny! You made me remember the hatpin my mother had, which fascinated me when I was a little girl. I was forbidden to touch it for fear I would get hurt and I couldn't wait to get older and have one. It turned out when I was older I never even bothered.

When I was job-hunting in Seattle in 1966, I made sure that I wore impeccably clean cotton gloves (black with white panels on the back) with my black-and-white cotton suit-dress (3 pieces: the black skirt had an attached bodice instead of a waist band; there was a white, waist-length over-blouse; and the topper was a black, waist-length jacket. The blouse and jacket were jewel necked.) There was another, similar tiny houndstooth outfit that was alternated with the other--also in black and white. (These outfits I recall clearly; but, I don't recall what I wore last Saturday!)

It really made not much difference what I wore to the job interviews since each of the interviewers was seeking a young man for the position--and told me so!

Beauty sure did run in your family.
I hope you are enjoying the holidays.

What amazed me when trying on my grandmothers' gloves was how small their hands were. I am only an inch taller than my maternal grandmother but the gloves became too small when I was in junior high school.

My grandmothers bemoaned our "manly" hands. I also remember dressing to go shopping with the grandmothers, down to polished Mary Janes.

My paternal grandmother, who loved to knit and sew, bemoaned the fact that she was terrible at hatmaking and indeed wearing hats.

I wear hats - and many times gloves, in the summer - today anyways, despite it not being the main fashion. I get tons of compliments...

Went through these Aunt Edith posts not long ago, but interesting to view them again in relation to the link on today's post.

She does indeed sound like a very special and interesting person. Can easily understand why she would seem to hold such significance in your life.

You have certainly paid her a lovely tribute in all these posts which I can well imagine would have greatly pleased her.

As with so much you write, along with comments of others, a side effect is tapping unrelated memories of my own ... clothing attire in the '50's, my NYC friend whose stunning appearance in big hats suitably impressed midwest sophisticates, always gloves for dress including my long white ones with 3/4 length raglan sleeved classy 3 piece wool outfit, spike heels, etc., etc. Glad to be out of spike heel shoes!

I got a couple of hats. One is retro 60's look. I got to I inherted my g-mother Hovey's thin hair. I'm growing a forehead. I've tried combing my hair forward. But now my forehead is showing thru my hair. Besides in Texas the sun is burning hot so you have to wear a hat to protect your skin.I'm going to go out w/my style. My pic can be found on flickr under glograbear@yahoo.com in my hat w/my dogs.

Looks like it's "Ladies Day" at ATGB. I guess I'll check out here.
Don't know much about hatpins or white kid gloves, kid but here's looking at you (anyway)