In the eight months or so since I began this blog, my life has been enriched in many ways. It has forced me to think seriously about getting older in ways I would not have bothered if I weren’t writing about it. Readers who leave comments have taught me many things (not only about aging) and pointed me in directions of thought I am unlikely to have found on my own. And best of all, I have made new friends. Astonishingly, some have sent me gifts which today, I will share with you.

The Best Cigarette
Eric Antonow, who is president and CEO of a company that provides technology services for real estate companies, also runs several blogs, including d_o_c_u_m_e_n_t, and among his other wide-ranging interests, he produced this CD of Billy Collins – America’s poet laureate in 2001 – reading his own poetry.

We “met” when Eric responded to an essay I posted about the phenomenon of time seeming to move faster as we age and I then posted his response. Subsequently, he sent me Collins’s CD. Here is one of the poems:

Another reason why I don't keep a gun in the house
The neighbors' dog will not stop barking.
He is barking the same high, rhythmic bark
that he barks every time they leave the house.
They must switch him on on their way out.

The neighbors' dog will not stop barking.
I close all the windows in the house
and put on a Beethoven symphony full blast
but I can still hear him muffled under the music,
barking, barking, barking,

and now I can see him sitting in the orchestra,
his head raised confidently as if Beethoven
had included a part for barking dog.

When the record finally ends he is still barking,
sitting there in the oboe section barking,
his eyes fixed on the conductor who is
entreating him with his baton

while the other musicians listen in respectful
silence to the famous barking dog solo,
that endless coda that first established
Beethoven as an innovative genius. 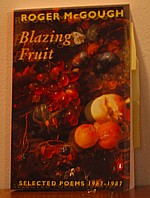 Blazing Fruit
Cook Sister is an ex-pat living now in London who blogs about her native South African cooking, including a lot of good recipes. She sent me a collection by British poet Roger McGough, who is as witty and satirical – in his own, different way - as Mr. Collins.

Here is a poem Mr. McGough wrote about sin and age, written about 20 years ago when he was in his fifties:

Take my advice: braving
The storm will not impress your lover
When you turn up at the house
In an anorak. Wellingtons,
Even coloured, seldom arouse.

Your umbrella will leave a tell-tale
Puddle in the hall. Another stain
To be explained away. Stay in,
Keep your mucus to yourself.
Today is not a day for sin.

Best pick up the phone and cancel.
Postpone until the weather clears.
No point in getting soaked through.
At your age, a fuck’s not worth
The chance of catching ‘flu.

Bling Bling
Cowtown Pattie of Texas Trifles has a wicked sense of humor, knows a lot about good fun and has a heart as big as her home state. To my delight (I have a short history, many years ago, with Texas) and to the great amusement of some overly sophisticated, New York friends, these turned up in my mailbox from Pattie.

We who blog do so for many reasons but I doubt, when we began, that new friends – people we would never meet otherwise - were on our minds. Life is full of excellent surprises.

I enjoyed reading your journal. Roger McGough is well known in England and is often on the radio over here. I met him at a conference a few years ago.
I've been blogging for some years but am new to Typepad and just starting to explore its riches!

You're most welcome! I love ya.

What wonderful gifts you've received, Ronni. Many of your readers are quite taken with you and a few of them showed it by sending quite excellent gifts. Bravo!

Glad you liked the poetry, Ronni! I have loved Roger McGough since I first read him in 1986 and I'm always happy to put somebody onto his work. The poem you chose to reproduce was one my mom and I always quoted to each other - if she called me and it was raining, her first words would always be "today is not a day for adultery" - it became our code phrase for bad weather. Man, I miss her - and she would have loved your blog as much as I do.