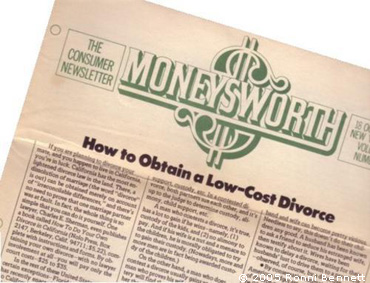 [October 1971] Mom sent me this when I told her about having left Alex. I was an emotional wreck in need of some TLC and I don’t know if her purpose was misplaced humor or practicality. She had always handled her own problems alone, asked no help and made no complaint. Although I never became as accomplished at stoicism as Mom, I was raised to be so: “Learn to roll with the punches, Sarah Heartburn,” is what she had always said when I wailed.

COMMENTS FROM PREVIOUS WEBSITE
av_producer @ 2003-09-12 said:
Most interesting is that you kept it and seems fairly well preserved.

ronni @ 2003-09-12 said:
Isn`t that so, av. I was surprised when I came across it while plowing through boxes of old photos and stuff for this log. I may not have seen it since I first received it.

zinetv @ 2003-09-12 said:
I think we have gotten a little ahead of ourselves here. Last I read you left house, home and husband. You were traveling with 2 suitcases and $500. So how did your mother find out where you were?

Speaking as a mother, myself, Ronni, I would say that your mother was trying to be helpful. A bit awkwardly, perhaps, but with good intent. I frequently wish that I could be more graceful in offering support/help to my daughters. I can empathize with your mother (and with you!)
You've done all right for yourself, Sarah Heartburn!!

Hey, congratulations on being the blog of the week. I bet you've got hits coming like crazy--and that's as it should be. You have such a wonderful blog. Did you go to see The Gates?