Home About Archive Contact
An Open Letter to Recruiters on Hiring Older Workers
And When I Die... 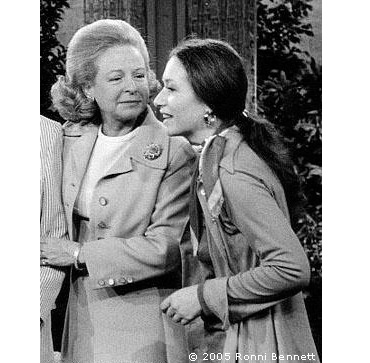 [June 1974] Working now as a producer at the The Pat Collins Show broadcast live on WCBS-TV each morning, I booked Martha Mitchell to co-host for a week when Bernstein and Woodward published All the President’s Men.

Martha had been vilified in the press throughout Watergate and was generally disliked by the public, but everything they said was wrong. Martha and I became friends after the week of working together and she was always charming, funny and more politically astute by half than her detractors. And no, she was not, as they said, a drunk.

COMMENTS FROM PREVIOUS WEBSITE
av_producer @ 2003-09-14 said:
At some point in 74 or 75 - maybe 76, I appeared on the Pat Collins show! I can`t remember exactly why but it was arranged through the Children’s Aid Society and I was one of 3 of 4 who were involved. Virgina Capers and her father were also on the show. I remember her father’s bald head needed more make up to cut down on the reflective glare of the lights.

ronni @ 2003-09-14 said:
Well, we’ve met then, av. I don’t remember her father, but I normally produced segments with Virginia, who appeared fairly regularly.

yolima @ 2003-09-14 said:
Hi ronni, good morning. Aren’t you up early? It is interesting to see you "mature" in these pictures. You also were promoted quickly! Interesting life story as it unfolds on your log.

yolima @ 2003-09-14 said:
Also, regarding this picture, it is apparent you two had a nice relationship going. She looks at you in a very sweet way.

roomwithaview @ 2003-09-14 said:
My mother and I always believed Martha had great presence and guts.

ronni @ 2003-09-14 14:42 said:
I don’t know how old you are, tate, but I doubt it’s true about not having good stories. Everyone has good stories. Just keep in mind that everything is interesting if you pay attention and you will find them.

Wonderful photo and tale, Ronni. Ms. Mitchell commanded a lot of respect, at the end, even from those who had believed the vilification. Thanks.

I second the commentor who suggested a book. You were obviously privvy to sides of famous people the rest of us were excluded from. Funny how the public perception and the individual behind the famous facade are always at odds. Thanks for giving us the real person glimpses!

Love the long eyelashes and ponytail . . .

Oh, and yes, definitely, Ronni, you have a marvelous memoir with pics of the 60s & 70s that would appeal mightily to the bulging demographic of us pre and post babyboomers over the next decade or so . . .