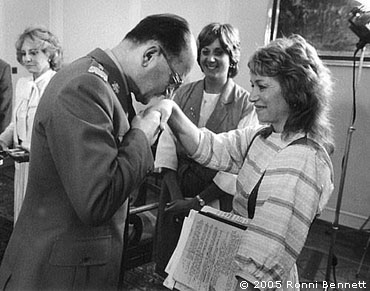 [21 July 1983] No one told me that in Warsaw, men – even Communist heads of state - kiss women’s hands in greeting and farewell. Graceful acceptance of this gesture is a social skill I had not mastered.

COMMENTS FROM PREVIOUS WEBSITE
av_producer @ 2003-10-05 said:
A girl (now a woman) I once worked with carved a wonderful pumpkin with the face of General Jeruzelski on a dare from me using a cover from The Economist as her study. I wish I had a picture of it.

av_producer @ 2003-10-05 07:29 said:
To get back to the historical importance of the General - he was faced with the Solidarity movement and John Paul pecking at the Communist authority - an authority that was hollow at best. Fascinating time.

ronni @ 2003-10-05 said:
We were interviewing Jeruzelski for 20/20 on the occasion of his lifting martial law after two years of putting down the Solidarity movement. It didn’t make much difference because he had transferred most martial law to civil jurisdiction.

zinetv @ 2003-10-05 said:
Great moment, and you carry that ton and half of paper in left arm so naturally. I understand these days network producers have reduced the paper to a slim laptop.

You are looking really elegant in the picture - and with a general, no less! The man who ruled Poland! You have had your moments.

Are those computer printouts that you are lugging about? (BTW: If the picture doesn't show graceful acceptance of the general's gesture, it certainly fools me!) Did you choose your outfit for wearing that day because it is faintly reminiscent of a Polish ethnic design? (Or do my eyes deceive me?)

Cop Car: We weren't using computers yet, so it's loose papers and undoubtedly a three-ring binder under the top paper. I used binders in those days by the boxful.

The dress was of the lightest fabric I brought with me. Warsaw was having a horrible heat wave that summer and there was no air conditioning, even in the Sehm (parliament building) where we did the interview.

As to any grace - so much was going through my mind: Do I lift my hand, or do I let him lift it? How do I hold my hand - limply, stiffly or something in between? What is the proper response to having one's hand kissed? Is it different for a head of state than an "ordinary" person? And so on...

I still don't know the answers to those questions but, fortunately, no one else has ever kissed my hand.

To me, the look on your face is saying, "What the heck is this guy doing!" You look really cute though!

I notice that he hasn't removed his dark glasses for the baise-main! ;)
Ronni, you look like it's the thousandth time someone's kissing your hand!

I came to this blog to comment on the posting of "Manhattan Tower", which I haven't thought of for probably 40 or 50 years,but was listening to a Kathy Reichs novel, and she was describing Charlotte, NC as "in tres partes dvisa est", which brought "Learning My Latin" to mind, so I looked for it and found timegoesby.net. Congratulations, and you look like Veronica Cartwright in this Jaruszelski photo. Very nice. Thanks so much for the blog. ...Jim Gordon