[EDITORIAL NOTE: Cowtown Pattie at Texas Trifles passed me the reading meme that's currently going around the web. My answers are below today's photo and caption.] 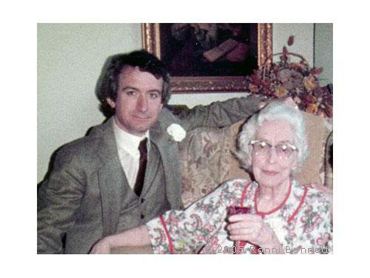 [January 1984] On 13 July 1985, three months shy of her 90th birthday, Aunt Edith died after a short illness. She was an extraordinary woman who flouted the cultural restrictions of her time and I believe if she’d been born later, she might have become an important public or corporate leader. You can see more of Aunt Edith's life in these earlier entires:

THE READING MEME
1. You're stuck inside Fahrenheit 451. Which book do you want to be?
Call me thick, but I’ve seen this reading meme all around the web and I still don’t know what this question means.

2. Have you ever had a crush on a fictional character?
Not that I can recall, but for as long as I can remember, I've had something resembling a crush on writer Gore Vidal.

3. The last book you bought was...?
Saturday by Ian McEwan. I always look forward to McEwan’s newest book.

5. What are you currently reading?
Re-reading Dark Age Ahead by Jane Jacobs and If On a Winter’s Night a Traveler by Italo Calvino.

6. Five books you would take to a desert island...
Big, huge, heavy books with lots of ideas in them. Any of Gore Vidal’s essay collections; United States, Essays 1952-1992 would do nicely. Crime and Punishment - Fyodor Dostoyevsky. Writing New York – A Literary Anthology. The Complete Works of William Shakespeare. The most recent edition of Bartlett’s Quotations.

7. Who are you passing this stick on to and why?
Tamar at In and Out of Confidence. Robert Brady at Pure Land Mountain because he’s American-born but been living in Japan for decades. And Deejay at Small Beer because he’s just started blogging and this will be his first meme.

Well, I accept your invitation with glee and thanks.

Am honored (nay ecstatic) to be invited on the same post as Aunt Edith.

It has been such fun - probably my first ever "meme!" Thanks again, Ronni.

I accept the invitation, and will post my responses later today or tomorrow. The only problem I'll have is thinking of three people to send it to: so many of the ones I read seem to have already received it.

Doesn't Gore VIdal play for the other team?

That doesn't mean you can't have a crush, kenju...

Here's an interview with Gore Vidal from my favorite guy, Marc Cooper:
http://www.laweekly.com/ink/02/33/features-cooper.php

I know that, Ronni, I have crushes all the time on the other team. The first time I heard Rock Hudson was gay, I was flabbergasted. That was in 1962 (and I heard it from the Four Freshmen!).

Cool answers, Ronni! Thanks for playing. The Fahrenheit question is a little odd, if you haven't read Bradbury...

You know, Pattie, I read Fahrenheit 451 about 50 years ago. I remembered the book burning but not the memorizing. Cop Car enlightened me after I posted this, and I still have to opt out of that question: no way could I memorize an entire book.