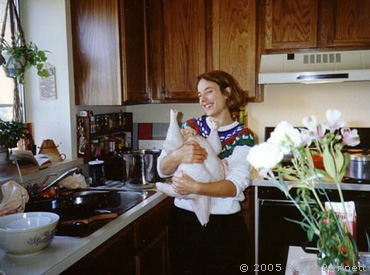 [November 1987] I’ve always been impressed with how every immigrant to the U.S. I’ve known – people like my friend Elsbeth, who are unlikely to have portrayed Pilgrims in grammar school pageants - embraces our most American of holidays.

COMMENTS FROM PREVIOUS WEBSITE
boogers @ 2003-10-28 said:
She must really like turkey. The turkey almost looks happy too.

av_producer @ 2003-10-28 said:
In an odd way as an immigrant she is a pilgrim of sorts. I am a born and raised American although I have never hugged a turkey quite like that. Nice memory.

Well, it is a holiday based around eating well, how can they resist?