Home About Archive Contact
Dominick Dunne, Judy and Ronni
Too Hot, Too Busy 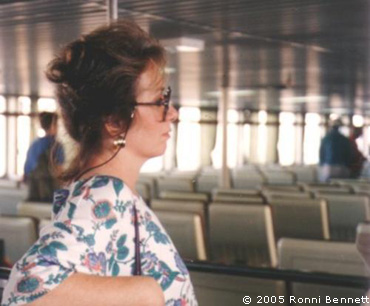 [September 1987] One night in southern Spain where we were shooting an interview with Sean Connery, I stuck three pesetas – then the equivalent to about 50 cents - in a slot machine at the casino and out poured a stream of coins that, when counted, were worth about US$4,000.

Found money! So I splurged for an additional week at the tony Marbella Club, visited the Alhambra in Granada and took this boat across the Strait of Gibralter for a couple of days in Tangier.

colorstalker @ 2003-11-01 said:
This makes me grit my teeth that nothing like that ever happened to me. Hmmmm. Not quite enlightened yet. Anyway, glad it happened to SOMEBODY.

Wow, I'm jealous. Most I ever won was about $80. I have a friend who played Keno once and won $10K. I am sure that would not happen to me!
I'm also jealous that you met Sean! LOL

Forget Sean Connery. You got to see the Alhambra! One of the places I've wanted to see ever since I was an architecture student too long ago.

I am a fan of Sean Connery too. Am just green with envy! I too would like to know more. When you have moved ;)