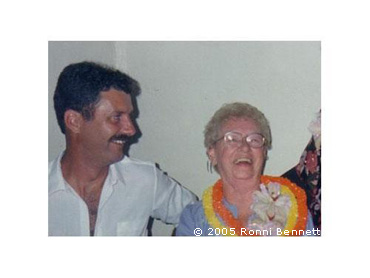 [10 July 1986] My stepbrother Joe, who had retired from the Navy and was living in San Francisco, joined me in Sacramento about five days a week, and I could not have cared for Mom during her final months without him.

When she became bedridden, Joe could lift her so I could change the linen. He was a terrific cook. He took out the trash without being asked. He even folded laundry. Together we ran the house and cared for Mom as though we had been doing such things together all our lives, and I came to love him deeply.

COMMENTS FROM PREVIOUS WEBSITE
av_producer @ 2003-11-17 said:
Real life testing. Who talks. Who steps up. Who walks away. Joe passed the test.

shutter451 @ 2003-11-17 said:
I took the test 18 years ago with my dad, six years ago with mom. I’ve always been pretty good with tests, like the SATs. And my wife thinks I could whoop ass on Jeopardy. But these are the tests we don’t choose to take. They’re the ones you can’t cram for. There are no Cliff Notes to help you through the last moments of your parents’ lives. I stuck around; I hope I passed.

I loved my parents very much and was honored with taking care of them in the mid 1980's. My mother's death at 83 was not a lingering one so my Dad and I happily shared the work. My Dad's, however at ninety, was a slow process, and through care-giving, I was able to know this wonderful, gentle man in a new way. Sometimes, the hardest tests are truly gifts.

I think one of the pure joys of life is learning all the aspects of a person and realizing how truly wonderful they are to your life...I venture to say Joe felt the same way about you. How wonderful you had each other during this time. What a nice picture. -Joy