Now don’t go getting all cross-eyed bored seeing that Social Security header up there. Crabby Old Lady is talking about a CELEBRATION today.

Seventy years ago Sunday, on 14 August 1935 - when the U.S. was in the depths of the Great Depression and about 25 percent of the workforce was unemployed - President Franklin D. Roosevelt signed the Social Security Act into law. 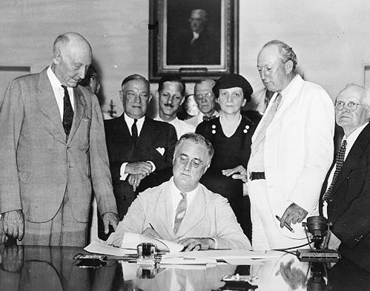 And so it has done. It is the most successful social program in the history of the world. Millions upon millions of people in the past have been saved from living below the poverty line thanks to the Social Security Act and so have millions of people today.

To give you an idea of how many people benefit, 415 million Social Security numbers have been issued since 1935, and 5.5 million are added every year.

In the beginning, it paid only retirement benefits. In 1939, Congress added dependents of retired workers and survivors of covered workers who die before retirement. In 1954, the Act was amended to cover the disabled. And in 1971, the Census Bureau reported that for the first time in history, the aged were no longer the poorest segment of the population.

President Bush and the current Republican Congress have so far been unsuccessful in trying to convince the public that siphoning off money from Social Security into private accounts will make everyone in America millionaires by the time they retire. And don’t you believe them about that when they gear up the propaganda machine again.

Crabby has recounted in this series the many reasons privatization is a terrible idea. Another recently came to her attention: private pension funds are evaporating through bankruptcies and mergers. Think of all the employees of the various Enron-type scandals too, who have lost much of their private pensions. Where would they be, especially the older workers who don't have the years of employment in front of them to recoup these losses, without the Social Security safety net?

Congress is off on its summer vacation, but when they return after Labor Day, a House Republican plan for private accounts may come to the floor for debate and vote, and Crabby Old Lady will need to rev us all up again in opposition. But that is weeks away.

Meanwhile, on Sunday, take a moment to celebrate this grand old lady of social programs. Bake her a cake, sing her a song and give her your thanks. Wish her a happy 70th birthday and many more decades to come.

Pension plans can be terminated and have been at alarming rates, but employees cannot "lose" their vested accrued benefits even if the plan is bankrupt as these benefits are insured by the federal government under ERISA (Employee Retirement Income Security Act of 1974) through PBGC, Pension Benefit Guarantee Corporation. If you want to read some pension horror stories, read what was done prior to ERISA.

I'll toast the grand old lady with a drink at my favorite neighborhood watering hole, paying for it out of my SS check, which came in this week, right on schedule. I appreciate it so much, as it makes the difference between my just getting by, and having a comfortable retirement.

By the way, I note at the SSA's history webpage, they still haven't identified the man at the back, with the bow tie. It seems strange someone who was probably a member of Congress or high-ranking government official remains unknown.

I get a little pension & will be getting SS(60). I have lots stocks, but cant't get to them until the market goes up. In my life, I have known too many on SS to not know LEAVE IT ALONE!

Crabby - I will be 66 at the end of Aug. My father had an 8th grade education , my mother -2 yrs. of high school. They left me over 2 mil. why doesn't Congress not participate in SS - because 2.5 vs. up to 10% makes more sense to them. Crabby, you must be from a family proverty striken in old age - shame on you....

Was just wondering how succesful SS has been. If it is so good why don't our beloved politicians subscribe to the system? Senators & Congressmen take a heavy hit out of our budget, if they were placed back into the system, wouldn't that help. They draw healthy $100,000 plus per annum pensions, out of the general fund, with many having 2 or 3 different pensions. Isn't this greatly disingenuous?
Let's put them back into SS and save a Billion a year for real SS benefits. 1000 or senatorial & political pensions at well over $100,000 a year. WOW