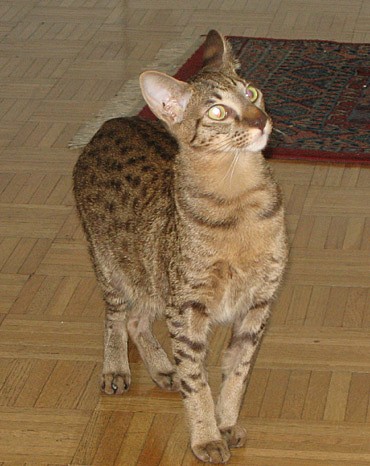 Oliver has been remiss in his blog posting, or perhaps he’s waiting for me to take more photos of him, which I haven’t done since his birthday in mid-August. These were taken by my former husband, Alex Bennett [scroll down], when Ollie stayed with him while I went to the Blogher conference in California in August. Ollie was much more cooperative for Alex’s camera than he is with mine. 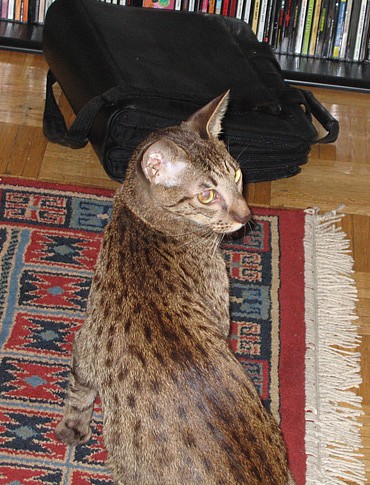 Decades ago, I owned Siamese cats who lived up to their reputation for being talkative. Yak, yak, yak. They never shut up among themselves, but they had little or nothing to say to me. Ollie, on the other hand, doesn’t chatter, but he does speak directly to me with intent. It is the oddest thing. He plants himself quite definitely at my feet or jumps on the desk when I’m there or tracks me down wherever I am, looks me the eye and makes a statement, clearly waiting for a reply.

There is no mistaking that he wants a response. When I answer, he follows up and there we go, back and forth, though it appears he has more understanding of what I’m saying than I do of him. 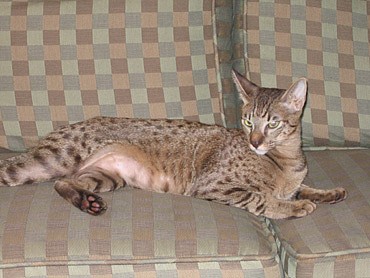 I have more success understanding Ollie’s body language. When he’s lying around like this, he usually wants to be left alone and has no trouble forcefully expressing his point of view without saying a word.

Beautiful cat with most unusual markings. I traced back and found your first description of him - "a Savannah, a hybrid, about 15 percent serval ... and the rest, Serengetti and Bengal." How big is he now? Fully grown? And where do you find these? I've never seen them in pet shops. Maybe special breeders?

Savannahs are a relatively new breed. Here's a description of them and some information on wild servals.

The breeder told me savannahs grow until they are two years old, but I'm not sure that will be true in Ollie's case. Perhaps because the breed is so new, the experts haven't yet had enough experience to know these things for sure.

I don't think they can be found in pet stores, but there are breeders on the Web who post photos of pet kittens (as opposed to show cats) when they are available.

Your Oliver is one sophisticated cat. Elegant. I've always been a dog person so my falling in love with a small, furry little street cat surprised me more than anyone else, especially after she moved into my house and bed. The short-legged Miss Kitty now sits next to my computer begging for, and receiving "treats" all day. She's beginning to look like a pot-bellied pig. ...and now you've posted these pix of the regal and slender (and long-legged)Oliver?
Miss Kitty and I are mortified.
:-(

As I was looking at the ever elegant Mr. Oliver, my tubby loveable Dorey jumped up on the arm of my chair and stuck his face in between me and the laptop. He gazed long at your Ollie and then turned to me as if to say, "I'm never going to be that skinny, am I?" Since Dorey's body configuration is more furry football than sleak jungle cat, I had to agree with him. ;)

Ah, such a handsome cat. And yes, in the last photo his bearing speaks loud and clear that he is NOT to be disturbed. My cats and I have conversations too -- I speak English and they respond (not in English of course), or I'll speak Cat and they respond to that too. It's a beautiful thing.

Nice to see how Sir Oliver is doing!

He is beautiful and very intelligent-looking. But, he knows that, right?

He is handsome and very regal, and looks like an ocelot to me. His markings are just beautiful!

What a stunning animal Oliver is growing up to be! Have you trained him to walk on a leash?

I was at the vets today. My Yorkie Annie was having her senior wellness exam and while waiting (much to her chagrin) I leafed through Cat Fancy. My there are some beautiful new cat breeds out there. There are two that closely resemble the Savannah; the Bengal and the Ocicat. Would love to have one of these beautiful cats, but with two parrots in the house, I must consider their safety first.

that is one beautiful regal being