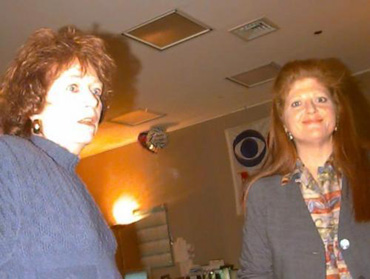 [1996] I was writing freelance scripts for such television documentary programs as The 20th Century and Biography when Meredith hired me in January 1996, to be managing editor for CBS-TV’s first website.

We were charged with covering only election news that year – “Campaign ‘96” – and none of us (did anyone then?) knew anything much about web production so it was an earn-while-you-learn project. We worked around the clock, seven days a week and delivered – if I do say so myself – an election site that to this day holds up as one of the best ever. [Photo: Viktor Cea]

COMMENTS FROM PREVIOUS WEBSITE
av_producer @ 2003-12-06 said:
Wonder if the technical limitations of the web at the time limited the "bells & whistles" and allowed you to be focused more on the content.

I could not have asked for the web to come along at better time, and although I had no IPO, the path I took landed me where I could have only wished for, but for which there was no place for me before the web.

albumyolima @ 2003-12-06 said:
I loved those early days of the web. It was such an exciting feeling to be able to communicate with the rest of the world in such a personal way. I don’t remember much from the more commercials sites of that time, I started surfing the web at it’s beginning, through the pioneer days of AOL. Seems like ancient history now.

What a fantastic opportunity and what an interesting life you have lived. I envy you all the journalsitc challenges. From where I sit, it makes teaching seem very shallow and easy.