Ronni at Her cbsnews.com Desk 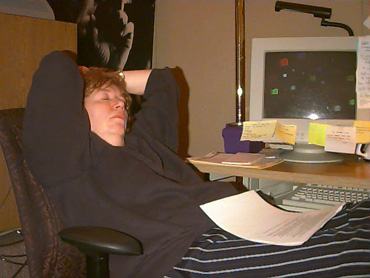 [1996] I’d been at work since 6AM and at 10PM, we were almost done for the day – just waiting for President Clinton and Senator Bob Dole to finish a campaign debate so we could write the last story of the night.

My job as managing editor of cbsnews.com had come along at just the right moment when, after about 25 years, I was bored with television production, where the techniques of storytelling were well-established and unless a story is complex or personally compelling (which isn’t always the case), there isn’t much to think about.

But in 1996, no one knew yet how best to tell stories online and I liked being part of inventing the future. [Photo: Viktor Cea]

This must have been quite an exciting period in your professional life, Ronni!
A great photo!

Looks like you had pretty full days back then Ronni...and that's only 9 years ago. Don't you wonder how you'd fare now with those kind of days? Hey, it might not even bother you now...but, I think I'd be sleeping for a VERY LONG time. Great pic.

It seems all exciting and glamorous and I wonder where you found the energy. But I know we find the energy when we are doing something we love.

I *love* this picture! I imagine you napping out of sheer mental exhaustion, and then snapping awake with a "Eureka!"-like inspiration of just the right turn of phrase, the right angle, to really nail the story...

Great photo and what hard word but great fun you must have had. With all of your talents and experience I still just can't believe you were turned down for jobs now simply because you are older... it's surely their loss.

It was an exciting time, helping create a new medium at one of the first news websites, but the long hours were not an isolated incident.

One late night, after three months of 14-, 16- and more-hour days, seven days a week, I collapsed. In the ambulance on the way to hospital, the emergency medical team was concerned about my heart. The eventual diagnosis was exhaustion.

I was afraid that because I was two, even three decades older than most of the staff, I'd be seen by my employer as too old for the job. But the doctor said even a 20-year-old working those hours for that long would collapse from exhaustion - I just happened to be the first.

Since then, I've given no one that much time without regular days off, but the incident doesn't change my exhiliraton from that time of being a pioneer in a new medium.

Looking at the computer in the background, I would have known roughly when the photo was taken even if you didn't have a date. I remember those flying windows.