Ronni Then and Now 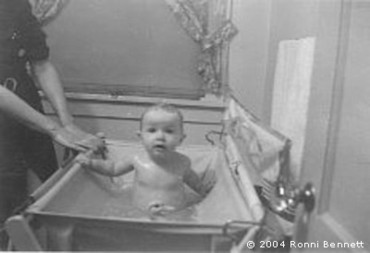 The family legend about this photo is that mommy and daddy were taking pictures of baby Ronni in her bath when a shocking announcement was made on the radio: Pearl Harbor had been attacked.

This image began a snapshot journey that covers more than a hundred years. It ends today in the present. The world has changed since I was a little girl. We have television now, cell phones, the internet and we know that the moon is not made of green cheese.

I wonder if little kids today see the face of "the man in the moon" as I did on clear nights many decades ago or if, in our new knowledge of the Sea of Tranquility and other moon landmarks, they no longer imagine such things. 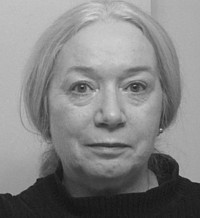 In sorting photos for the Timeline, I learned a lot about myself, my family and friends, and my world. I remembered old stories I hadn't thought of in years. I realized how public events sometimes colored my personal life. I changed my mind about some people, places and things. And - there are still so many stories left untold.

All in all, it's been an interesting trip most of which has borne no resemblance to what I daydreamed as a girl about my adulthood. Would I, should I have done some things differently? Of course. But we all do the best we can with the tools and strengths we have at the time and I have no regrets.

It has been a little more than a year since I began the Timeline and ending it today, feels like a beginning. It feels as though I've put old mysteries to rest, put a button on my adulthood and I'm ready for a new adventure.

Is it serendipity that the Timeline reaches the present just as I close the book on one era of my life and embark on another in a new city? Or is there an order to the cosmos that perhaps provides symbols and markers for us if we are willing to pay attention? Personally, I believe that - and not - depending on the day of the week.

Although I had been researching aging for several years before I began this blog in March 2004, and have been writing on aspects of "what it's really like to get older" for 20 months since then, right now all that feels like a prelude.

There is a strong sense of reaching a divide, of crossing a frontier into new territory. Perhaps all my protestations on this blog of embracing old age have been practice, preparation, and now I am ready for the real thing. Should I take after my great aunt and grandmother and live to my early 90s, I've got a quarter of a century of doing that in front of me.

The Timeline has only reached the present. As time moves on and events and photo documentation warrant, it will be continued.

Wow, you start work early in the morning! Have enjoyed your blog for sometime, thanks.

2. The spark and fire and curiosity in your "Now" eyes has not diminished from your early days. And there is just enough of a hint of a smile that says "I know something you don't". Good photo!

3. A couple of places it sounds like there is something very final going on here. Like ending the timeline today. ???

In answer to your questions, Winston:

1. There are some family photos going back to the late 19th century.

2. You may think it's a good photo, but I'm having trouble lately with that chubby face.

3. Well, yes - the Timeline has reached the present so an ending of sorts, but it will continue now and then when there is something to say.

Every now and then I take a memory drive past all my old schools and homes.

While driving, I talk through events, like "here's the bus stop where I broke up with my high school boyfriend," "there is the street I walked while on my way to my grade 7 grad. dance."

My mind goes back and forth. Who was I then? What have I learned? Where am I going from here?

Luckily I still live on Montreal island, or I'd be driving a looooong way to indulge in these tours.

True we could have 25-plus more years to accomplish goals.

Some people are happy hanging around malls in retirement. I see it as an opportunity to do something completely different.

Well, I plan to take that rock-hauling course and then start my own business.

From an adorable baby (love the placement of the ducky) to a beautiful mature woman, the journey you've shared has been filled with ups and downs, but I see peace and contentment in your face.

I love your idea of a pictoral timeline. I'll be watching!

What th' ?
You hook us all and now you're going to post "now and then"??
What the f are we who are hooked supposed to do now?!
I'm not taking this insecurity about getting my daily fix very well.

BTW you were one cute baby!
...and have remained so.

It's not that I'm cutting back on blogging. The Timeline, which is only one section of the blog - one category - to which I have posted photos on Saturday and Sunday for the past year - has caught up with the present so there are no more photos until something happens of note for which there is an image.

I'll still blog everyday - there just won't be updates to the Timeline every weekend. I'm sure I'll find other things to say on Saturdays and Sundays...

Ronni, I have really enjoyed going on the journey with you through the timeline. It sure brought up a lot of forgotten memories. It is my favorite part of your blog. You look beautiful int this picture of you today. Your eyes so shine with life. I will miss the timeline. But I know that everything you write will be interesting. I have neglected my blog, but you inspire me to get busy with it. Sali

Through several jumps and a lot of skips, I ended up here at your blog. I have to say, I really enjoy reading what you post, and your overall goal for this blog in general. I'll keep reading.
Also, maybe you'll find this interesting, if not something to waste time with.

Ronni thanks for the photo you posted of yourself today. When I saw it I was reminded of this blog post and the picture of Liv Ullman.

I found myself on one of your Timeline posts tonight. The next thing I knew, I was traveling down your memory lane fully expecting to stop at the next post, but ... never quite seemed to apply the brakes.

Found myself thinking, now, what was I doing at that time, as I often seem to do when I read accounts of events, people's activities in years past.

Recall when I first discovered TGB, reading the Manhattan Album post, then thinking it might be interesting to read some of the others sometime, but just never had, other than a few you may have specifically referenced in the months after I started reading you.

I really felt quite caught up in your story, written so simply, so succinctly with such feeling. Some of the ordinariness of life became quite profound, while other highly unique experiences seemed the ordinary.

Wonder if, perhaps, that may be true for many, some of our unique experiences are our ordinary daily life. To others with different experiences, our life may seem quite unordinary, theirs seeming the same to us.

Could easily find myself commenting on so much in Timeline, but instead will say, thank you, for the generous sharing of these parts of your life.

I've just found this wonderful slide show. What a wonderful life you've had so far. I'm hoping for many sequels.