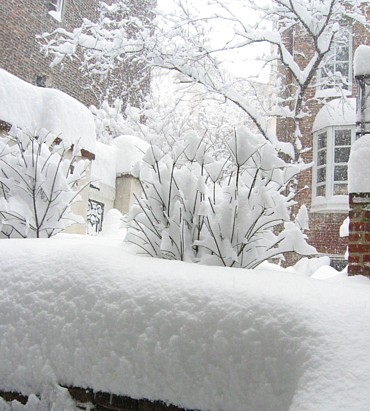 Those little two- and three-inch snowstorms are nothing but a nuisance, but when we get a big one, New York is transformed into a wonderland. This is my backyard about halfway through the blizzard. It got much deeper. The final count, 26.9 inches, is the most since record-keeping began in 1869. 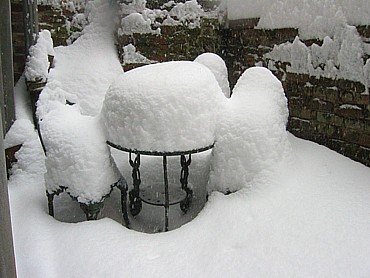 The snow piled on the patio table was almost as deep as the table is tall. 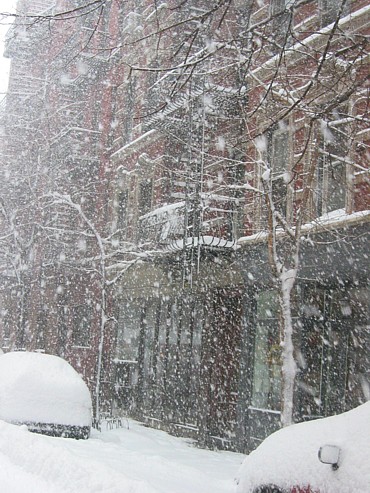 The wind was blowing so hard, I could barely remain upright while I took this photo of some apartment houses on my block. 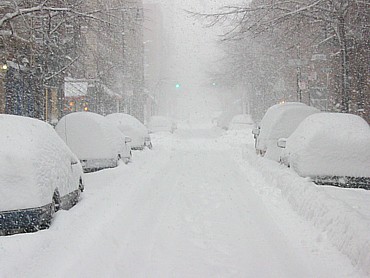 I was the only person out and about on my block while the snow was coming down this heavily. It was almost a whiteout with visibility of no more than a city block.

Giant snowstorms still thrill me as much as when I was a kid. At first light on Sunday, I bundled up and walked my Greenwich Village streets, the first person to make footprints on most blocks. I couldn't resist lying down on the corner of Bedford and Carmine to make a snow angel although it was already filled in ten minutes later.

Ollie the cat had never seen snow like this and he seemed to be amazed. It appeared that he picked out a falling snowflake and followed it with his eyes until it hit the ground and then started over with another one. But I couldn't get him out the door to play with me. 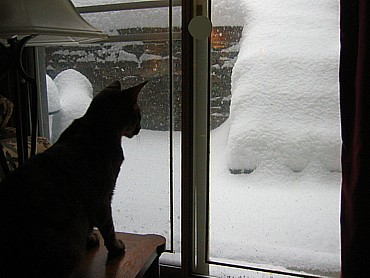 All day, radio reporters described the storm in such phrases as "terrible out there," "rough morning," "disastrous storm" and "paralyzing the city." Oh, please. Where is their sense of beauty, of magic, of wonder? And what's life without a delightful, unpredictable surprise now and again.

I'm with you Ronni - I think it just stunning! And when I was there and it was a white out, I loved it: so very peaceful with the traffic gone... [and you're on the money with the 1-2" time-wasters too]
Your pictures are wonderful - thanks Ronni.

Well, I am unfortunately far removed and across the country, but the child who lives within me is playing in the snow with you!

WOWOWOW - your photos are lovely. I am always so envious when I see snow like this. Prior to living in the Puget Sound area, I was in Atlanta. 3-4 inches of snow has beeen the largest snowfall I have ever seen! I made it to NYC in the early 80s for a visit just after a big one fell, but by the time I got into the city all that was left were the piles on the side of the streets following the cleanup.

I love to see it in photos, but down here, we are paralyzed for weeks if we get snow like that. My daughter in NY is very happy that she lives on the subway line to her ofc. and doesn't have to go outside this am to get there. Enjoy!

Here in the mountains where we want the snow and got nothing we are envious! I love snow, I love the way it makes the world magical and peaceful. We have not had a single decent storm this winter in an area that often has waist deep snow until April.

What beautiful photos Ronni. You guys really got hit hard; but I too love the look of fresh snow draping all the branches and homes. Of course the reality of having to make way to travel in it is another story. Now to just find a way to preserve the beauty, but not have it be such an obstacle.

What spirit you have.!

Truly spectacular! But brrrr. It's having to wear all those layers of clothes that puts me off your climate.

Beautiful! I love the snow and still miss it here on the westcoast, especially when I see pictures like yours. Have fun - make some more snow angels for me!

Beautiful pictures, Ronni! I was thinking about you all weekend and hoped you were safe and warm.

We never get anything so lovely.

A snow angel - haven't made one of those in years. 'Course, dirt doesn't make a very pretty one... I smiled big at the thought of Crabby flapping her extremities in the snow! I wished I could come and play!

Thank you Ronni for the beautiful photos. I miss New York especially when traffic stops for one reason or another!

I remember snowfalls like that as a kid and loved it too-- if you don't have to feed the cows or break ice on waterers in it (heck even then if it doesn't last for a month). But seems like our last winters here in my part of the NW, there has been no real snow. A few flurries and this year not even that. So thanks for sharing yours. Beautiful photos and cute with the cat

Wow Ronni! What beautiful photos! I do understnad the beauty and peace that overcomes a big city when a blizzard like this hits...the only problem is trying to dig your car out of the snow and navigating the slippery ice (both on foot and on wheels) to get back to work. I think I'll enjoy the Southern California sunshine instead (it was 78 degrees yesterday and lovely!) - Good for you though for enjoying the beauty and making a snow angel - Wow!

I'm a former East Coaster, now in CA. I was there for the blizzard of '94--and I remember sitting in my attic office and watching the winter wonderland happen. When I heard the weather reports yesterday, I wished I was there. I envy you your snow angel!

Great shots! Makes our 5 or 6 inches look like a dusting.

I was still living in Boston when the Blizzard of 78 hit. Our front door was completely blocked with snow and we had to jump out a window to get out of the house!

I love your photos Ronni! And I agree with you, snow is magic and makes things beautiful. I find that it has a peculiar quality of silence too.

Absolutely gorgeous pictures.....I can all most feel myself there! You live in a beautiful area...........

I love how new snow makes the neighborhood look so clean.

I went out early in the afternoon to Blizzard Blog from Bleecker and Christopher:

I still had snowflakes hitting me in the eyeballs by that late hour, so I can imagine what the wind must have been like in the morning.

Wow - beautiful pictures. That's where I like it too - in pictures. Brrr.

Gorgeous photos! It is so easy to sink into not wanting to deal with cold weather - I love the magic of snow, and thank you for reminding us and for sharing it!

Great pictures. I have a collection of snowy New York photos taken over New Year 2001, but I think yours are several inches deeper!

Sadly, we don't do snow down south in the UK any more. I'm not sure when it was voted out, but I certainly wasn't party to it.

Beautiful snow pictures! I too remember the silence, the crispness in the air, a whole new wonderful world in snow country.

We could surely welcome snow in our So. Cal mtns; none at all in the ski area near us this season. Please, some more rain, too.

I really have enjoyed your blizzard photos.I think I have as many photos of snow as I do of fall because of the stark beauty of it. I have enjoyed your blog and have been going down the list of your favorites. My favorite so far has been The Blog Brothers. my best winter photo this year is http://musingsofanoldman.blogspot.com/2006/01/crabapple-tree.html . Loved the contrast. Keep up the good work. Great read

Hooray, for you, in making the snow angels, Ronni. Way to go!

Love the photos! I wish I could buy your place. I'd love to live there, and this post made me want to that much more.

They made me think of Boston in the Sixties. (That was the last city I lived in where it snowed.)

The first few hours after a blizzard are miraculously quiet and clean, which is a rare treat in any city.

I hope you find a purchaser for you place in the city this Spring. It will be interesting to see what transpires when you move to the country.

Your writing continues to enthrall me, even when I don't agree with you. :)

Keep up the battle against ageism. You are being heard and it is just a matter of time before a chorus of voices will pick up the banner and drive home some social changes.

Meanwhile, continue to keep your sense of wonder alive.