[EDITORIAL NOTE: Today, in honor of his mother and mothers everywhere, Limerick Savant has published the Limerick of All Mothers Marathon with some excellent contributions from other grown blogging children and of course, his own limerick ode to mom. Do stop by.]

Hi, there, blog readers. Oliver here. Claude of Blogging in Paris and Chancy of driftwoodinpsiration asked what I think about the upcoming move from the only home I’ve ever known. You might guess that it's not the best fun I've ever had.

In case you’ve wondered why I haven’t blogged for so long – well, you try living with this much work and this mess and still keep your head about you well enough to write. I’m so exhausted at the end of each day, I can’t even do my middle-of-the-night wandering and web surfing.

See, it’s Ronni’s job to tape up the boxes, then I have to inspect every one of them. Every single one. It's a big job, checking each corner and seam to make sure she’s done it right so our stuff won’t fall out on its way to Maine. If she had her way, she’d just slap on the tape and fill up a box. I keep telling her, you need be careful about these things. 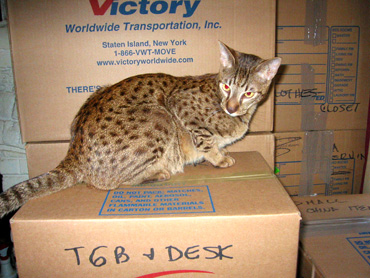 It’s hard now too to get in a good run anywhere. There’s always a box blocking the course. They’re everywhere. And my toys keep getting lost behind stacks of boxes. I have my own way of organizing my things, but Ronni doesn’t give that much respect now. And the other day, she moved my litter box to another room. Now I ask you – how would she feel if I moved her toilet…

Even with all this disruption, I’m getting excited now. Ronni says our new home has a much longer stretch for me to run and there are more rooms than we have now. Yeah! More places for me to hide - heh, heh, heh - when she wants to stuff me in that carrier bag to go somewhere.

In case you were wondering, here’s the moving schedule I worked out for Ronni:

24 May: I go to stay with Uncle Alex. It won’t be as bad as it was when I’ve stayed with him in the past because Ronni will be there too. (Here’s a little secret; Uncle Alex is Ronni’s former husband, but they stopped being married in 1971, and they get along pretty well now.)

25 May: The moving van picks up all our stuff. They better not lose it. Some of my best toys will be on that truck.

31 May: The closing on the New York apartment. I think that means someone gives us a lot of money but it also means I’ll never see my first home again and that makes me sad.

2 June: Ronni goes to pick up our new car in Pennsylvania and drives it to New York on 4 June. That's two nights she'll be away and she said I can't go with her. But at least it's not nine whole days like last November.

6 June: We drive (together this time!) in the new car to Maine. Ronni says she’s going to “trank” me so I’ll be snoozy during the whole trip. She promised this won’t be a bad thing.

8 June: Ronni goes to another closing to buy our new house. I think that means she spends a lot of the money that other guy gave us.

9 June: We move into our new house.

Whew! All this busy-ness won’t be done too soon for me. Claude, Ronni told me that you’re planning a trip all the way across the Atlantic Ocean to visit the United States. My ancestors crossed that ocean too, although they’re from Africa, not Europe.

Ronni also said you’ll be coming to Maine to visit us there. It will be nice to meet you, and thank you - and Chancy too - very much for asking how I’m doing through all this mess. It's been so long since I wrote anything here I thought everyone might have forgotten me.

And now, I'm outta here. I need another nap - although it's hard to find a comfy spot with all the boxes taking up so much space. 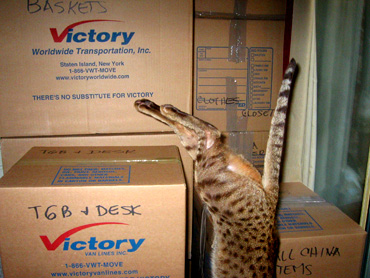 Ollie, it had been a long time since I'd seen a photo of you. I am sure you are going to love the new place, but I'll grant you that moving is no fun! I'm looking forward to meeting you in the flesh (although you look pretty skinny to me) maybe in the Fall. As soon as I can get myself a passport.
And you're lucky Ronni will be able to 'trank' you! You are one reasonable cat.
My daughter's cat Mounir won't swallow a pill, no matter what we do!
PS: I love the last photo

Dear Ollie,
Your post was so interesting that I read every word to Molly and Ada. They went through something very similar to you last year when we moved to Philadelphia from Buffalo. They both sat in their favorite places as I read them the whole story about your not finding your toys, the exhaustion at all your hard work and even about how the move schedule will go. They just kept shaking their heads, licking their paws and bouncing their heads up and down resonating with your every word.

Molly was particularly impressed with the last photograph of you "getting out of there" for your nap. Both Ada and Molly have tremendous respect for napping.

They both wish you a bon voyage and happiness in your new place. They said the seven and a half drive to Philly wasn't haf as bad as they expected and they did it without "tranks." So imagine how great it will be for you with the "tranks!"

Good luck, Ollie! It was fabulous to hear from you again.

Hello Ollie...It was so nice to see you again. You're one handsome cat. Marcel, Ralph and Foster send you all their kitty best wishes on your upcoming move. Wishing you and Ronni many years of happiness and good things in your new home.

Hi Ollie...so glad to finally hear from you again. I know it's been a little crazy for you lately with all the boxes and with Ronni running all over the place to make this move happen; but think of how wonderful everything will be once you settle into your new place. Ronni's right...you will just LOVE it. Just be patient for a little while longer, and whenever you can, nuzzle up to Ronni and let her know how much you love her and appreciate what she's been going through. Okay? It's a big change for her too, and she could use a little extra Ollie-love. Hang in there, and know that we are VERY excited for you and Ronni. It's going to be SO great! Lots of love, Joy

Hi Cranky Old Cat, it's me, Crystal the cat. Just some advice about the "trank" from a veteran of many a car trip. Virginia's vet, that mean old witch who pulled my claws out, told her that my weight would let me snooze happily on only half a "trank." She gave me a half of one, and I can tell you it was not a cozy or snoozy ride. I was rattling and bumping around in my cage for hours and I did not like it one bit. I let Virginia know, too, by giving her a concert of my best yowling for several hours. I hate riding in cars, don't you?

Hi Ollie,
Just a gentle reminder from an old Jewish grandma. I hope you helped make your dear Mom's Mothers' Day very special. She deserves it!
petting and scratches,
grannylucyd

what a beautiful cat, fun pictures-- a post to leave a smile after reading it.

Just a minute. Is there time to negotiate on the plan for June 2? I should think that Ronni would want her new car to pass your sniff test before plunking down her money. See if you can talk some sense into her! BTW: Middles of boxes make comfy snoozing for me. Try it--you might like it. Jelly and I are sending lots of purrs and nose-licks your way for the big adventure.

Ollie, I am delighted that you took the time out of your super busy schedule to bring us up to date on all the moving stuff. I mentioned before but I want to reiterate one important point. Make sure Ronni saves you a BIG box when she is finished unpacking. Great place to hide, rest and enjoy your privacy.

Maintaining that sense of humor during life's challenges is what keeps us whole. Great photos, sexy looking cat.