Wednesday is market day in Portland, Maine and every week since I moved here in early June, I have shopped at the farmers’ stalls in the early morning before the produce and flowers are picked over.

I can’t eat as much as I once did – must be something about getting older – and I haven't learned new buying habits yet, so I always get too much; so many good things to eat and so little stomach space. I’ve been meaning to take you on a photo tour for the longest time and I finally remembered the camera yesterday.

There was a hybrid pea this summer I had never seen before, a cross between Chinese peapods and sugar peas that grows flat and twisted and is as sweet as candy – best raw in salads, but good when steamed too. They have to be enjoyed quickly; their season is only two or three weeks in July and August.

Many farmers here specialize in heirloom vegetables, so I’ve been trying new (to me) kinds of tomatoes along with a cucumber which grows in a spiral shape and is half the diameter of the standard, waxy supermarket variety. I’ve come to favor cute little sweet peppers the size of shallots that are available in green, yellow, orange, red and purple.

Blackberries are gone now for the year, but the second growth of raspberries is still going strong and Keith, who mans the stall where I buy mine, says they will be around for another two or three weeks.

The market is smack in the middle of downtown Portland in Monument Square where protests and musical performances are held at other times. Yesterday, I found this colorful array of root vegetables. 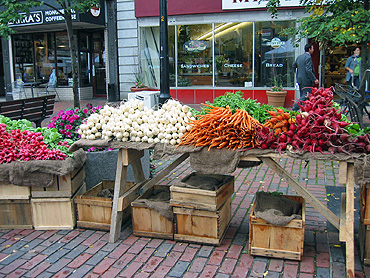 That pile of white is baby turnips, the flavor of which is less strong than their larger relatives. Steamed and mashed with some butter and garlic, they are a whole new taste treat. But I like them cut up raw in a salad too.

I usually buy lettuce at Freedom Farm. The varieties are robust and crispy, and reports of e.coli notwithstanding, I bought some spinach yesterday – the wrinkled kind you can’t find in supermarkets anymore. 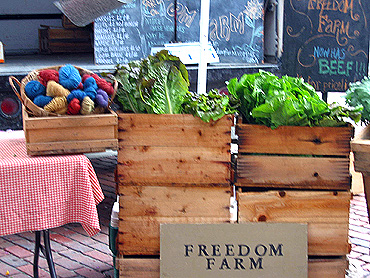 It fits with Freedom Farm’s well-tended vegetables that they also sell hand-dyed yarn spun from the wool of their own sheep.

Autumn begins on Saturday, but the remaining watermelon were reminders of summer almost past, and the squash is in greater supply now. 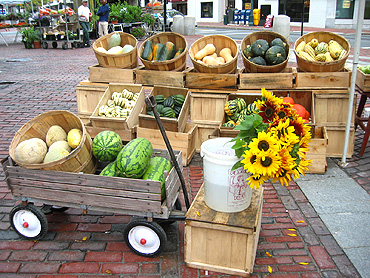 Pumpkins of all sizes were at nearly every stall this week. I like the ones on the left, a slightly off shade of orange I’ve never seen before to match their not-quite-pumpkin shape. I’ll buy one or two next week. 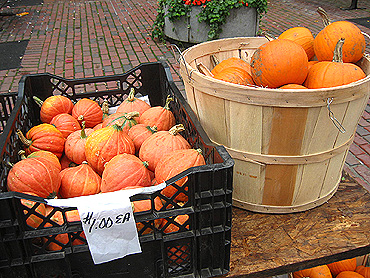 If pumpkins don’t convince you fall has arrived, the rows and rows of mums will. It appears that all local farmers also grow chrysanthemums. They are a lot less expensive for a pot the size of these than in New York… 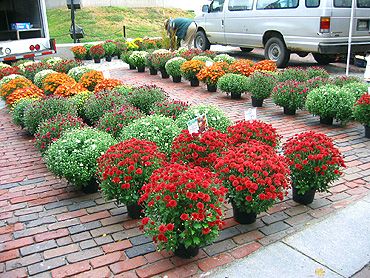 …but I opted instead for these more exotic Chinese lanterns to show off the new cupboard which fills a wall space that was looking entirely too empty. 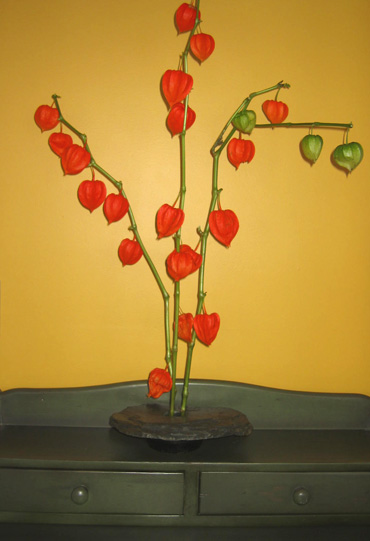 I can see how it would be very easy to buy too much! The colors are so vibrant also.
I have taken to growing several varieties of cherry tomatoes. Their flavor is unmatched! I can eat them right off the vine (while picking, even) use on salads, or make up a quick batch of pico de gallo.
Love the photos!

Lovely photographs. Whenever I see (or more rarely, visit) a Farmer's Market, I develop admirable intentions of eating better. Everything looks appetizing and fresh and beautiful.

The Chinese Lanterns are so beautiful and graphic.

Gorgeous. Autumn (almost) in New England.... I will be going from my home in Boston up to Vermont one of these weekends to take in the color.

Apropos of nothing in particular 'cos I can't remember what I came here for, you might like to look at : http://septuagent.typepad.com/seventy_and_rising____/2006/09/not_dead_yet.html

Well, it made me laugh anyway.

WOW! Can you say ENVY?

Ollie will have fun with the lanterns for sure...I can just see it now.

What a beautiful arranged and pleasing to the eye farmers' market. I also love them but not all take the time to be so picturesque. Love those wooden boxes.

Wow! I didn't realize that you live in Portland. We moved here in March and love it. When you made the blackberry/raspberry comment - I thought she must be in the Northwest. Very nice photos of the market. Missed your post yesterday, but I really appreciated what you had to say. I often tell my duaghters that they just do not appreciate where we have come from and how much more needs to be done for women's equality.

Loved those pictures of the market. What a colorful, neat and organized place.

Nothing like what you would see at Faneuil Hall Market place in Boston. Haven't been there in years but as I remember it, it was noisy messy and the salespeople, they were colorful!

The colors are wonderful, Ronni, so intense!

These photos had my mouth watering. Some really interesting veggies, beautiful flowers, and those Chinese lanterns most striking.

I kmew that Millie would like those sunflowers. Those are beautiful photos Ronnie. Lucky that you get to buy your produce there! I wish we had a market. I'd go.

The beautiful photography is worthy of an old masters still life. You are an artist with the camera.

Since this is the Jewish new year Ronni, I wish you continuing discovery and delight in your new home. And for us, continuing enlightenment and mental stimulation from your blog.

Those oddly-shaped pumpkins look like Red Hubbard squash to me. They are closely related to the Blue Hubbard variety. They usually keep well past New Years in a cool cellar.