No jokes now, please, but old ladies and cats seem to go together. If you have lived with cats most of your life, you probably, like me, flatter yourself that you understand the obstinate little creatures. You would be mistaken.

Just when you think you’ve got their number, they come up with something so unfathomable to tease or irritate you, that you are humbled by their ingenuity.

Oliver has taken to his new home in Maine with enthusiasm. He has a lot more room to run and as the number of squirrels, cats and birds in our neighborhood appear to outnumber people by magnitudes, he spends most early mornings, ca-ca-ca-ing at them out the window while I post the day’s blog, answer email and read the news.

When he is not napping during other parts of day, he has a large collection of toys. Some are store-bought, others are small household items he has adopted as his own. There was a time he favored my fleece-lined, wooden clogs which he grabbed and threw into the air. I forestalled the possibility of broken windows by finding him his own scrap of fleece and fortunately, he seems now to prefer that over the clogs.

I bought this toy for Ollie because the leopard design matches his coat and he had previously shown great interest in feathers. This one has magnificent feathers and if I were a cat, it would be a favorite. But nooooo. I throw it and he looks at me like I’m nuts. I play with it more than he does.

Although I detest the icky green color of this toy, Ollie’s esthetic tastes differ from mine and he has many a good romp with “Marty Mouse.” He seeks it out most often in the evening than daytime. Maybe the color is less blinding then.

But Ollie’s all-time favorite is this little mouse covered in what appears to be and I hope is rabbit fur (otherwise, I’d rather not know) with three feathers attached to its ass and a rattle inside.

Fur, feathers, noise – what more could cat ask for in a toy – and I’ve been supplying Ollie with these for two years. I haven’t been able to find them in Portland pet shops, so I called Louis, the proprietor of my previous pet store in New York, and he sent about 25 or 30 of them which I thought would be a year’s supply.

I suspect now I’m wrong and we’ll need to call Louis again much sooner due to Ollie’s newest obsession.

For the past two months, I wake most mornings to at least one bedraggled mouse in his water bowl. What’s up with that? I guarantee you that fishing a drowned mouse out of the water bowl is not the most fun you ever had before breakfast.

On any given day, there are two and sometimes three mice drying out on the counter and Ollie doesn’t appear to care, later, whether a mouse has been drowned and dried or is new. They’re all the same to him.

Until a couple of days ago, Ollie had drowned the mice at night. Then, just this week, he switched from stealth mode.

I watched as he retrieved one from under the sofa. He walked purposefully to the water bowl, carefully set the mouse on the floor and sat down. After a minute or two intently pondering the mouse, he picked it up, dropped in the bowl, peered at it, poked it once or twice and settled down to eat some crunchies – apparently having completed his task - whatever the purpose could possiby be.

Now what do you suppose is going on in that walnut-sized brain of Ollie’s? Most of time, if you put yourself in a cat’s place, you can see the entertainment value in what they’re doing. On this one, I’m befuddled. 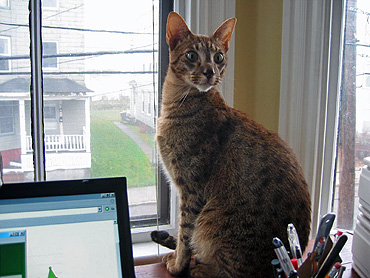 He is such a beautiful cat and obviously thinks of things beyond the minds of mere humans. I love it!

Weeeeird. Do they have catnip in? Maybe he's trying to flavor or freshen his water, or get it changed.

But I doubt it. I suspect it is, as you say, one of those unfathomables.

I am just sitting here shaking with laughter. I can picture Ollie doing this Very Very Important Mouse-drowning Task day after day, and I can picture you watching him and shaking your head! I think cats are totally unfathomable and their inscrutabe expression combined what you KNOW to be a teensy little brain makes this even more so.

The other day, our regular feline visitor Troy got himself worked up into a total frenzy of terror over a rolled up umbrella that had mysteriusly appeared (read: been tossed there by husband as he came home from work!) in the lounge. He sank down into leopard-crawl mode and approached it in slow motion with his nose extended but all his weight on his back legs for a quick getaway. And then I made the mistake of twitching the umbrella - oh dear! Talk about vertical take-off! Feeling bad, I put the umbrella in the cupboard to calm him down - but this worried him even more - where had the Mysterious Evil Thing gone?? What his furry lizard-brain was thinking is anybody's guess...

Laura: No catnip in these mice. Just that mystery fur, feathers and a rattle.

At least the mice dry out and are re-drownable. One of my cats like to gut them, and they're never quite the same after that. And the rabbit fur mice at our nearby purveyor of cat toys have been replaced by synthetic ones, and they just don't hold the same charm in the cats' eyes.

Ronni - you have probably already said in previous messages, so I apologize for missing it, but what kind of cat is Oliver? He's really striking looking.

Ollie is one incredible cat! You'll never guess what he is up to. I must still have a couple of photos of him. Have to fish them out ;)

Susanne: Oliver is a Savannah cat. You can read more about them here.

My cat, Mason, loves a small, red, fuzzy yarn ball. He likes to fetch it for me and usually wants to play at 4AM. If I don't wake up and toss it for him, he romps with it on the bed until I do. I have found the red ball in my purse, the toilet, the tub, his drinking water but mostly under hard to reach furniture. How could we live without these fascinating creatures.
Ardis Bourland

I think when considering Ollie's obsession with the feathered mouse we need a multiple choice answer as to what his purpose could be in dropping the mouse in his water bowl:

A: Ollie considers drowning a humane way of disposing of a Mouse

B: Ollie doesn't like the odor of the Mouse after batting it around for a day or so; thus the water bath.

C: Could it be Ollie considers this act "water boarding?" Or a form of torture?

D: Ollie is showing the little critter who is boss.

E: Ollie has invented a fun game to entertain both him and Ronni.

Ollie is playing with your mind. He's waiting until you are totally engrossed in figuring this out to the point you lose sleep over it at which point he'll simply abandon it and start with something else. Humans are cats favourite toys :)

With looks like that, who needs brains? He's so handsome!

That really is an odd thing for Ollie to do. At least he isn't a boring cat.

I loved this post. I, like you, have lived with cats all of my life. They bring me great joy.

Target sells these really cool pink tunnels that are sold in sections. You can make them as long as you like. They are inexpensive too.
My two girls have great fun in theirs.

I'm a doggie person, but this story would be enough to make me want a cat if I wasn't allergic to most of them. That Ollie is some great to intrigue a confirmed old dog-lover.

Thanks Ronni. Fascinating.
In my old neighborhood, we had an orange tabby stray. He was neutered, so apparently he belonged to someone who cruelly abandoned him. Our whole neighborhood took care of him, including the many dog owners, who also put food out for him. Some, who were able to, took him into their homes during the bitter cold winter nights. I don't know what his original name was, but we all called him "Goldie" and he always responded to it.

I love Ollie, we never know what he'll come up with next to entertain you (and us!) Ollie would love my place, I have 2 parakeets and a Morning Dove, Butthead, Sunshine and Simone. I'm sure Ollie would try to drown all of them.

Oliver has grown into such a handsome fellow!

Our Sergei loves the little rattle-bellied fur mice that we scatter about our house. He tends to gut them fairly quickly, but is content to play with their skins even after their plastic bodies are gone.

Our Lyra sometimes yells at her toys when they just lie there on the floor without moving. Perhaps Ollie drops the mice in his water bowl attempting to get a reaction from them.

My cat does that, too, after chewing the tails off of them first. Who knows why they do anything?

Wr always had cats when the kids were growing up. Ours used to gut their catnip mice and eat the catnip and stumble around stoned.
I finally stopped buying them.

How weird is this?? Me and my work friend were just discussing this subject, ie. my cat and her two cats also drown things in their water bowl. We were amazed that our cats did this, but now here's this blog saying that lots of other cats have this trait too!!! I think we're just going to have to accept rescuing and drying out these toys. I love cats!!!