This isn’t about aging or elder movies or anything at all today about getting old. It’s about adaptation and survival – a terrifically good story to remind us that even in that most concrete of urban jungles, mother nature will find a way to overcome...

Once upon a time in the 1960s, some people speculate, a crate of parrots from South America broke open at Kennedy airport allowing the birds to escape. Now, 40 years later, they have long adopted the “wilds” of New York and New Jersey as home:

"They eat berries, ornamental plants and sometimes pizza," [Steve] Baldwin said as he gave a tour of the Brooklyn College nests to a dozen birders. "They are very intelligent, and of course they don't like the suburbs."

The parrots live together in large colonies. “Their nests are vast 400-pound constructs, with foyers and anterooms and a space where the females lay eggs and enjoy a respite from the males,” reports the Post. The nests are so large that some wag has referred to them as condominiums, and power company employees are accustomed now to working around the nests built on electrical poles.

Steve Baldwin has created an entire website – brooklynparrots.com – where there are hundreds of photographs and stories about the birds.

There is a lot more wildlife around my new home in Portland, Maine (including once, a moose walking down my street), than I noticed around New York City in my 40 years of residence there. Apparently I just wasn't looking in the right places.

Here’s some good health news to start the new year with.

In the latest National Long-Term Care Survey funded by the National Institute on Aging (NIA), chronic disability among elders has dropped dramatically. The numbers are amazing.

The link above is to the press release. You can read the entire report here.

Richard J. Hodes, M.D., who is the NIA director, says:

“This continuing decline in disability among older people is one of the most encouraging and important trends in the aging of the American population.”

“The challenge now is to see how this trend can be maintained and accelerated especially in the face of increasing obesity,” says Richard Suzman, Ph.D., director of NIA’s Behavioral and Social Research Program. “Doing so over the next several decades will significantly lessen the societal impact of the aging of the baby-boom generation.”

Elders regularly report that their biggest fear about aging is becoming a burden to others by which they usually means being disabled to a degree that requires regular help and is a permanent condition. The study defines chronically disabled somewhat more loosely:

The drop in numbers of the chronically disabled is good news individually, but also for Medicare costs in coming years as the baby boomers get older, swelling the ranks of elders.

[A TGB EXTRA: I look forward to bLaugh every day and today's panel is a marvelous moment of zen. Chris and Brad title it THE GOOD OLD DAYS.]

Before moving to Portland, Maine last June, I had lived in my apartment in Greenwich Village for 23 years. When I bought it in 1983 it was, in my 42nd year, the 42nd move of my life which tells you a bit about the restlessness of my early years. But I learned in those years that there is no better way to clear out the detritus than to move. Who wants to add to the weight the moving company will charge for, for things you don’t need anymore.

So when I was packing for this 43rd move, I was ruthless in dumping two decades of what George Carlin famously calls “stuff”. Well, sort of ruthless. There were three items which, as my arm moved each toward the trash bag, I couldn’t part with.

All three had originally been my mother’s: a particularly ugly jewelry box; a little, metal container for rolls of stamps with her initials engraved on it; and her address book – small, green and, after the thank yous following her memorial service, useless to me.

I don’t know why I can’t part with these three items and I still have them. Today, I am reminded of the address book and of all the times I have wrestled with myself about removing – or not – the names of people in my own address book who have died.

There have been way too many over the years and particularly back in the days when I kept contact information in books like my mother’s instead of on the computer, I would see the names of the dead from time to time and tell myself I should cross them out if for no other reason than to make it easier to find who I was looking for.

But I never did. I didn’t want to erase them from my life like that. Sometimes, although not always, when I was transferring everything to a new address book (remember when we used to do that?), I would even copy them over. Nowadays, I just leave everyone in my electronic address book – dead or alive.

But today, I am confronted with a new, although similar, question.

Over there on the left in the Elderbloggers blogroll is a link to Donald M. Murray, weekly columnist for the Boston Globe, who died on 30 December. He wasn’t really a blogger, but I included him because there is (oops – “was”) no one else alive writing so eloquently about getting old.

I am heartbroken that there will be no new columns from Mr. Murray and my dilemma, as with address books, is what to do about his link. It goes to the page where the Globe lists his four most recent columns until they moved the oldest, each week, into the paid archive. Undoubtedly, after a reasonable period of time, they will remove that page and the link will be useless.

But I am loathe to lose his name from the list. On the other hand, I don’t want dead (so to speak) links hanging around my site which make any blog appear unkempt and out of date and, after all, the living must go on.

[EDITOR’S NOTE: Claude of Blogging in Paris has honored me (or is it Ollie the cat?) today by promoting to her main page a New Year’s Eve cat story I left on her blog as a comment. It’s funny, if I do say so myself.]

[UPDATE: Amazingly, there is one more column from Donald Murray which he turned into the newspaper last Friday. A beautiful finale.] 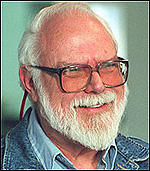 His “Now and Then” weekly column was the best writing on aging anywhere in the mainstream media drawing on his life experience as a reporter, his love of writing itself and the ins and outs, ups and downs of getting older. The subtitle of my blog may be “what it’s really like to get older,” but compared to Donald Murray, I have not yet got anywhere near the heart of it. I looked to him every week for inspiration both on my own aging and exquisite writing.

I understood completely when Donald Murray wrote, in his final column published on 26 December:

"Each time I sit down to write I don't know if I can do it. The flow of writing is always a surprise and a challenge. Click the computer on and I am 17 again, wanting to write and not knowing if I can."

Then he quoted from that other exquisite essayist, E.B. White:

"I'm glad to report that even now, at this late day, a blank sheet of paper holds the greatest excitement there is for me - more promising than a silver cloud, prettier than a little red wagon. It holds all the hope there is, all fears."

And Donald Murray finished his last essay with a message that should we can all take to heart, it seems to me, for the new year and every year granted us hereafter:

"Friends wonder why I do not take it easy. Why I don't play golf or walk through cathedrals in Italy. Because I have an obsession. I write. I draw. I try to capture a fragment of life and reveal its wonder to you. I never get it quite right, but there is a joy in the trying that makes me young at 83.

"My New Year's wish for you, old and young, is that you find in the year ahead something you can't do."

There is more about Mr. Murray in the Globe obituary, with links to some of his most recent writing. If the newspaper or his heirs do not publish a new collection of his weekly essays, I will be as deeply disappointed as I am at his death. They are all of the sort than can be read again and again with deep, abiding pleasure.