As she pointed out to me in an email last week, Millie Garfield of My Mom’s Blog and I first “met” online almost four years ago. We reference one another’s blogs, we have sometimes been quoted in the same newspaper stories, we appeared in the same program on Retirement Living Television and we speak on the telephone.

But even though we live on the same coast not all that far from one another – she in Boston and me in Portland, Maine and before that New York City - until last Friday we had never met in person. 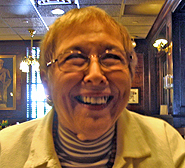 Because I needed to be in Boston on business last week, we arranged to meet for lunch at Joe’s Bar and Grill in Woburn along with her son, Steve Garfield, who blogs at a number of places and is undoubtedly the number one video blogger and vlogger evangelist in at least the U.S. if not the world.

Millie is no slouch at vlogging herself. Her “I Can’t Open It” series is a web classic and she’s more recently been teach Yiddish in a video series.

Millie has often been heard to say that one of the things she likes most about blogging is that no one interrupts her when she’s speaking (writing). Except me. I think I did some interrupting at lunch and Millie was gracious enough not to point it out to me.

As I mentioned last week, meeting online friends in person always feels like seeing an old friend. And so it was with Millie on Friday. There is no getting-to-know-you time because we already know each other better than non-bloggers would probably understand.

We spoke about how we spend more time with our online friends than with our local friends (whom we might see only occasionally) through reading one another’s blogs, discussing what we’ve written in comments, exchanging email and sometimes talking on the phone. There is fodder here, I think, for someone’s doctoral thesis one day. This is a new kind of relationship that transcends the pen pals of our childhood probably because of the immediacy we did not have with snailmail and the camaraderie that develops among those bloggers who hang out in the same blogs.

One of the terrific things about Millie is her laugh, and she is always ready to laugh. If Millie could bottle her good humor, she’d be right up there with Warren Buffet and Bill Gates in the Fortune magazine list of richest people. But that doesn’t matter, we are all richer for having Millie in our midst.

And meeting her in person Friday makes up for my jealousy of Claude of Blogging in Paris and savtadotty of Cousin Lucy’s Spoon who met in Paris recently.

Millie is the elderblogger extraordinaire. It is so good to have finally met her in person and Steve caught the moment in a much better photo than mine above from lunch. 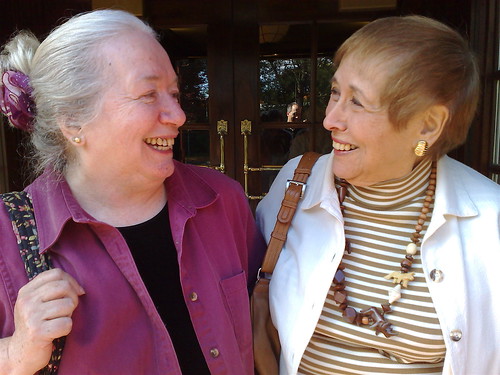 [Over at The Elder Storytelling Place, Nancy Leitz explains how frugal living leads to a long life in Aunt Sue and the Electric Typewriter.]

Meeting online friends is great -- blogging or otherwise. It is exactly as you described it, Ronni! I always describe such meetings as old friends who never met! And how I envy you and Millie!

I don't know if you've heard yet, but you were by far the hit of the show when we focused group tested our pilot of "Viewpoint" during the past two weeks. Every group we met with thought your comments were spot on and they loved your delivery. Kudos. We will be determining the next steps with the show in the coming week or two and will be in touch for more visits from you in the near future.

Thanks for always keeping us in front of your blog's audience. It's turning out to be a great partnership.

What a cute photo of you and Millie, I love the expressions!

Now, I am the one who is suffering pangs of bloggy friend envy....

You two look as if you had been friends forever.

A great photo of the two of you. How I would have loved to be there with you. You are such good company that we would have had a good laugh!

Just the other day a friend of mine said blogging must be like having a pen pal. I disagreed but didn't have a good answer for her at the time but I do now.

Ronni, you described the difference perfectly. There is an immediacy that brings people closer, no waiting for snailmail.

Look how it works for all of us!

Having met Millie in person last year, it's easy to understand why you enjoyed it so much. I'm glad you both finally had the chance.
And you're SO right about blogging friends...I've met a few now in person and each one makes me feel like I've known them forever.
Now I'm off to Claude's blog to read about her meeting with a blog friend.
Best to you, Ronni.

I'm r-trying hard not to be envious! I want to meet you both!

What a great picture! Looks like you two had fun.

What a wonderful photo that exudes pure joy. I, too, am envious. You are obviously not only intelligent, fun loving people but are very photogenic. I had better go catch up with Millie on her Blog. Ta ! Ta!

Ronni - I love your line - "This is a new kind of relationship that transcends the pen pals of our childhood ..." You are so right.

As for Millie, she is one of the warmest people in the blogosphere and that shines right thru all of her posts, vlogs and podcasts. Meeting Millie (and you too at the very first BlogHer .. where you stole the show!) is something I hold dear.