There are 16 windows in the home I bought last year in Portland, Maine, which is only a little older than I am, built in 1899. The 16 windows were also that old. Some opened, some didn’t, some were missing screens or storm windows, one had only a storm window and two that did open, sometimes closed unexpectedly with a crash that sent Ollie the cat for cover under the bed.

And so last month, at a cost that choked me to write the check, I had all the windows replaced with the new, vinyl sort that meet Energy Star requirements and can be cleaned by opening them inward.

These are a marvel of modern engineering and ease of use, but more important to me and Ollie is that they all open now and all have screens. I get the benefit of pleasant sea breezes and Ollie can watch the world go by from every vantage point in the house. I am certain he would like to join the many neighborhood cats who are allowed to wander, but – well, too bad, Ollie; you’re stuck with ka-ka-ka-ing at the birds, some of which are as large as Ollie himself. 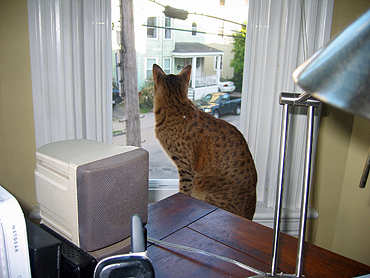 Sometimes Ollie will deign to acknowledge me when I call his name, but his attention is on the street life, especially first thing in the morning while I am posting to the blog and answering email. 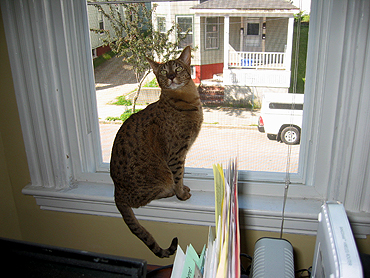 As tightly as these new windows fit the frames, some bugs do get in and now Ollie has become the great spotted bug hunter. He can spot them from three rooms away and none escape his pounce. 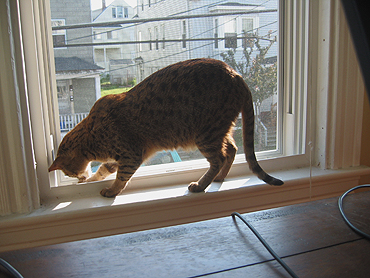 Another modern innovation I had known nothing of for 40 years in New York City is having my own washer and drier. Want something clean right now? No need to go down the block to drop it off at the laundromat; just take ten steps from the kitchen and it’s done within an hour.

What I had not anticipated, however, is how much I loathe folding laundry. In New York, it was returned to me ready to put into drawers. Now, in Maine, that I’ve got over the thrill of having clean clothes on a moment’s notice, I am prone to leaving it in the drier until, with a sigh, I set myself to the dismal task of folding.

Such was the case last week when I opened the drier to find a splendid surprise, big enough to give me the impetus to retrieve the laundry with a little more speed in the future. Can you tell from this photo what I’m talking about?

Here’s a closeup. They tell us money doesn’t grow on trees, but maybe it does grow in the drier. Or perhaps it’s just payment for all those socks the drier eats to keep itself in working order. 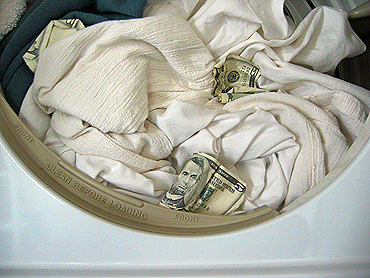 [At The Elder Storytelling Place today, Betsy Devine writes the Portrait of a 1918 Blogger.]

I love Ollie's aristocratic look. And I hope you treated yourself to something nice with the unexpected money lost and found.

Please, Ronni, could you tell me which brand your drier is, I'd love to get the same one. ;)

Ollie is so cute. I love cats. Great post. I also hate folding laundry and love windows everywhere that can open :)

New windows? What's that? Here in Boston I've never lived in a house younger than, like, 50 years, and many older. I'm envious!

I've recently figured out that one of the things that makes me "un-American" is that I have never lived in a house built after about 1920 -- ever. I grew up in one built in 1916 and that may have been the most modern of the lot. This is a real difference from many of my fellow citizens I think. Not sure it does, but I am sure our surroundings shape our consciousnesses.

And I too envy those windows. I find I can no longer make myself enough of a pretzel to wash my old double-hung ones.

Wow! I wish I could find a few bills in my dryer. All I get is lint.

Ollie must be very happy that you moved and had new windows installed. Cat heaven!

Kman is The. World's. Worst...at leaving change in his pockets.

If I don't find it at the bottom of the washer tub, then it makes itself very apparent in the tumbling steel dryer tub.

Problem with loose change - it can get caught sideways, etc, in moving parts and cause all sort of expensive repairs.

Your dryer obviously is better than anything DaVinci could ever devise...money from hot air *smile*.

I have heard of "cold cash" but "clean cash" is a new one on me.

Looks like whenever you do the laundry you will "clean up." ;)

The only thing I hate worse than folding laundry is cleaning an oven. I have 2 - one is self-cleaning and one isn't. I always seem to use the one that has to be cleaned...LOL
But I do love to find money in the dryer, and it makes folding the clean stuff worth it - even if the money was mine to begin with...LOL
I envy you the new windows. We need them too.

Ronni I am overjoyed to find new photos of our pal Ollie. He is looking fit and happy and as playful as ever.

As to the cash you found in your dryer, you may want to check it out with your bank.

"In the language of crime, HOT MONEY refers to stolen currency that can easily be traced back to the crime, such as marked bills or new currency with consecutive serial numbers"

In our house its that hope of finding freshly laundered dryer money that makes that chore bearable. I always say whomever gets those clothes out and folded earns that money. I usually am the one to get the money, but I secretly think I am the one that leaves the most in my jeans anyway.

My friend Laura says "Laundry never gets done, it just MOVES."
Mine get folded ok, its the sorting and putting up that is so tough for me.

My cats are scorpion hunters thank goodness. If they don't kill them outright they "point" to them for me so I can do the job myself.

They also keep me sane!

Ronni,
Your description of the windows reminded me of a story dear Sam Levinson used to tell.
He said that the main thing his Mother wanted in their flat on the Lower East Side was a large table that the whole family could sit around. The family could eat their meals there and the children did their homework at the table.
There was a window in the dining room and one night while they were eating a burglar tried to jimmy the window open. The kids all started to scream and yell and Sam's Mother told them to all quiet down and be still. "I've never been able to get that window open,she said. Let HIM get it open, I'll give him a dollar."

My mom used to say "you always make money when you clean." And always kept whatever she found. Now whenever I find money while cleaning stuff I smile and think of her. And for me it is "pennies from heaven", as they say.

Hi Ronni! I hope all is well. I appreciated your windows story as I replaced all the windows in my previous home. Why? It saved me over $15,000.00. Crazy huh. I wish you all the best in Maine! - JohnnyO
http://fatherhoodmatters.blogspot.com

I actually want to do your laundry!