Home About Archive Contact
Previous month:
May 2007
Next month:
July 2007

The Courage to Create Universal Healthcare

If it were up to me, we would not begin presidential campaigns until about six weeks before election day.

But since it doesn’t work that way here and the U.S. has been in full campaign mode since the morning after the 2006 mid-term election, wouldn’t you think by now that anyone who has thrown his hat into the presidential ring would have a plan to address the number one domestic issue in the land?

You may think Hillary Clinton has a plan and you would be right to expect her to have one by now given her past experience and penchant for dropping the reference at every speech. But all she has done is release a tepid proposal to reduce healthcare costs without any mention of how to cover the 47 million uninsured in the U.S.

Neither Edwards’s and Obama’s healthcare plans call for universal coverage - single-payer systems. Both would allow people to choose between private insurance and Medicare-type plans to be offered by the government. Plus, Obama would not allow private insurers to deny coverage or charge higher premiums based on health history.

But unlike Edwards’s plan, Obama’s does not mandate coverage for adults which would leave the cost of care for the uninsured to be borne by others – you and me.

Both plans are more complex than expressed here, but complexity does not equal boldness. They both try to take credit for inching toward a single-payer system by allowing us to assume that since government health programs have a lower overhead, private plans would be forced to cut costs to compete thereby making the healthcare system more cost-efficient. But cut costs how, is the unanswered question.

In the end, both men lack courage to break the stranglehold the corporatocracy has on healthcare in the U.S. by openly endorsing a switch to universal coverage as soon as it can be implemented.

What these two men tell us about themselves in their half-baked, half-private plans is that they are timid, too much politics-as-usual kind of people to fix America’s broken healthcare system. Two men who, as senator and former senator, have no stake in fixing healthcare for the rest of us because both have the best health coverage in the country guaranteed for life by the federal government.

Because people 65 and older have Medicare, which works pretty well, perhaps some elders haven’t noticed that American healthcare is in crisis. One-sixth of all Americans are without health coverage. Millions of children go without basic checkups and dental care. Every day, people die because hospitals can’t afford to treat them.

For decades, we have believed U.S. healthcare is the best in the world; the truth is that by every standard benchmark, it is one of the worst in the industrialized world.

Writing last Sunday in the Washington Post, columnist David Broder suggested that prevention along with better management of chronic illness and disease is the answer to improving Americans' health and reducing healthcare costs in the U.S. That would help, but it is not, as he implies, a substitute for universal coverage.

What we need, to stare down the people who don’t want health coverage for everyone (corporations), is a man or woman running for president who has old-fashioned, true-blue, American courage.

And it will take extraordinary courage because any politician who promises to push through universal coverage will get no campaign contributions from the billion-dollar pharmaceutical industry, and there will be plenty of vicious “swiftboat” attacks from the pharmas and the rest of the healthcare industry.

Is there any politician out there, do you think, with that kind of courage? And who has a prayer of being elected?

[At The Elder Storytelling Place today, Joy Des Jardins writes of the trials and tribulations of Decorating with Dave.]

In the Winter of Our Lives

At his Ageless Marketing blog, David Wolfe is continuing his series on Carl Jung’s seven tasks of aging. He relates these tasks to marketing, but even if that is not your interest, there is much to be gained from David’s insights.

In discussing the third task – defining life realistically – David refers to the work of developmental psychologist Dan McAdams who divides life into four seasons of approximately 20 years each. Here, as David explains it, is what he says of winter:

“In winter, the primary developmental objective is to develop a sense of oneness with all and reconcile the sweet and the bitter in life. The main life focus is reconciliation – finding harmony and peace with ourselves, others and life in general.

“Winter’s mythic theme is irony, reflecting a persistent anticipation that the unexpected is always around the corner – though not necessarily in a negative sense. In fact, the unexpected often delights the older person as much as it does a child. Irony is particularly therapeutic in how it helps us cope with what we can’t change. And, it often provides us with a certain comedic twist to ease the burdens of old age.”

One of my mother’s favorite sayings was, “Too young we are old, too old we are wise.” For me, the greatest irony of all is that I suspect by the time I have a reasonably good grasp of how to live life well, it will be time to go.

[At The Elder Storytelling Place today, TravelinOma writes about finally, in age, growing up and into one's self in a story titled Free To Be Me.]

Last week, an old friend was up from New York City. A first visit to Maine requires some sightseeing, so we went south from Portland toward Kennebunkport and environs one day and north toward Boothbay Harbor on another. 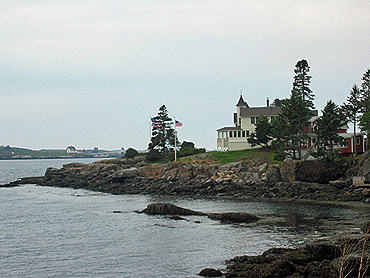 I had been told by several people that a summer can’t-miss is the lobster roll – “the best in Maine” – in Wiscasset at Red’s Eats. 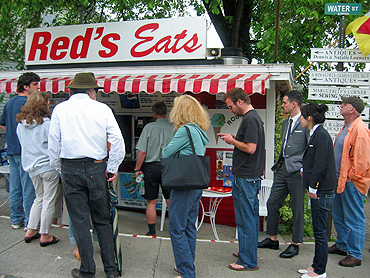 Waiting on line, we entertained ourselves wondering if these two young men – in their late 20s, maybe 30 – identically dressed in tight suits with short jackets and way too short pants were members of a cult or following a cool, new fashion trend we old folks hadn’t noticed yet. 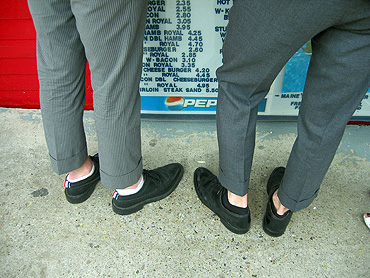 The lobster roll was worth every moment of the 30-minute wait – sweet, succulent lobster in a roll toasted just right with hot melted butter on the side – a perfect midday meal in Maine. 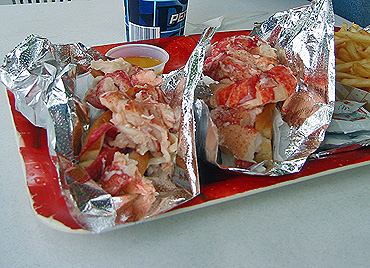 Last week, Estelle asked about Ollie the cat. He appears to be happy in his new Maine home and is almost friendly with visitors now instead of hiding under a bed while they are here. 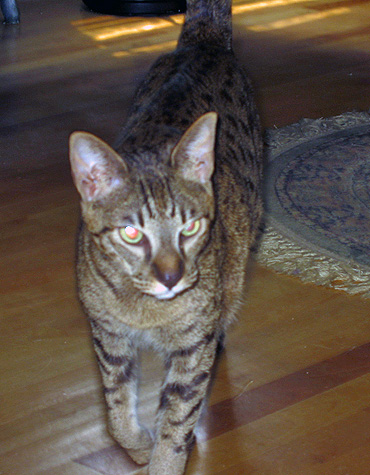 Both Ollie and I like to watch the seagulls soar outside our windows and hang out on lawns, although I suspect Ollie has different designs on them than enjoying their beauty. But these are big, fat seagulls nearly the size of Ollie and Ollie hasn’t a chance of ever catching one. [At The Elder Storytelling Place today, Ronni Prior writes about the misunderstandings that can occur at Midnight at Walmart.]

The Courage to Grow Old (2)

[EDITORIAL NOTE: It has been a busy week and I'm behind in blogging. Here is a piece from February 2006 you may enjoy again. And please do stop by The Elder Storytelling Place today where Colleen Redman writes about a later life ceremony in From First Holy Communion to Community Cloning.]

If we live long enough, there will be loss. You can count on it. At the least, muscles will weaken, we will tire more quickly, and memory may become an issue.

amba at ambivablog recently reminded me of this:

“You know anyone who doesn't [live with limitations]? For starters, that's all of us who are simply growing older and learning to live with sore knees and backs, dimming or blurring eyesight, fogged-in memory, and more. (One of the ways I knew I was middle-aged was when I stopped seeing the very old person creeping along in front of me in the supermarket as a maddening obstacle and started seeing him or her as a hero.)”

Barring accident or disease, these debilities sneak up on us gradually. One day, you wait for the next one rather than run for the bus. Another day, you think better of buying a half gallon of cider because your other purchases already weigh too much to carry easily. And when tearing through all the weekly housecleaning on Saturday morning comes to require a nap afterwards, you devise a schedule to spread it out over seven days. Dr. William Thomas speaks of this slowing down in his book What are Old People For?:

“Old age may be a time of loss and decline, but it is not only that. There is a countervailing and equally significant increase in the power of adaptation. The development of this capability is one of the most important and least acknowledged virtues of aging…

“While it is true that muscles weaken in late life, it is also true that older people are less likely to report symptoms of depression than younger people. Hair may turn white, get thin, and fall out, but when surveyed, older people often report an enhanced sense of well-being…

“These seeming paradoxes are actually the fruits of adaptation. It grows in tandem with and is nourished by the decline in physiological function.”

Adaptation, and also courage - the quiet kind that elders go about every day without acknowledgement from the culture or even, Dr. Thomas notwithstanding, the medical community. There are no medals, no cheers for navigating around the shoals of declining capability, but there ought to be because as the actor Bette Davis noted wisely, “Old age ain’t for sissies.”

amba links to a remarkable blog post by Anne Streiber who has been adapting to the residual effects of a ruptured brain aneurysm she suffered in 2004. Take her wish for everyone and hold it near as you make the adaptations required for living a rich and successful old age:

“Now I know that fearlessness is something we all need, because living even an ordinary life takes courage.

“May you all be brave in the face of your particular adversity, whatever it is.”