Crabby Old Lady’s post last Friday, Facebook = Elder Hatebook, has drawn quite a reaction here on TGB and around the web. Many are as appalled as Crabby, but a surprising number of people dismiss the Facebook anti-elder postings as “hyperbole”, just kids rebelling, in one case “a tempest in a teapot” and in another that Crabby’s post was “sensationalism.”

In November 2006, comedian Michael Richards, performing at the Laugh Factory in West Hollywood, used the N word against some black audience hecklers. Caught on phone video and posted to YouTube, the incident killed Richards’s career. Would someone please tell Crabby Old Lady why the same kind of speech against elders should be overlooked as childish rebellion?

Children, teenagers and young adults are not stupid. Their minds are like sponges absorbing lessons from every corner of their lives. It is our - adults' - responsibility to teach them well, and to allow hate speech aimed at any group without calling them out is is a lesson to them of our acceptance. As any adult knows, it is astonishingly hard in adulthood to unlearn bad habits and attitudes picked up in childhood.

Some who responded have suggested that the tiny percentage of hate messages on Facebook compared to the humongous number of posts from 30 million members make them unimportant. Really? Crabby asks you to consider what you would do if posters were tacked to telephone poles calling for violence against elders (or blacks or women or teenagers or anyone) appeared across town in a neighborhood you don’t visit. Would you, the local government and other residents ignore them? Facebook is not different.

Some believe ageism is not on a par with racism and sexism because young people too will be old one day. Crabby disagrees – adamantly. It is because young people will grow old that we must protest whenever we find ageism and hate speech against elders so that when they reach our age.

As all advertisers know, repetition succeeds. The more an idea is repeated, the more acceptable it becomes. If we don’t combat ageism now, it will still be here when those young people are our age and it is we adults who will have allowed it to continue. Those kids on Facebook (are we certain they are kids?) may be acting like nasty little trolls today, but they can change and a swift kick in their virtual behinds by removing their posts and/or banning them from Facebook for a period of time might be a step toward that change.

Although in primitive societies, elders were valued for their knowledge, experience and institutional memory, ageism is not new. In the early 20th century, it was common enough to produce this cartoon from the Independent on 28 August 1913: 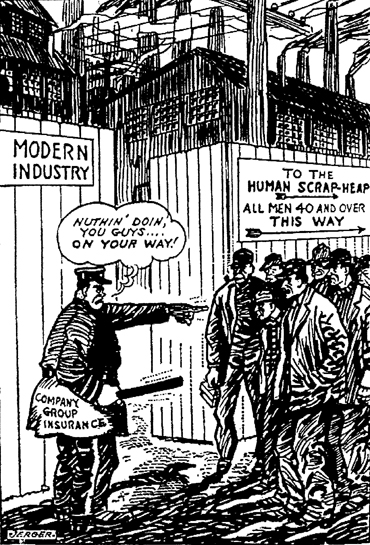 Like ageism, neither racism nor sexism was new in the 1960s when a good deal of progress that continues today was made toward changing those attitudes. Until people believe that ageism is as destructive to individuals and the common good as other prejudices, it will continue to harm not only today’s elders, but future elders too:

“Most older persons report that they have experienced ageism, and although polls do not reveal the frank personal expressions of prejudice by the population at large [such as on Facebook, ed.], ageism remains embedded within the nation’s institutions with de facto discrimination in the workplace, health care, language, appropriate care of older persons in long-term care institutions, abusive language such as ‘crock,’ ‘gaffer,’ ‘old biddy,’ and imagery revealed in ugly, distorted, angry, and negative cartoons and drawings.

“In addition, ageism is apparent in direct personal responses toward older persons – insensitivity and impatience are not uncommon. Especially painful is the extent of various forms of abuse – physical, emotional, financial, even sexual.”

Go read the entire report which was produced by the International Longevity Center, directed by Robert N. Butler, MD of Mt. Sinai Medical Center in New York – the man who coined the term ageism in 1968. The report is thorough, reasoned, balanced and for those who like such references, crammed with footnotes of sources.

A number of readers – in comments or on their blogs – say that canceling Facebook membership is not the way to go, that remaining there and fighting the hate speech is more valuable. Crabby doesn’t disagree and considered that herself. But Crabby Old Lady does not find Facebook useful for her in general and there is something to be said, in protesting, for opting out of organizations that condone prejudice. Crabby has no idea which avenue is correct or produces better results so why not try them all.

Ian Bertram of Panchromatica, who is one of Crabby’s longest-standing blog buddies, took Crabby to task for using the age of Facebook’s founder in noting that he is the media’s most recent internet darling. That was a valid journalistic decision which Crabby stands by. And to others who suggest Crabby was attacking all young people in her objection to Facebook anti-elder groups, go back and read the post. Crabby did not do that nor would she ever do so.

Adrian, who commented on ambivablog’s story about Facebook hate groups, did a good deal more research on Facebook than Crabby did, finding a host of other hate groups – against women, men, fat people, babies, whites, blacks, liberals, Republicans, a variety of the world’s gods and – The Beatles.

If Adrian’s long list and that last item appear to make the various groups’ laughable, Crabby Old Lady differs; it is just proof that repetition breeds familiarity which leads to easy acceptance of discrimination. None of it is tolerable.

But Crabby can’t save the entire world and so she will continue to beat her drum about what getting old is really like and, when it hits her radar, ageism.

“It is critical that we begin to transform the culture and experience of aging in America. It is a matter of human and civil rights.”

[There is a new contributor, Grannymar, at The Elder Storytelling Plact today with a story about wearing pants - very fancy pants - long before that was an acceptable Style for women.]

I agree with the problem of ageism in our society. Facebook is yet another medium for the problem. But I think older adults have much to gain by using Facebook. Boycotting them would only harm and not help the situation. To elaborate my point, I just happen to have posted 5 reasons why elders should use Facebook on Elders Tribune.

The people who are blowing this off are probably the same ones who, when their own kids committed an impropriety, said, "They're just kids." My reaction to that was and is: No, they are not "just kids"; they are future adults and it behooves us as adults to quash inappropriate behavior. Blowing off bad behavior is easier than enforcing rules and I think a lot of parents haven't wanted to do their job. When I was raising my kids, I saw this mentality a lot. I have also seen the result of it. Nastiness on facebook is just the tip of the iceberg.

Paul at Elders Tribune, thanks for some real investigative work on this, especially:
http://www.elderstribune.com/editorial/2007/jul/30/inside-elder-hate-groups-facebook-day-2-and-conclusion

Ronni, thank you for being one of those who stand up and holler out loud when they see something wrong. People like you are doing something of great value for all of us.

After reading your article..I was invited numerous times to join Facebook, but I declined. I did let everyone know the reasons why. I will not tolerate abuse of the elderly in any shape or form.

I'm your age, and I spend a lot of time on Facebook. Always with people a lot younger than I am who aren't ageist. I ignore the others. It's very much like when I owned my business and some men were anti-woman. I ignored that, too. There's an old yogic truth: what you look upon grows. I choose not to look upon ageism. But I do hope we get a chance to talk f2f at Gnomedex.

"to allow hate speech aimed at any group without calling them out is is a lesson to them of our acceptance."

Hear, hear Francine -
The hate speech we allow or 'ignore' means we are just as guilty because our silence is taken as benign acceptance. I don't buy into "they are just kids", odd how "kids" grow into adults.

Hitler, Dahmer, Mao were all "kids" at some point. Either we take a stand or we accept whatever comes without a word.

It doesn't just "go away", it never has and never will.

For those of you who choose to hide your head in the sand and pretend it doesn't exist, please don't look to the rest of us who lived through the violence, police dogs, Kent State shootings, Watts riots, segregation beatings of the 1960's to do it again on your behalf.

Either take a stand or continue to be victims - the rest of us have picked our battle to demand, at the very least, we be treated with simple, human dignity at any age.

I heartily agree that we should take a stand wherever ageism, or any other hate group, rears its ugly head. To remain silent is to indicate acceptance. Remember the story ending "there was no one left to speak for me." and speak out.

Attitudes are contagious - in a friendly town the clerks all smile and wish you good morning; in an unfriendly one, they act like they are doing you a favor when they wait on you. If you live in either one long enough, you find yourself acting the same way.

In many ways primitive societies are more cultured than developed ones by revering the wisdom of age. Too bad ours can't adopt that attitude. I think it's up to the elders to change minds.

P. S. A little humor here. I just read an e-mail titled "Profound Thinking". There was one quip that I found appropriate to this subject. It is: There's nothing wrong with teenagers that thirty years won't fix.

"When I was 16, I knew that my parents knew nothing. By the time I turned 21, I was astonished to discover how much they’d learned in the last five years." [paraphrased, badly]