When I was a kid growing up in Portland, Oregon, a common family excursion was a drive up the Columbia River Gorge to Multnomah Falls. Even as frequently as we made the drive, it never was ordinary and so, in the week following the Gnomedex conference when I visited my brother in Oregon, it was a given that he and I would take that daytrip together.

The Gorge is a canyon through which the mighty Columbia River flows into the Pacific. There is a modern highway, I-84, but that is not the way to go. The parallel, old Columbia River Highway winds through forests of incomparable beauty with stretches of dappled sunlight like this one: 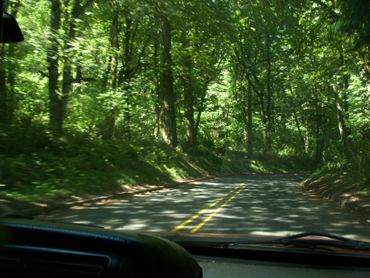 Along the way, many streams flow into the Columbia leaving an opportunity for stone bridges like this one, some of which, under the tree canopy, are covered in moss year round. 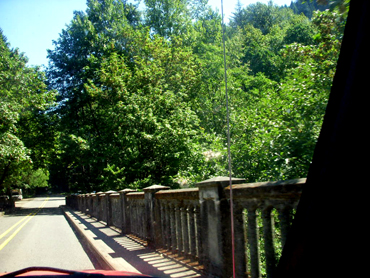 The origin of some of those streams is a waterfall of which there are twenty or more in the Gorge. This is either Bridal Veil Falls or maybe Horsetail Falls. I lost track of which is which. 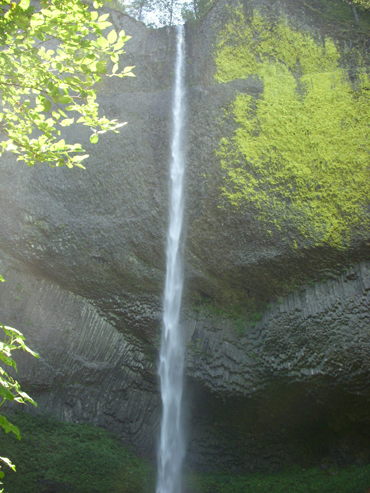 Here is another stone bridge from the wooded side facing toward the narrow, two-lane highway.

The destination when driving the Columbia River Highway is Multnomah Falls – the most magnificent of them all. There is a stone lodge which houses a restaurant where my brother Paul and I had lunch that day on the patio that afforded a glimpse of part of the Falls through a break in the trees above the table umbrella. After lunch on our walk toward the Falls, I couldn’t resist of shot of this stone outcropping with so many shades of green. 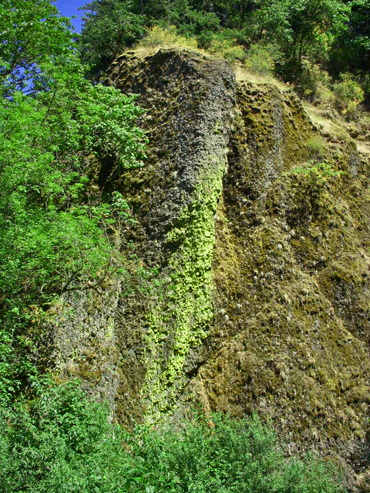 And here is Multnomah Falls, a total of 620 feet through two drops. You could say that it is just a waterfall - spectacular though it is. But it is a connection to my childhood and takes on additional importance to me for that reason. 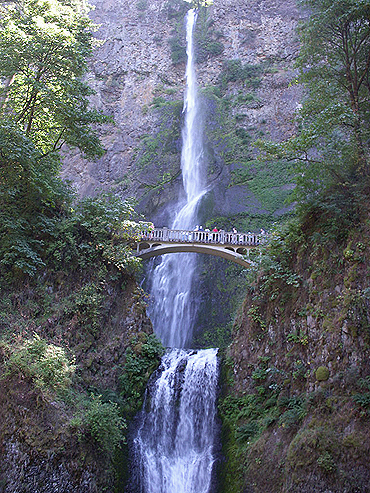 There is much more I wish I'd written in my post yesterday about Gnomedex. My excuse is an airplane bug that has laid me low and my brain is operating at about half speed. There will be more another day.

[At The Elder Storytelling Place today, Randy Clark tells of My Gypsy Childhood with a satisfying surprise at the end.]

Great photos. The weather was certainly better than it is here in France. We've had a rotten summer.
Hope you're feeling better!

Ronni, if you ever decide to try another business venture you could become a professional photographer. I love your photos and think the quality is so good you could enlarge them and sell them. I especially loved the last one of Multnoma Falls. I could almost hear the rushing water. (Deaf, though I am). Thanks for sharing.

Beautiful photos -- what a lovely place it is! Hope you and your brother are having a great time.

Beautiful photos and I also have loved the Gorge. I grew up in its mouth but on the Washington side. I have always enjoyed driving up and going as far as Eastern Oregon, watching the terrain change from the one I live with most to the dry, juniper covered hills of The Dalles. It's a magical place and I'm so glad it got protected to preserve that natural beauty as much as possible

Welcome home, so sorry about the bug, but thanks for the beautiful views.

Ronni,
My husband,Roy, always talked about the "MIGHTY COLUMBIA" and always wanted to visit there, so a few years ago I decided to make that trip to Oregon happen.
We live in Pennsylvania so it was quite a trip but so worth it.
As a surprise to him,I booked us a room at the Hood River Inn and requested one that opened onto the river.
It was a motor trip with no reservations made, so when we had visited all of those wonderful falls
you so beautifully photographed, I suggested we stop at the next Inn or motel we came to.
Well, of course I steered him to the Hood River Inn and when the young fellow took our bags to the room he opened the curtains of a sliding glass door and there was the Mighty Columbia flowing right past our room. There was a gorgeous green lawn and chairs to just sit on and stare at the beautiful river.
What a terrific surprise that was for him. He still talks about it and we have returned since and retraced those steps. Such a happy memory. Thanks for jogging it!!!!!

What a treat for you and your brother to share such beauty and also to retrace a part of your childhoods.

The pictures are awesome.

Spectacular. Even more beautiful to have revisited with your brother some of those great memories of your childhood. Perhaps you can savor them while you recover from that bug, and bounce back even quicker. :-)

No words to describe such beauty. Absolutely breathtaking - even as a photo!

I can almost hear the falls...

Very good photos of a lush and lovely area of the country, Ronni! I love the last one.

What a beautiful part of the country!! And to go back and visit with Paul - how very special that was!!

Read Joard's detailed post about Gnomedex, now
I'm looking forward to hearing more about it from you. That photo you put up showing the stairs to get into the building were unbelievable - I would think that even young people would have a hard time with them.

Hope you have kicked that bug out the door and are feeling much better.

Ronni, just found you today by "accident" as I was researching Friends of Jung in Maine. Your blog came up. It's a first for me to read a blog and I'm fascinated by this journey. Thanks for being so special. Maine is my vacation spot and who knows someday I might retire there too. Linda

The last photo looks like the water is weaving through hoops. Breathtaking. I "met" your bro in your awesome series on your mother's last gift, and I was hoping to hear more about him. I have been wondering since you posted that you'd be seeing him after Gnomedex. You feel like an old friend, a sister, someone about whom I have grown to care about deeply, and hence wanting to know more of the so-called little things, the details.

Wonderful to share childhood memories with your brother. Enjoyed a similar experience earlier this year with my own brother, but, in conversational recall only due to his health issues. Unlike you, we weren't in the area we shared as children.
Cherish the times when family can be together.

Have seen parts of Oregon, but clearly missed this spectacular drive. Your photos make the thought of such a trip attractive for some time in the future, to add to an already lengthy list.

My grandparents on both sides made it a tradition to go mortoring and visit Multnomah Falls, and my parents took us up regularly.

Now I live in Sausalito, yet still take that lovely jaunt with my family members and visitors form around the worl
dd when we are all in the Portland area.
I loved looking at your wonderful photos. So familiar. My father and many of my friends have taken shots from those places
Thank you for a great break in my day. I will take out my album and see the photos of the lodge at Mt. Hood - both before and after it was fixed up, retaining its WPA look.
- Kare