Oliver and the Tiny Intruder

It’s been a long time since there has been an Oliver the cat story here – more than nine months in fact. Time to catch up.

While I was on the west coast earlier this month, Ollie celebrated his third birthday. A few months ago, thinking he might need a companion of his own ilk, I brought home a year-old shelter cat. Disaster ensued.

The new cat tore up a rug, terrorized Ollie and passed on an unpleasant respiratory disease – all within the space of 24 hours. The cat was returned to the shelter.

It has come to pass in recent weeks, that my downstairs neighbor, singer/songwriter Graham Isaacson, has acquired a black kitten named Salem, after her home town in Massachusetts.

A few days ago, there was a yowling outside my apartment door. Investigation resulted in the discovery of said small, black kitten who did not wait for an invitation to come in. 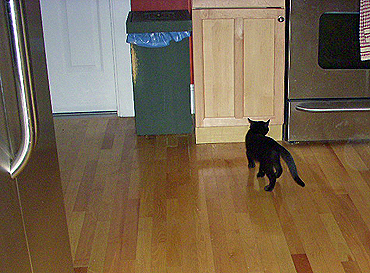 To Ollie’s dismay, as he followed her at a few cat paces, she immediately made herself at home checking out each room, then ducking under the bed ready for a game of hide-and-seek. 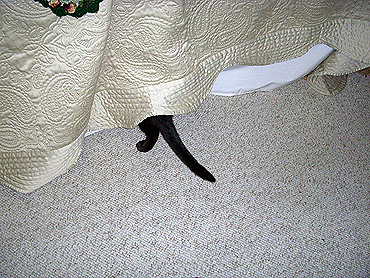 Ollie was not going to be trapped under a bed with this snoopy, little stranger, but he wasn’t going to let her escape without his notice either. 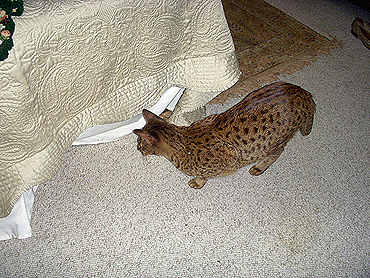 Salem, not yet old enough to have discovered her dignity, gave in and when she emerged, the first scuffle erupted – bopping each others’ heads - followed by galloping from one end of the house to other - first Salem chasing Ollie and then back again with Ollie in pursuit. Up and over furniture, around and under tables, crashing into a wall or two until Salem raced toward the bathroom. 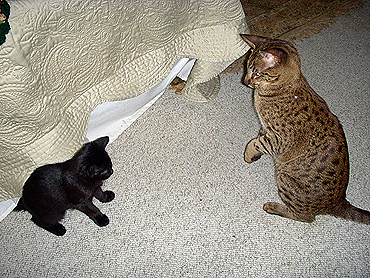 Apparently, cat culture dictates that no attack can take place during a pee break for which the little hussy hopped into Ollie’s litter box as though she’d been using it all her short life. Having relieved herself, she immediately jumped into the bathtub where Ollie likes to keep his best toys. He didn’t pursue her; he waited patiently for her next move. 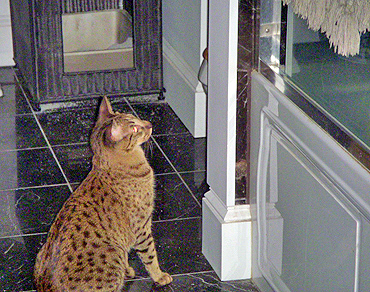 Salem leapt from the tub, ran several laps around the house until Ollie trapped her in the library. For a moment, they rested – warily… 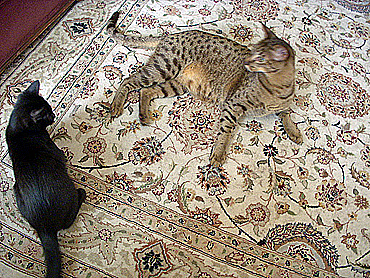 …until they both attacked at once, tussled one on top of the other with a few yelps and howls, but no blood was let. 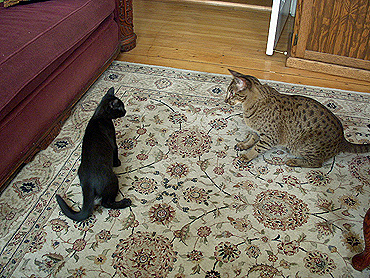 Salem extricated herself from Ollie’s half-Nelson and calmly sauntered out of the room to Ollie’s utter amazement and disappointment - he was just starting to have fun - Salem was finished with their romp. 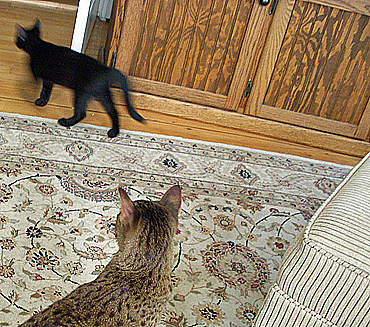 In time, I think, Salem and Ollie would be friends. But I can’t talk Graham out his new kitten.

[At The Elder Storytelling Place today Eva Craw, as told to her daughter Candace Craw-Goldman, recalls the harrowing tale - The First Time I Ever Rode a Horse.]

I loved this little kitty ditty. I especially liked your exceptional photojournalism that accompanied it.

Ollie is such a strikingly beautiful creature.
Maybe Salem can come over and play more often.

I love Oliver! I once had a cat who was named Olivia and when she had kittens I named one of the boys Oliver.

The pictures accompanying your story are wonderful and your Oliver is gorgeous.

Thanks for the fun of watching these two kitties decide whether or not they are going to be friends.
I think they are!!!!!

Ollie is so cool! He reminds me of Geoffrey -- the cat my ex adopted as newlyweds.

I like stories about the antics animals experience establishing friend or foe. Humans can be almost as funny sometimes. Great photos!

I love seeing the pictures of Ollie and Salem. Perhaps the two of them can just have regular "play dates".

The kitties match the furnishings, proving that all belong together.

I really enjoyed this post, almost as much as I adore cats. My last two died last year at age 16; decided not to replace them so as to be free to pick and go more or less on whim without worrying about family or pets left behind. This gave me a chance to enjoy cat antics again. Ollie is so adorable; what a beautiful coat he has--looks like a designer made it special.