UPDATE: Tee hee. Could it be a coincidence that this piece of spam showed up in my inbox about two hours after I posted today's entry? Dunkin' Donuts has never spammed me before today. 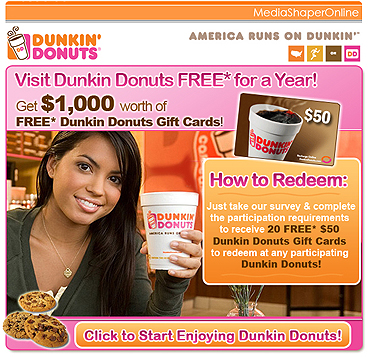 Remember Seinfeld's soup nazi? Now we have the nutrition nazis.

The headline was irresistible: “Seniors Balk at Ban on Free Doughnuts”. The story was compelling too. Seven aging demonstrators marched outside a senior center wearing sandwich boards that proclaimed “Give Us Our Just Desserts” and “They’re Carbs, Not Contraband.”

Clever slogans, proving that elders are not as dim as stereotypes insist.

“At issue is a decision to refuse free doughnuts, pies and breads that were being donated to senior centers around Putnam County, north of New York City. Officials were concerned that the county was setting a bad nutritional precedent by providing mounds of doughnuts and other sweets to seniors.”

Opinions on the doughnuts among regulars at the center is mixed. Some non-picketers are glad to see them go. Administrators quoted from several senior centers around the country are mostly anti-doughnut too.

“The lunches have to supply one-third of the federal minimum daily requirements in such categories as calories, protein, vitamin C and vitamin A, said Chris Miller, spokesman for the [New York City Department for the Aging].”

Ever since the studies on obesity in the United States were released earlier this year, food manufacturers, restaurants and other meal providers have rushed to improve the nutrition of their products and there are few who can object. But there is cause to be concerned about the coercive quality of this new nutrition campaign. Morality cannot be legislated and I doubt food choices can be either.

In any case, wouldn’t it be more productive to remove junk food from schools than senior centers? As C. Michael Sibilia, who visits a senior center, now without doughnuts, in Putnam County said, "I'm 86, not 8."

[At The Elder Storytelling Place today, Kay Dennison tells a story about the odd things that can happen when there is a new baby in the house in How My Sister Got Her Freckles.]

Oh my God! The food police have gone too far!!!!!!! I think I'm old enough to decide what I can eat!

Ah...but....To me, it is ageist to ask "...wouldn’t it be more productive to remove junk food from schools than senior centers?"

Aside from the ageism issue, I think that junk food should be removed from both venues. Doing so encourages (not forces) one toward healthful practices. I offer someone a free meal and you think they have the right to insist that I offer them cash? Mom always taught me to accept or reject what was offered--not to dictate what my benefactor should offer me.

I'm with Cop Car on this. No one is stopping anyone from going out and buying doughnuts and eating them. But if I were working in a senior center, I would feel responsible for creating a safe and healthy environment for my clients, not offering them things that would be bad for their health.

It's not so much acting like a mommy as acting like a good friend. One of the hardest parts of eating well is when your friends entice you to eat things that you know you should not. There is a lot of pressure to just go with the flow and do what your friends are doing.

One of my friends works at a company that provides free doughnuts in the morning and free pizza every Friday and other sorts of unhealthy treats. It has really made it hard for him to stick to his diet, in spite of the fact that he has Type II diabetes and knows this stuff is bad for him.

It's great to talk about personal choice, but people are invariably influenced by their environment, and I think we do everyone a service by trying to make that environment a healthy one.

Oh joy! I love the image of people sticking up for themselves.

While it would be nice if we could eat better quality, for those of us who want to be smaller sized, the first project is to move more and eat less. Period. I know; I flunk this frequently.

Honestly, I see both sides of it. But it is free food and I do think the center has a right to say "no, we won't host free food of this type" - because it's not the sort of thing they want to encourage. Now, if one of the elders goes down, buys OR GETS FOR FREE a dozen donuts, and brings them in - unless they have rules about outside food, they've no right to comment on that.

At my workplace, the admin assistant brings in a treat every Friday. And sometimes it is donuts or coffee cake. And I should not have these things. And it is VERY HARD not to grab one and eat it anyway, because the smell and the sight of it is very tempting, and everyone else is chowing down. She has a right to, of course, so I just try to do my best; but lately she has mostly switched to bagels and, while less thrilling for some people, I appreciate it. I'm not being tempted by treats I can't have, when I'm in on Fridays.

The sad thing about free donations is, of course, you can't necessarily get the people donating them to substitute, as was done at my workplace. They may be all or nothing.

And too, that center can make healthy sandwiches from the breads? Pies often have fruit. That counts. Personally, I couldn't have made it through the baseball season on so little sleep if my body hadn't been jumpstarted with a donut or two. For me, they've been lifesavers. I bet those seniors like them just as much.

Tends to prove that 'seniors' are not grown-ups! They don't have a right to choose their own food. I always get upset when I see age categorised as children, adults, seniors.
Seniors or rather elders ARE grown-ups, therefore adults and they are well able to choose what they like and what they want.

Well, I don't think suggesting efforts would be put to better use removing junk food from schools is ageist, but then I didn't explain what I mean:

It is our job as adults to teach children who have no other way of learning. Among the lessons children need is how to eat nutritionally.

Adults know how to eat and if they choose to have a doughnut, it's their choice. And those who should not for health reasons can say no, thank you.

As Claude says, it's the nannying of elders that is the concern.

As for me, I'm going off to the kitchen and have a doughnut. Please don't anyone report me to the food police.

It must be the season for doughnuts. I just made a batch.

I'd like to see anybody try to tell me what to eat when I get to be an elder. It is patronising in the extreme!!

I can decide whether or not to eat a donut. The food police can step aside. :-)

Donuts are comfort foods that a lot of people consume including Seniors. I USE TO like donuts very much sometimes eating a Bakers Dozen all by myself (not recently). I presently don't eat any dounuts. However; now we get much better nutritional knowledge about foods in general and especially about their health benefits. I'm sure a tasty Tim Horton's, Dunkin OR Krispy Kreme is fine from time to time; but if we sit down EVERYDAY in these public places and/or Senior Centers and just wolf down a pile of donuts/cakes, etc. washed down with Extra sweet RICH coffees, THEN I believe we create REAL health problems for ourselves.

Hillarous. What else are health officials going to ban because its unhealthy. What happened to our country?

Anyone care to compare this to the current ban on handing out free cigarettes to GIs. This was common practice, when I was a kid. I should think that GIs qualify as adults; but, unless I'm having a senior moment, cigarettes no longer are provided to GIs "free".