Home About Archive Contact
Elders and the Changing Blogosphere – Part 2
What Have You Stopped Doing in Your Old Age?

A Home in Portland, Maine

[EDITORIAL NOTE: A new feature has been added to Time Goes By: Where Elders Blog. Get a peek at the places people blog and do join us by sending a photo of your blog space - the more photos, the more fun for everyone. The announcement/instructions are here.]

This Photo Biography/Timeline has been neglected for too long. In fact, I haven’t posted new pictures in 18 months which has been an eventful period for me, having moving from Greenwich Village to Portland, Maine and all. 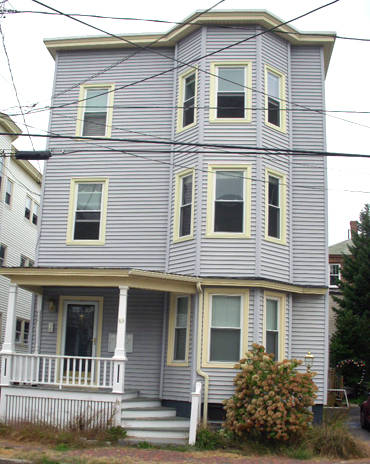 [8 June 2006] That's the day I closed on my new home and that’s my apartment on the second floor. I first noticed these New England-style “triple deckers” – sometimes called a “three-deckers” – on train trips to Portland from New York and back when I was looking for my new home; they are ubiquitous from Rhode Island on north.

Triple-deckers scream “working class” and “immigrant” and so they were when most were built in the early years of the 20th century. Mine was built in 1899. These days they are more likely to be renovated and sold as condominiums (shouldn’t the plural be condominia?) for middle class families.

Triple deckers are justly famous in architectural circles. The apartments are large, usually have decks or porches - sometimes both front and back - and because they are set on lots and not flush against one another as brick rowhouses generally are, there is light and air on all four sides.

Wikipedia has an entry on triple-deckers. An architectural blog calls them “da bomb.” There is even a long-running play about the residents of a triple-decker building.

Readers from other parts of the U.S. would be shocked at how small homes are in Manhattan, even many that cost millions of dollars. After nearly 40 years in cramped, New York City apartments, I feel like I have finally become a grownup having, now, so much space to rattle around in, including – oh, such grandeur! – a guest bedroom.

[At The Elder Storytelling Place today, kenju is having some fun with elder stereotypes in Mothballs and Throwrugs - the Mark of a Retiree?]

I love your home, Ronni! I love old buildings! My current home is the first floor of an old house that has been duplexed. My former home was a huge flat in a nearly 100 year old apartment building. Both have character that the little boxes they call senior housing don't have!

And, Oh, the stories your house could
tell, Ronni, if only walls could talk about the many families who have lived there in that beautiful old place.

I lived in one when I was a girl in Lewiston, ME. My first home on my own. Not anywhere near as elegant as yours is now, however, and only one bedroom.

They were built for millworkers in mills that no longer exist. I wonder who lives in them now?

I love the way it looks, Ronni, and I would be sure to love the inside since it is old!

We bought an 1805 cape painted barn red in Portland on Stevens Avenue. Coming from a co-op Brooklyn, having a 4 bedroom house with a garage, driveway parking for two and a large backyard is an affordable luxury compared to the prices in NYC.

Hi Ronni, I just read your entire timeline--Gawd, that was fun! (and sad, and happy...and sad and happy...just like life is!) I think my favorite line was: "chill lady, you'll get there" ..! haha

Will you add a current photos to the Timeline?

My dear Ronni, I don’t know what took me so long, but I just discovered the “Timeline” today, and went through the whole thing—not without a few tears. I know how time consuming it is to put something like this together, but I wish you could find the energy to add just enough to it to continue your story to the present day.
Love, Margaret