Would you look at this. I bought these Brussels sprouts at the farmers market on Wednesday just because they were still on the stalk. They are weird-looking, like something that might grow on Mars or Qo'noS. 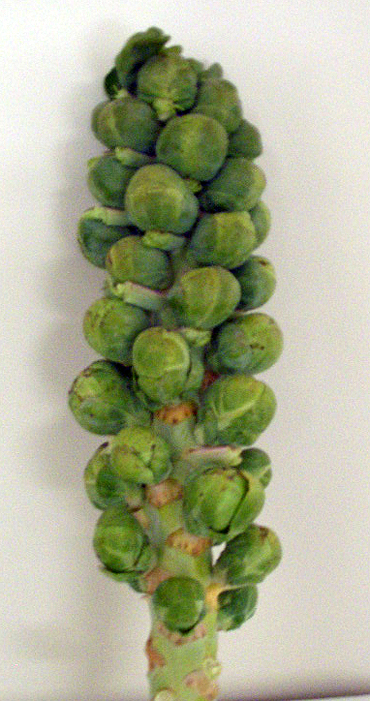 I never had any idea, until I spied them on a table among the beets, turnips, parsnips and carrots, how Brussels sprouts grow, and I don’t suppose I ever thought about it.

If asked, I might have said they grow like tiny, little cabbages out of the ground, but wouldn’t that be silly and way too backbreaking to harvest to be worth the effort for a farmer. So the question I have now is how did I get to be this old without knowing something as common as how Brussels sprouts grow?

And of course that leads me to wonder how many other odd and remarkable things I’ve never learned in six-and-a-half decades. I’m not talking something as intricate as – oh, say, organ transplants. Just ordinary stuff like Brussels sprouts that one ought to know, or would be cool to know.

[At The Elder Storytellng Place today and tomorrow, Parts XXI and XXII of the serial fairy tale, Chandra and Her Georg.]

I've always said I continue to learn something new every day and today this is it.
I love Brussels sprouts and eat them regularly...but have to admit, I had no clue they grew on a stalk.
So much to still learn! Now about those organ transplants.......

Of Brussels sprouts I thought I knew. Yet Qo'noS? Had to look up that one, and then remembered all the worlds I miss as a non-sci-fi fan. Another life. Next, I checked your spelling of the vegetable, and found my own decades of ignorance in calling them Brussel sprouts, clearly overlooking all the correct spellings... until this morning. What a day. And it is still early, and I've only just begun my lessons.

Thanks, Ronni! I needed a good chuckle this morning. Dee

But then there are all the things you know that a country living person would not. It's neat when we can cross over into someone else's domain and challenge ourselves to learn something new. I have had this theory that the brain only has so much room and use that as my reason for not investigating everything, but I know it has a lot more room than I use, and even when old, we can move into realms that are new to us. My father-in-law learned about computers in his 80s.

I have never liked Brussels sprouts...but didn't know the exact spelling. I do love cabbage! I recently learned that persimmons grow very high off the ground and not in great numbers. There is still a world of stuff I do not know.

That's not altogether a bad thing, Ronni. It gives us other things to think about for years to come!

My father would say, time and again, when he grew older, "The more I know, the more I know I don't know." And he was a very smart man. So there you go!

I lived to be 75 years old without knowing the source of pure vanilla.

"Vanilla planifolia
Do you know…
the link between orchids and vanilla?
The vanilla plant is a tropical vine, which can reach a length of over one hundred feet.

It belongs to one of the oldest and largest group of flowering plants – the orchids.

Of all the orchids, the vanilla family is the only one that produces an agriculturally valuable crop."

I had a bet with my son when he told me vanilla is derived from an orchid plant. He won.

As the daughter of the farmer's daughter I am ashamed -- sorta -- that I had no idea how brussel sprouts grew. They weren't planted in our garden. I don't like/eat them they smell yucky when cooking. I did, however, cook them when they were in season because ex-hubby and darling daughter love them.

Yum, brussel sprouts. Milder than cabbage. Even the grandkids love them steamed and basted with butter and a bit of brown sugar.

I've always lived in the country but I too have a few gaps. Want to know why juniper berries are so hard to find in the shops. Used to be as common an ingredient as pepper and salt in stews. And celery root -- guess it's time I found out what the heck that is.

And Ronni, even if you didn't know how brussel sprouts grow, I know for a certainty from reading all your insightful blogs, that you didn't fall off the rutabaga truck yesterday.

My husband had a business trip to China a few years ago. Walking the streets with all the vendors selling their goods he discovered fresh lychee’s. He knew I absolutely LOVE them, so that’s the surprise he brought home to me. (I didn’t know how they grew and had only eaten them from a can.)

There were a few fruits on each branch and then a few branches simply tied together by the vendor with a pretty pink ribbon.

He may as well have brought me the crown jewels, I was so thrilled! Imagine! FRESH lychees direct from the streets of CHINA!!! I’ll never forget that. Ever.

Now I just happened to know sprouts grew like that because my grandparents used to keep a vegetable garden and they always said you had to wait for a frost before they tasted their best.
On the other hand it was only yesterday that I learned - via Olive's blog - that stamps were invented in Britain and that's why British stamps don't have the name of the country on them. As you say, Ronni, there must be millions of everyday things we have yet to learn so life should never be boring.

Well, Ronni, it was only a few years ago having a look around a garden that I realized that green beans actually grew out of a flower!. I have always been a city girl, and never really curious about growing things. More of a consumer, I guess ;)
I find it wonderful that there is still so much to learn, so much that we don't know about!

Ronni,
Just found out that Plum Sauce doesn't come from plums...it comes from pumpkin.
And the best way to eat brussel sprouts is cut them in half and saute them in bacon fat. I know its not healthy..but darn good!

Ronnie that was great, while I had my four year old grandson this weekend I also heard while watching, one of the children programs, anything with seeds is considered a fruit not a vegetable. It has to have leaves to be a vegetable. Wish I could tell you the name of the show..I forgot..however, I was curious have you ever heard that before? It means a cucumber is a fruit among many other things.

How doth the little artichoke,
Grow eloquently so green,
And weave its petals in a spoke
Layer upon layer and in between.

How regally stands the long stem
And sweetly shakes its head,
We love to gently boil and serve them,
With a little butter and some bread!

So much to learn....so little time-Thanks, Ronni and gang.

You're welcome to my share of sprouts. In the meantime, if you are unclear about any further vegetable production, please feel free to write to me. You can be such a city girl sometimes! ;-)

Ronni, my daughter (39) had exactly the same Brussels sprout enlightenment last week when she, too, saw them at her farmer's market on their stalks. "Wow, I never knew they grew like that" she said.
"But you MUST have known," I protested. "I used to grow them, when you were a kid". Then we remembered that because there was no room in our own yard I grew the veggies in back of my sister's house, up the street. So I brought them home already picked. Barbara Kingsolver, in her recent book, Animal, Vegetable, Miracle tells how a magazine editor wanted to nix the part of an article where she'd referred to pineapples growing out of the ground. The editor knew that must be wrong because pineapples grow on trees.