In this regular Saturday feature you will find links to news items from the preceding week related to elders and aging, along with whatever else catches my fancy that I think you might like to know. Suggestions are welcome with, however, no promises of publication.

¶ Last year, 25-year-old Richard Stelmach noted that while he and most of the people using Facebook are somewhere near his age, in 40 years or so, what they will be writing and doing would be somewhat different. “I know this thought is a bit random,” he writes in the introduction to his Elder Facebook Page, “but I strangely find it interesting." Click on the image to read his vision of his future on Facebook. And please do cut him some slack – it’s funny. [Hat tip to my houseguest, Stan James of Wandering Stan.] 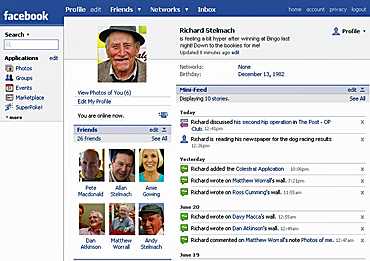 ¶ Several readers have sent emails recommending the new BigThink site that appears to think of itself as YouTube for – well, big thinkers. It’s still in beta but apparently the idea is that anyone can post videos expressing their bigthink ideas and last week, Chuck Nyren signed up. He hasn’t posted any idea videos yet, so here’s what showed up on his BigThink profile page. It seems a rather discouraging way to welcome new members. Check out Chuck’s brand new blog, Chuckhov’s Fun Blog.

¶ The video below has been viewed more than 6 million times on YouTube, so I may be way behind the curve, but it is still beautiful: 500 years of women’s portraits in western art. The morph video is by Philip Scott Johnson set to Bach's Sarabande from Suite for Solo Cello No. 1 in G Major. [Hat tip to John Brandt}

¶ Erica Jong makes a pretty good case about us – you and me – getting the president we deserve because we allow the media to turn a presidential election campaign into a high school popularity contest. Give it a read at Huffington Post.

¶ A year ago, when a college professor David Gould asked people age 50 and older to write letters to his college students, he wanted them “…to give insight on what they know now that they wish they had known when they were in their 20s.” The results were remarkable and some are now online at the Legacy Letter Project. The project continues and you too can participate.

The video is beautiful. There is another one of famous living women that morph into each other. It is making the e-mail rounds and can be found on You Tube.

Interesting that one of the people commenting on Richard's clever Facebook mock-up said it was "Cool but scary at the same time…"
I wondered whether the 'scary' part referred to the prospect of getting old or to the fact that Richard has assumed the banality quotient will remain high after forty years of social networking.
If the latter, then let's hope his forecast is wrong and that the older we get the more we shall be using this wonderful tool to engage in real, meaningful dialogue with others around the world. That is certainly true of Elderwomanspace, the network I started in November. Not only are the discussions on Elderwomanspace interesting and the banality quotient practically zero, but the site has already developed its own culture which scores high for friendliness, mutual respect and caring. (Perhaps we are all gentler with each other than we were in our youth.)
The experience of creating Elderwomanspace and watching it evolve over these past two months has already convinced me that social networking is destined to play an increasingly important role in elders' lives in the years to come, as computer literacy becomes more and more the norm with each cohort.
Mine was (by consensus among the several dozen women who formed its nucleus) a women-only site and will remain so. But as a psychologist by profession, I'd love to compare notes with people who have started mixed or men-only social networking sites for elders and see whether/how gender might perhaps affect the sites' dynamics and culture.

I'm facinated by the "letter" site, and as I read notes, I'm also interested in Ms. McCains comment about gender.

I found myself in violent agreement with Erica Jong's posting that you cited. A similar posting could have been written about the proposed candidates from other parties. I am really, really weary of hearing people tell me that they would not vote for (insert name here) because they don't "like" her/him. I'll vote for competence, qualifications, experience every time over personality that happens to be agreeable to me. I don't have to like a person to work or cooperate with them for the common good!

Ronni, thanks for the visit and the funny comment. I'm guessing she waws hired for her looks and not her smarts, no?

I have seen that video and it is astonishing!