Home About Archive Contact
While Elders Scrabble, Congress Gets a Pay Raise
This Week in Elder News: 19 January 2008

Weather Update and Ollie the Cat

Let me know when you’re tired of snow pictures. I have a houseguest this week and it’s been otherwise busy around here too. This is the best I can do for today.

Last week, Portland, Maine had an astonishing winter respite with the temperature in the 50s and 60s for three days. Of course, with the amount of snow piled up from recent storms, that just left us with ankle-deep slush but it was a pleasure to go outdoors without bundling up enough to look like the Michelin man.

The latest storm, on Monday, was big-time. It began around 6AM and was raging four hours later. You can see how heavily it was coming down by how high it is on the car’s tires. 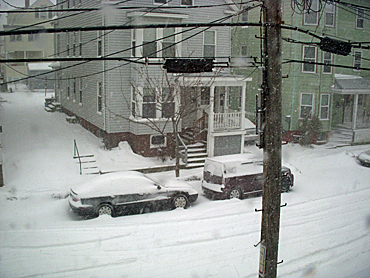 The snow had not let up at all by early afternoon. The sky was low, the winds were high and it felt to me like a holiday – an excuse to set aside even indoor chores, stare out the window and daydream. 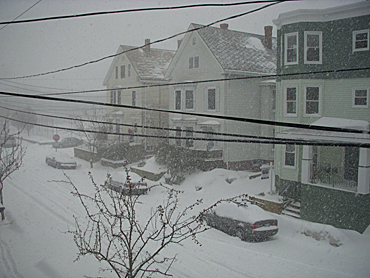 Although the weatherman said the storm would not run its course until 10PM, that didn’t stop an intrepid neighbor from getting a head start on cleanup in the late afternoon. Me? I waited for the handyman to dig out my car and sidewalk the next morning. I think I’m becoming accustomed – or inured – to weekly winter snowstorms. 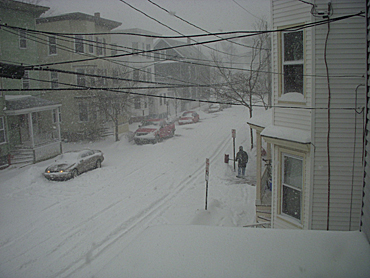 On to cats. They are ever inventive and just when you think you know their repertoire, they surprise you with something new that leaves you puzzling about what goes on in their walnut-sized brains.

Recently, when it is meal time, Ollie the cat has taken to jumping on the counter under the cupboard where his food is stored. He eats there now until he’s had his fill, after which I put his bowl on the floor by his water for later snacking. It has become, at his instigation, our twice-daily routine.

Step back in time a few weeks to when Ollie appropriated a small piece of bubble wrap that came with a gift. Of two or three dozen toys, it became his favorite and I wrapped a rubber band around the middle to give it some heft for me to throw when we play run and fetch.

Now cut to four days ago when, at breakfast, Ollie brought his bubble wrap onto the meal counter. He spent a great deal of time and effort – sometimes sitting back to gauge his progress – positioning it on his bowl to suit whatever mysterious purpose he had in mind… 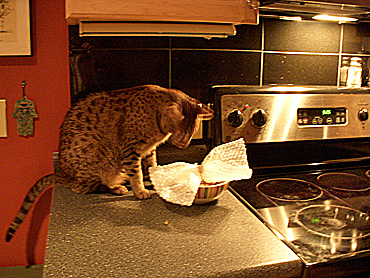 …making it as difficult as possible to get his head in the bowl to eat. When he accidentally knocked the bubble wrap off the bowl, he took time and care in replacing it just so before finishing his meal. 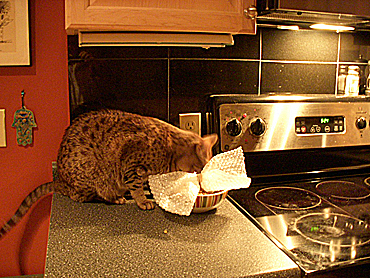 When I later moved his bowl to the floor, he retrieved the bubble wrap from the counter, placed it next to his bowl and then, satisfied, wandered off to find somewhere to nap. For a long time it was toy mice he drowned each day in his water. This is a much trickier maneuver.

And so it goes twice a day with me and Ollie the cat.

[At The Elder Storytelling Place today, Rabon Saip recalls three precious Moments from his life that made an impact.]

You are quite lucky to have snow. Well, I can say that now that I don't have to go out to work in it any more, but it's something we don't get very often in our neck of the woods and it is such a shame for the children not to be able to enjoy it as we did.
As for Ollie, what fascinating behaviour. If you ever come close to guessing why he wants to feed his bubblewrap please let us know.

Thank you. I am sitting here with a nice big smile on my face. A cat smile, that is....not snow.

Awwwwwwwww Ollie is such a character!!! Sometimes I wish I had a pet for entertainment but my landlord doesn't allow it.

I love snow photos so bring on any you have. I think it's because we get so little snow in my part of Oregon and when we do, it's gone instantly. A travel advantage but it leaves one feeling snow deprived at times and I get my fix through photos of it-- or a trip to Eastern Oregon if I am feeling truly in need.

Ollie is beautiful and obviously very intelligent. It's interesting his ways of amusing himself; but we have those kinds of things that bring us pleasure also. Cute photos as always of him

You live in a picture postcard! I assume you like to leave the postcard occasionally, so I hope the snow melts quickly.

I never get tired of the snow pictures. I grew up in Pennsylvania with plenty of snow and still love it.

I also love Ollie the cat and his complex habits and antics.

Never a dull moment with that boy.....

GREAT cat story. I am now going to create such a contraption for my fabulous feline friend. And I see a lovely hamsa on the wall.

How dare you state on your blog so that the whole world can see and I quote:

Hurmph!! To imagine a maneuver as complicated as the bubble wrap caper takes a superior intellect and a brain the size of a kiwi at least.

Ollie has personality! My cat, FiFi, is jealous of her bubble wrap. FiFi has currently taken to sitting in front of my monitor and watching the words appear as I type, which makes it hard to know what I've written!

Your snow is beautiful but I love my good ole Southern Utan where there is hardly ever snow. We grew up near Salt Lake City and enjoyed it as kids and young parents but now that we are older we sure love the desert!

That is seriously one of the cutest things I've ever seen. He loves that bubble wrap!

He is so gorgeous. What type of cat is he to have those spots? Does he shed?

I'm going down the hall now to once again harrass my live-in boyfriend about his cat allergies.

ah, okay, just read your older blogs and learned he is a Savanna. No wonder he's so beautiful!

Isn't the ability to amuse yourself a sign of intelligence? Ollie must be one smart kitty. :)

Weather and companion animals--two of my favorite topics. Sharing one's home with a different species--in my case, dogs--gives you a tiny glimpse into a wonder-filled Eden. Snow, not so much...

Oh I love the stories and photos of Ollie - one very crazy (smart?) cat. And just looking at those snow pictures makes me shiver, and be glad I'm in Arizona.