Elders in the Blogosphere

There is a new demographic study about adult bloggers (18 and older) from BIGresearch, reported here, that has a large enough sampling to mean something – 15,727 people.

The largest political bloc - 37.6 percent - are Libertarians. Democrats and Independents, 26.9 percent 25.7 respectively, come next and the smallest group, 22.9 percent, are Republicans.

Ethnic minorities are represented in larger percentages than their distribution in the general population: 12.2 percent African-American; 20 percent Hispanic; 3.7 percent Asian.

Then we come to age. While the average in the adult U.S. population is 44.8 years, bloggers are younger - average age, 37.6. But look at this chart. 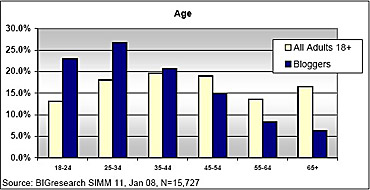 UPDATE: Jonathan Boehman, in the comments below, explains how I misinterpreted the graph above. He's correct and I've reworked the number of elderbloggers based on current U.S. population and making a fairly well-educated, low-end guess that there are 20 million blogs in the U.S. That means there are about 1,200,000 bloggers 65 and older (6 percent of bloggers), and 1,600,000 in the 55-64 age range (8 percent of bloggers). A total of 2,800,000 of us. So I still wonder how I'll get them all on the Elderbloggers List.

For comparison, nearly two years ago, in May 2006, an infoZine survey reported that 5 percent of Americans age 50 and older had created blogs. It is a different survey with different age parameters so the comparison is not exact, but it is clear that the number of elders in the blogosphere has zoomed upward. The latest Pew research, published 15 February, reports that 72 percent of U.S. people 55-64 are online (not necessarily blogging) and 37 percent of the 65-plus age group.

This is remarkable considering that many people older than 65 had never used computers before they retired.

If I had my way, every elder with the barest interest would be encouraged to blog. It expands social circles, teaches new skills, requires quiet reflection and active thinking to organize facts and thoughts and to write coherent stories. Elderbloggers are also sharing expertise, telling our life stories, teaching and learning from one another and having more than a few laughs too.

God knows I could be wrong, but I suspect that as the younger set continues to move to quick-hit, social media sites like Facebook, MySpace and whatever the next iterations may be where the emphasis is on collecting friends and “poking” each other, elders will stick with blogging. Writing is what we know and telling our stories is important to us.

That doesn’t mean, as the technologies get easier, elders won’t add audio, video and other improvements as they are developed. Some elders already have. (The one thing about technology you can be certain of is that it will change.)

But I’m betting most elders will stick mostly with words, complete sentences and well-developed thought. It’s what we’ve known best since our school days. It could even be that in time, blogging will become an elder ghetto. And that is fine with me.

[At The Elder Storytelling Place today, Lia tells of her experience fighting a local social custom in No Baking Zone.]

There are a great number of elder bloggers on hive sites such as Open Diary where I also have a page. Although a few wonderful people read my Blogger page, I've formed a network of friends on OD that I truly appreciate. Perhaps many elders blog on pages like these than do out here in the real world. My problem now is finding the time to read all the blogs anywhere that interest me.

Thanks for these statistics Ronni. I am blown away by the numbers...incredible and growing!

fascinating. thanks, ronni. makes me wonder why all the bloggers i know in person are very much younger. elders hiding out in nyc?

Hi Ronni,
Just a friendly note--I think you may be misinterpreting the graph: 6% of bloggers are 65+. I think you were implying that 6% of the 65+ population are bloggers.

What this graph intends to show is that younger people make up a greater percentage of the blogging population than they do of the general population.

Blogging will become an Elder ghetto

Verrry interesting! How many bloggers are there? So, the new interpretation is 6% are 65+ and adding the 50+ is sure a lot of folks. Get the calculator out again.

I do hate it when statisticians provide unequal spans when presenting the data. Note that from age 15 (if I'm reading the tiny print on the x-axis correctly) to age 64, the age spans are 10 years. My gosh! The 65+ span may be 40 years! Not a great comparison. I do agree with Jonathan upon his interpretation of the graph.

Since launching our Ageism in America blog last fall, we have been watching the various players in the elderblogging community with great interest, and have noted that "Time Goes By"is a stand-out among them, exceptionally well-researched and written.

We are happy to say that we have featured it in our latest post: Elderbloggers: A Cyberforce to Be Reckoned With.

Also, since you have kindly mentioned our organization and its research in several of your posts, we hope you don't mind if we take this opportunity to let you know about a forthcoming book from our President and CEO Robert N. Butler, M.D., entitled "The Longevity Revolution." You can learn more about it by visiting www.thelongevityrevolution.com.

Many thanks for your tireless work on behalf of the aging community,