Contrary to what I said in Tuesday’s post, I do still have one outside project that needs to be completed today, so there’s no time for a post that takes much thought or research. But I’ve been meaning to ask the gardeners among TGB readers what they make of this.

When I moved to Portland, Maine, in June 2006, my first visitor was ML who blogs at Full Fathom Five. She arrived at my new home with a trunkful of plants for my deck and it would have been a barren place that summer without her gifts.

Among them was this jade plant. Jade plants are not uncommon. I’ve had them as houseplants several times in my life and watched a tiny one I once gave my mother grow into a behemoth over several years, nearly five feet tall. 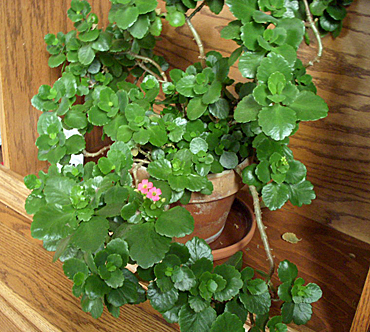 I thought I knew pretty much all I needed to know about jade plants: they are green, they have fleshy leaves and they are hardy souls that tolerate minor abuse like forgetting to water them sometimes.

I keep this jade plant from ML on my deck during the growing season and bring it inside to stay warm through the winter. It has survived well with its moves indoors and out. But look more carefully at this plant. Here’s a close-up of what I encountered two weeks ago: 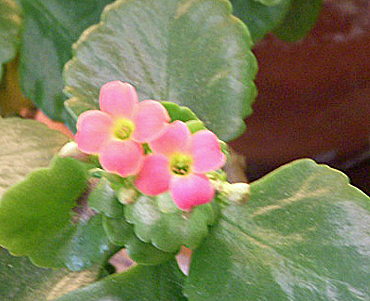 Who knew? I surely had no idea jade plants can sprout flowers and just yesterday, two additional, little blooms began emerging on the same stem as the first two which have not faded at all since they first appeared.

Like I said, I’ve never seen a flower on a jade plant before, and this is the first since ML gave me the plant 18 months ago. Does anyone have any information about this? Do all jade plants bloom? How often do they bloom? Are the flowers always this color? Is there a way to encourage blooms?

Ronni One of my loves is gardening. I could be wrong but when I look at the picture of your plant it looks like a type of Begonia to me. I have one I alternate between screen porch when spring arrives to inside during cold months. It is about 15 years old and blooms. I also have a Jade plant and it has never bloomed. But I am not an expert.
Have a great day.

Interesting, Ernestine. When I published a photo of this plant more than a year ago, a reader said it looked like a jade plant. So maybe the first step here, is to figure out just what this plant is...

Commonly known as jade plant, friendship tree or Money Plant, Crassula ovata is a succulent plant that sometimes has small pink or white flowers and is common as a houseplant worldwide. The Jade Plant is also sometimes incorrectly referred to as the money tree; however, the tree Pachira aquatica is the original "money tree."

There is also a picture.

I had a jade plant for years and it got so big we trimmed it for Christmas. It never had flowers.

We also went away for the whole Winter and it thrived in our cold house and with no water.

BUT,it didn't look exactly like your plant. The edges of the leaves on my jade were not curly or scalloped like yours. They were smooth all the way around.

I am no botonist but I'm not sure you have a jade. Perhaps Ernestine is correct and you have a type of begonia.

I lived in Vermont for a while and a friend of mine there had a jade plant that flowered. It amazed me as well. I thought it flowered because it was tickled pink in its environment; that is, optimum conditions were present: right light, moisture, temperature, etc. and it was showing its gratitude. To be fanciful.

I thought my name would automatically appear but it didn't.

I've forgotton what that's called, but it isn't a jade plant. Jade plats do bloom....in clumps of little tiny white flowers. If you took a leaf of this to your favorite nursery, they could tell you what it is today.

I thought it was a Swedish Ivy...which I now know is a kind of begonia. Who knew?
http://davesgarden.com/guides/pf/go/1354/
also found it called Creeping Charlie.
I love this plant: easy to grow, very forgiving.

It is a beauty, Ronni.

I have some very big and old jades. Only one of them ever blooms, about right now. They like to be cool and dry in the winter, and they certainly are in my unheated solarium. Here's a photo of it: http://www.marja-leena-rathje.info/archives/awaiting_spring.php

I believe this is a kalanchoe. If you do a image search, you should be able to find one such as yours-- there are many, many varieties and they do produce lovely little flowers.

Jade leaves are much more plump than the kalanchoe.

That's what it is, a Creeping Charlie. I've been wracking my brains beacuse all that would come in my mind was....something Charlie.

Ronni just came in from eye doctor appt and checked your responses. I am almost laughing
There are many many varieties of plants.
With my old fashion garden with old fashion perennials with names like my mother and grandmother called them I would probably still call it a begonia and smile.

I vote begonia too ... I don't know very many plants but I have had a begonia and it looks like this one ... although YOURS looks much healthier!

It's been years since I've had a Jade plant but to be certain, when I did have them, I never once saw a beautiful pink flower. I'm gonna go right out and get me one. It's been far too long.

Yes, it is a kalanchoe. Begonia leaves are not as thick and "juicy" as these.

I agree that it is NOTa Jade tree or Jade plant although it is rather succulent. Kalanchoe relative very possibly.

I have always called this Swedish Ivy because it twines as your does in the picture like ivy. How fortunate are you have a pink flower. I have seen cream colored flowers on "Swedish Ivy " but they were older plants.(Ah something good comes from the Elders!)
"Yes," to the person who said that Jade plants bloom with clusters of tiny white fragrant flowers growing in pot-bound sunny locations.I have seen lots of them in Seattle blooming in the winter this way.
The leaves on the plant you show are not thick enough to be a jade plant. and Jade plants do not twin like ivy.

The suggestion to take a leave to a local nursery is a good one.
What I like best about Swedish Ivy if that is what this is would be the spicy fragrance of the leaves in the sunshine. Knocks me out.

I love this plant..

Ronni, your beautiful plant definitely is a kalanchoe. They bloom in various colors--pink, red, orange, etc. A nursery lady told me to basically ignore them in winter (not too much water)and they'll bloom again the next year. Usually you can buy kalanchoes (pronounced kal-an-ko-ees)in small pots in fall at some discount stores. Yours is so pretty--enjoy. Hope it lives and blooms for you for many years.

One more definitive vote for a kalanchoe (although I've never pronounced it as the last poster says it should be). I know at first glance at the picture what it was. I've had plants since about 1976, when someone gave me one, and I've broken stems off or stuck leaves in pots to make new plants from it. I don't know what generation I'm on now, but still have a few small ones tucked into various pots around the house. Mine don't flower often, like the supermarket plants, but they did in a winter window in NC in the '70s and in my Miami yard in the '80s and '90s and I'm sure they will again once I stop moving them around in and out of the NC house.

My wife and I have a plant that we have been calling a jade for over 25 years. We keep it in a rather small pot so it has not grown larger than the one foot or so diameter that it presently is. Today, I went to water it and lo and behold there was a pink flower on it just like the ones in your picture. This is the first time ours has ever bloomed and we are delighted! Now, we need to be sure just what it is. Based on the new onformation found here, I believe we have a kalanchoe. I worked in a flower shop as a delivery driver for a few years and saw quite a few kalanchoes that had flowers exactly like this. In fact, I told my wife when we saw the flower that it looked like a kalanchoe flower. However, since the plant was given to my wife from her aunt through her mother (both deceased) and they called it a jade, she is resigned to calling it a jade. No matter what we each call it, it is beautiful just the same.

This is very definitively a kalanchoe.

Definitely a Kalanchoe! This isn't a jade plant. I had one of these for years.

it is definitely a kalanchoe

Hello! That's a flaming katy! My mother has one with an orange flower.

I have a Jade Plant too in my garden. And they were so pretty when in bloom.

My husband bought me a kalanchoe plant for mother's day and it's still blooming, 6 months later. The flowers on mine are peach colored, very pretty. Yours is definitely the same plant. The leaves on this have a more rubbery feel than the jade plant, which I also have.

Hi, I'm glad this plant bloomed for you, it's very pretty!

This is not a jade, I've harboured Jades for 30 yrs or more sadly, I've yet to see them bloom

Here is a link to a blooming Jade.
http://neilhanson.com/jade-blooms/

There's a trick to getting them to bloom.

First, it has to be an old plant - many years old - before I've been able to get them to bloom.

Second, they bloom in the fall/winter, in response to some very specific stimuli. I live in Colorado, and we have cold nights - even in summer. In the fall, I leave it out as long as I can - letting it adjust to really cold nights - before the risk is too big and I need to bring it in. I bring it in, set it my a sunny southern window, and the buds will begin to form within about a week or so.

I discovered this set of criteria all by accident over the years, and I suspect that unless you live someplace where you can expose the plant to cold nights at the right time of year, it might not work.

By the way, the link above is to my site where those photo's are - contact me through that web site if you want more pics or more info on how this works for me. Thanks to Mia for the post!

Kalanchoe- No two ways about it.

Thanks for posting this and for comments. I have this kind of plant and was struggling to find out what it is. Now I know I have a Kalanchoe :)

Sorry but that is not a jade plant.