For the past eight years, the College of Pharmacy at the University of Texas at Austin has operated an outstanding learning program. In CARE (Care And Respect for the Elderly), each first-year student is matched with an elder resident from one of several, nearby assisted living homes to help provide companionship, learn how to care for elders and develop the kind of communication skills they will need to work with elder customers in their future careers. And, it benefits the elders now.

“The student visits give the resident chance to meet someone new,” [says Brandon Erickson, executive director of one of the participating assisted living homes] – someone young and energetic who is making a novel career choice. They are flattered that a college student would take the time to get to know them. The resident may be 60 or 70 years older, but there is always a connection that can even lead to a lasting friendship.”

Seventy? Try 81 years. That’s the age difference between 21-year-old student Steven and 102-year-old retired geologist, Mr. B, who lived as a child in the “Indian Territory” – what is today Oklahoma. Because his grandparents either live far away or have died, Steven has never had a relationship with an elder before. The two men spend their time together indulging in Mr. B’s passion, dominoes, while Steven is encouraged to help track his new friend’s medications.

“All of the students can look at medical charts and observe how residents take their medications as they learn about the different medicines and the importance of medication adherence.” 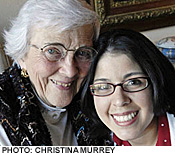 According to one of the instructors, the students are amazed that even with numerous health problems, most of the elders maintain positive attitudes about life. Erica is paired with 89-year-old Sarah, who has participated in the program for four years. “I’m around older people most of the time,” says Sarah, “so it’s nice to have a young person come see me. We enjoy our girl talk.” For her part, Erica wants to be just like Sarah when she is old.

Heather, a third-year student who was Mr. B’s companion when he was 100 years old, says sometimes new students are apprehensive about how to talk with elders:

“Initially, you may not know what to say to the elderly person, perhaps thinking you will not have anything in common. We have this fear they will be fragile or not be able to understand us, but there is a lot more common ground than you think. The program helps you get over these sometimes preconceived communications barriers.”

I would prefer the program be named Care and Respect for Elders rather than the Elderly, a word that suggests frailty and insufficiency, but that is a quibble compared to the knowledge and understanding these students gain and will use throughout their careers. The medical school community could use a dose of what the CARE program is teaching.

According to Dr. Robert N. Butler in his new book, The Longevity Revolution, the first geriatrics department in the nation was not founded until 1982 and today, 26 years later, there are only 11 departments of geriatrics among the 145 schools of medicine in the U.S., which certainly accounts for the declining number of geriatricians. In Britain, every medical school has a geriatrics department and geriatrics is the second-largest specialty.

[At The Elder Storytelling Place today, Peggy Race has a real-life Scottish Ghost Story for us.]

What a great program!!!! It would be lovely to see this spread like wildfire but, alas, I sort of doubt that will happen.

It is wonderful that the pharmacists-in-training are provided the opportunity to interact on a one-on-one basis with elders in Austin.

CNAs (Certified Nursing Assistants), CMAs (Certified Medication Aides), and LPNs (Licensed Practical Nurses) provide the bulk of the care to elders in the USA. They must work with the pharmacists, physicians, RNs (registered nurses), and physical and occupational therapists in assuring that elders receive appropriate medications and physical therapies. Among those I've known, the vast majority of the above-listed care-givers work with elders because they love being around elders. My own granddaughter (now an LPN), began volunteering at a nursing home when she was but 12 years old. The younger generations obviously feel that they gain something, for themselves, in their associations with us elders. Of course, a certain percentage of the care-givers are, themselves, elders!

This sounds like a wonderful idea! Intergenerational understanding can be a big plus as the number of us elders grows. As I blogger, I notice that I get most of my appreciation from younger people; perhaps it't a trend. If so, it's a good one.

That's great stuff, Ronni. Thanks for letting us know about this. I wish there was something like that where our friend, Duck, lives.

Thanks for sharing this, Ronni. I think it behooves us to acknowledge the positive trends in inter-generational communications wherever we find it. Hopefully, the trickle will turn into a stream, which will turn into a river...

The Butler book sounds like it's time for a trip to the bookstore!

What a great program. I only wish there were one where I live. I could use a dose of having youth around.

About 20 years ago (while living outside of Philadelphia in a Quaker town)the local Friends School did something similiar to this. Juniors/Seniors were assigned an elder in their local Friends residential facility. It was both assisted living & nursing home. The campus altho' small, connected the school with the residence. Students had to keep a journal/diary & have a plan for developing a friendship with their elder. Altho' there was a minimum of time required each week to spend with these folks many like our neighbor did far more. Some families invited residents to their homes for tea or Sunday dinner & many also continued their friendships beyond what the program required. It did so much for everyone & of course for the community. Let's hope they continue to develop more programs like this. Dee

"there is a lot more common ground than you think" how true, how true!

and one can only come to that conclusion by having taken the time to find out.

I hope this idea spreads so that more programs create the opportunity to see the common ground amongst us all.

Thanks for this post. I had an opportunity as a psychologist to participate in a similar program. It was fascinating on many levels and I really learned to talk with older folks in a new way.

I also wanted to comment on the issue of elders and elderly. I've been reading some material on gerotranscendence and trying to sort this out. That last stage of development probably is comprised of elders, in the traditional sense of the wisest of the wise. So I kind of hate to see that term usedfor all older folks (which is what I call people over 75 or 80). Yet I agree with you about the picture people have in their minds when the word elderly is used. Frail elderly is even worse. I'm not sure about all this...just thinking about it. Thanks for all you do.

I recently had the honor of bringing together 20 high school students and 20 elders (75 years plus) in our local city council chambers for an introduction and sharing of ideas about intergenerational learning. The energy was amazing. Its taking some time, but I am pursuing the notion of an intergenerational discussion group. Further information on my web page under “Intergenerational Links and Activity.”

My dad was mentally alert until his death at age 96. He would say, in his own way, that he had a young mind trapped in a failing body. He had lots of friends, but especially liked to visit with young people.

I think of my dad when I visit with elders. Just because their body needs a walker doesn't mean their mind is weak.

I love to see these intergenerational programs and the stories they reveal. I truly believe that the only way we can overcome the built in stereotypes of aging that all the anti-aging labeling
has created and continues to generage (sorry, couldn't help myself) is to continue to seek out and publicize and promote such fine programs that I know exists quietly in different communities.

One of the ones I have heard about for some time now is The Storybridge Program which was developed in 1993 by Stagebridge, the oldest senior theater company in the nation. The program uses storytelling as a tool for improving students' language arts skills and bringing elders and youth together.

"Language development and performing arts are essential elements to the curriculum taught at the elementary school level," said Rose Woo, teacher, Bella Vista Elementary School in Oakland. "The programs that they offer schools are invaluable."

Stagebridge recently completed a three-year implementation grant from the U.S. Department of Education's Arts in Education Model Development & Dissemination Program. The results of a two-year independent evaluation of the program by 3D Group were released in 2007. The 3D Group evaluation concluded that "Storybridge students significantly outperformed control students in three areas of listening comprehension." After participating in the program, students were able to recall more elements of a story when retelling it, understood the structure of a story and could recall richer details, the report stated. "It's something that children will remember for the rest of their lives," said Deitra Atkins, principal, Glenview Elementary School in Oakland.