Aging Together: So Like Their Peers, But Different Too

[EDITORIAL NOTE: Gay and Gray is a monthly column at Time Goes By written by Jan Adams in which she reports on issues of aging lesbians and gay men. Jan also writes on many topics at her own blog, Happening-Here. 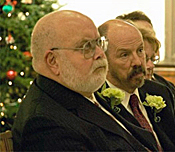 Nine years ago two single people met. They were both in their fifties and without partners after long previous relationships ended by illness and separation. Their friendship grew. Like many elders, they realized that continuing to live in San Francisco would not be affordable or even pleasant when they retired. They visited central Ohio where one had grown up and the other had had relatives living in the past, and decided to buy a house in a small town. Shortly thereafter, they decided it was time to tie the knot. Their relationship was blessed by their church on December 30, 2007. This summer, they'll move to Ohio for good.

This happy story would be quite unremarkable, except that Gary and Stuart are gay men. They were kind enough to talk with me about their partnership and their planned move.

On retirement: Gary was almost thrust into involuntary retirement a couple of years ago when the family-owned wholesale supply company for which he had worked for 32 years ("minus two weeks," he emphasizes) was bought out. The new corporate owners wanted younger workers. He was lucky enough to catch on at a similar job running data systems for a storage company. But the abrupt lay off turned his attention to making a future without employment.

Stuart's work, on the other hand, will remain similar as long as he is with us; he's a Vietnam vet on long-term disability whose "work" has been getting the Veterans' Administration to care for his needs. He was part of a groundbreaking study of PTSD in the 90s that set the pattern for care of his generation of vets and he generally applauds the system.

On choosing to move: there's more to this move than economic necessity. The city they've enjoyed for decades has begun to feel inhospitable. Gary says that these days San Francisco seems to him "crowded, congested, uncivil, thoughtless." And so they looked to the country, choosing a town in Gary's state of origin that has a nearby VA hospital. And they were able to find a big house they could buy outright. Both have family back East. And there's an historic Episcopal church to consider joining.

On family: Gary and Stuart are of a gay generation in which relationships to our families of birth are often conflicted. Gay people a little older than these two usually had clearer, if unsatisfactory, paths: they were either thrown out by family for perversity or their "peculiar" relationships simply went unacknowledged. Young gay people today, though their orientation may cause their families great distress, nonetheless belong to a recognized type. But gay people currently becoming elders live in an in-between world.

So when the guys went east to look for a retirement location, the visit involved introducing their new partners to their surviving parents and siblings. There was nothing easy about this. Both of them express a shy wonder that they received what younger people might consider a tiny measure of acceptance.

Stuart's brother and sister-in-law are Pentecostal Christians and Republicans. Gary's father is an Ohio Republican bigwig and a "rock-ribbed Presbyterian."

Gary and his father had had always had an unspoken "don't ask, don't tell" agreement about his orientation, even all the way through his losing his previous partner of 22 years to cancer. But Gary took Stuart "home" to meet his father. As they were leaving, he was overjoyed to hear his father say to Stuart, "welcome to the family."

When they decided to have a church commitment ceremony, they felt they were being a little bold because they invited their families. They were delighted when a nephew wrote, asking for a picture -- "we want to see him." And Gary's sister even traveled to San Francisco to be part of their big day.

Stuart and Gary’s story is so like that of many of their heterosexual age peers. But being gay men of their generation carries additional worries – and occasional surprising joys. 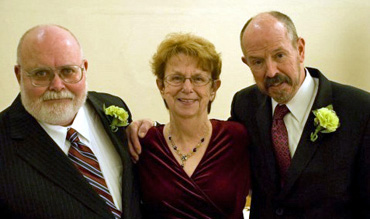 Stuart, Gary's sister Jeney and Gary at the ceremony blessing their union. Photos thanks to Patrick Lane and Michael Reardon.

I have a dear friend who is gay and lives in Manhattan. He is funny, clever, and charming. He recently lost his partner of appproximately 40+ years and is grieving deeply.

He has one sister who is a conservative Christian and she will only acknowledge his sexual orientation when forced to do so. Her reply is, "Hate the sin; love the sinner." I despise that statement because any knowledgeable person knows being gay is neither a choice nor a sin.

His family do love him and he is accepted and loved, but his being gay is never acknowledged. I find that sad.

What a lovely story and heartwarming that the family accepts the relationship and love partner for what it truly is. It will be good when the day comes that it is taken for granted that will be the case-- unless the new partner has an obnoxious or dangerous quality. We have come a long way with further to go

What a beautiful entry. Thank you for posting this. Our friend in the nursing home is gay....as are many of the single men there. I will follow the links.

Glad to see the telling of their experience here. Their story helps increase awareness of gay couples in long term relationships contrary to stereotype images so often portrayed elsewhere.

Am pleased to hear this story has worked out so well with family, especially in the more conservative state to which they've moved. Even here in Calif. acceptance by a non-gay person of gays as friends can sometimes challenge relationships with other non-gays. Hard to believe their are still those who don't understand even the science of differences in individuals.

Correct that last "their" to "there."

What a wonderful story, Jan!!!
I'm wondering where in Ohio, they're going to be. I'd bake and take them a cake if they aren't too far away!

Hearing about people being able to be themselves brings tears to my eyes, especially when they have to wait so long for it.

Thanks, Jan, and to Jane R for the directions.

I knew as soon as I saw the photo which one was Stuart. Thanks to you and to him for acknowledging our work. My experience with VA has been more positive than not, too, but there are moments.

Godde's blessings to them both, and to their families, as we learn how to live together in Godde's love.

Thank you, Jan, for this lovely article, and for posting a link to it over at my place.

We LGBT folks are really quite boring... living, worrying about health care, navigating delicate family relationships... just like everyone else. Good to be reminded.

What a handsome couple and sweet story! I am even more happy to read the wonderful comments. One thing I try very hard to do is to celebrate the life events of the people around me. It demonstrates my love and support of them and helps create visible role models for the community.

I am a lesbian from a small town in Texas and I grew-up in the Baptist church. I moved "to the city" when I left home for college. My domestic partner and I have been committed to each other 37 years now. Both of us spent our professional lives teaching psychology at universities. We lived as a couple, but did not encourage others to ask and we didn't tell very often. We are 67 now, retired and living in CA. Hearing the outragious, deflamatory, personally offentive condenmnations of me and the love that my partner and I share is extremely painful. I just don't get it. Why would anyone CHOOSE to live so counter to the expectations of their social group and family? I had no choice. How can my behavior be a sin? I fought it and tried to be heterosexual. My partner even married a man hoping she could stand the pretense. Stop the cruel persecution of innocent, moral, productive, patriotic Americans who were born homosexual. Stop the hate crimes--gay people are killed every year because of the hostile atmosphere that these extremists want. You, heterosexuals, must stop them from giving the most violent in society permission to take their anger and hate out on us.