Last Monday, I took to task a reader named Susanne for an uncharitable comment she left about a fun conversation we were having about those unexpected moments that tell us we’re no longer part of the younger generation. Uncharacteristic of people who behave like wet blankets, Susanne returned to apologize, saying that yes, she had been a “sourpuss” and was having a bad day when she wrote that. I just want to acknowledge her today and say, hurray for Susanne. We all have bad days now and then and it's not everyone who admits it (ahem, moi?). 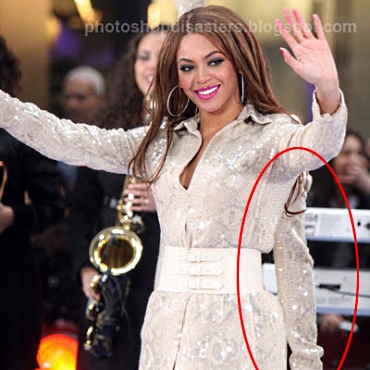 Do you see anything peculiar about this photograph of Beyonce? I wasted a lot of time this week and had a load of fun doing it while I checked out the so-called professionals’ photo-manipulation mistakes at PhotoshopDisasters.com. It’s the same idea as discovering film errata like an airplane flying over the desert in a cowboy movie. What a hoot, and who knew there were so many.

In a week filled with bleak news about the world, governments, politics and all, I seem to have had a lot of fun online. Don’t miss The Official Village Voice Election-Season Guide to Right Wing Bloggers. Writer Roy Edroso’s sharply-worded, dead-on critiques are laugh-out-loud funny and worth every minute you’ll spend with this long survey even if you’ve never read the bloggers he speaks of. I especially like his “stupid/evil ratio” for each one.

Lots of people, elders and the young, take anti-oxidant supplements such as vitamins A, E and beta carotene. Now researchers have released a review of 47 studies that included hundreds of thousands of subjects, concluding that "antioxidant supplements significantly increased mortality". So much research is released about what foods and drugs are good or bad for us that it’s hard to know which ones to trust, but it’s probably a good idea to get essential nutrients from real food.

In Japan, auto maker Nissan is using an “elder suit” to help design cars that work better for old people. Take a look, and listen to what the young man wearing the elder suit says. (1:55 minutes)

Last month, we had a good discussion about electronic health records, their advantages and disadvantages particularly with everyone’s privacy in mind. Now comes a study published in The New England Journal of Medicine warning that companies like Google and Microsoft, both of which are launching health-records websites, are not bound by HIPAA privacy regulations and pose a risk. Read more at the NEJM or the short version at The New York Times.

Science Daily reports on a research study from the University of Chicago showing that elders are the happiest age group:

“The increase in happiness with age is consistent with the ‘age as maturity hypothesis,’ Yang said. With age comes positive psychosocial traits, such as self-integration and self-esteem; these signs of maturity could contribute to a better sense of overall well-being. Second, group differences in happiness decrease with age due to the equalization of resources that contribute to happiness, such as access to health care, Medicare and Medicaid, and the loss of social support due to the deaths of spouses and friends, Yang added.”

In case you haven't dropped by Alice's blog, My Wintersong, in the past day or so, look what I found there just in time to end this week's Elder News list with a demonstration of the kind of magic no one gets too old for. (3:00 minutes. Anyone who feels compelled to tell me how this is done, please don't.)

Oh, Thanks for the laughs and the smiles to start my day. On some of these I am up to date, but the Photoshop site, will do me in......oh, delightful.

I am in awe of the magic trick. This guy could make Houdini jealous.
Fantastic trick. Thanks for showing it, Ronni.

The magician is Chris Angel. I've seen him do some amazing feats of magic, some even more spectacular than this.

He had a series on TV called Mind Freak. If you watch any of the reruns, you won't be disappointed.

Wow! That magic trick was great. I'm glad that Darlene mentioned the magician's name. He is fantastic.

Thanks for the plug, Lydia, but I can't take credit for the magician's name. George P. was the one who mentioned the name.

Thanks to Alice for sharing this marvelous video with us. I, like you, have no desire to know how it is done. I just enjoy the trick.

Does anyone remember Mr Ballantine who billed himself as the World's Greatest magician and every single trick he did turned out badly? He was so funny and I miss that type of act, too.

Don't you wish they would bring back the Variety Show ,something like Dean Martin's or Carol Burnett's ?

I am so tired of Law and Order! It's on 7 nights a week on 4 different channels. I could write the script for it by now.

Love this section on elder news. Especially enjoyed Chris Angel. Have seen him several times and he is amazing. Makes me believe there really is magic.