Let's hear it for elderblogger, Mary Lee Coe Fowler of Full Fathom Five. Her book of the same title as her blog, to be officially published on Tuesday, is about her quest to learn more of the submariner father - who died in World War II - she never knew. There are links to excerpts from the book at Mary Lee's blog and it can be purchased at Amazon.

Are you up to speed on Net Neutrality? As the internet works now, everyone - small blogger or giant corporation - has the same access. (Well, unless your ISP is Comcast, and that makes the point.) The telcos, including Comcast, want to change that access so some are more equal than others.

They want to do this by controlling which content is transmitted and at what speeds - for a fee, of course - and if they succeed, the internet will be more like cable television and less like the two-way street it is now. Our blogs - our little First Amendment machines - are at stake. You can get details at savetheinternet, and here's what Senator Obama has to say on Net Neutrality. [:51 minutes - Hat tip to Marion Dent of And the Beat Goes On]

Three years after Hurricane Katrina, the largest encampment of FEMA trailers - 600 - in the tiny town of Baker, Louisiana, will soon close. Mayor Harold Rideau's story is worth knowing, for when larger communities all over the south refused to allow temporary housing for storm victims, he welcomed them and did everything possible to make their time in his town livable. For all the failures following Katrina, here is one man who did the right thing.

In the dumbest attack yet on Senator Obama, last week someone attached to the Clinton campaign complained that Obama was a "copycat" for appearing on the same episode of The Colbert Report as Senator Clinton. As anyone only half awake at the wheel knows, no one appears on any television program without an invitation. Here is Colbert's hilarious response. (2:47 minutes)

Traditional newspapers have taken a beating in the past few years from attacks on their credibility to shrinking readership and revenue. But last Sunday, The New York Times published a great piece of journalism by David Barstow, which is the result of a two-year investigation into what must be the largest, government disinformation campaign in U.S. history.

For years, dozens of retired military officers (you've seen them almost every day on cable news since 9/11) have been handed their talking points by the Bush administration and sent out to spin war information many of them know to be false to news organizations, most of which never questioned the information or the generals' financial ties to defense contractors.

The story is long, detailed and although you always "knew" this stuff goes on, here is the proof and you should read it if you haven't done so yet. 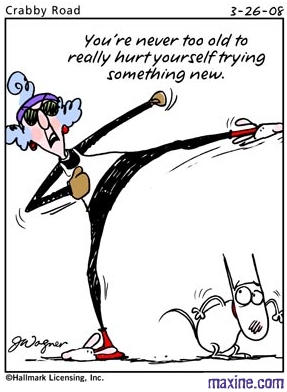 For Maxine fans, the blue-haired cartoon character is now blogging, although so far there are only three posts. You can also find a new cartoon there every day. [Hat tip to Suzz of Suzzwords]

Quote of the week:

"Benedict directly challenged an assumption so many Americans make about religion: that it is a matter of private devotion with few public implications.

"Not true, said the pope. 'Any tendency to treat religion as a private matter must be resisted,' he told the country's Catholic bishops Wednesday. 'Only when their faith permeates every aspect of their lives do Christians become truly open to the transforming power of the Gospel.'"

What a hoot! Now the Pope wants us to become more, not less, enmeshed in religious quarrels in our politics. Isn't it sad enough what we've gone through with the religious far right wing of the Republican party? Isn't it sad enough to see what factiousness abounds in other regions/countries of the world where religions are in-your-face-public. Isn't it sad to think of the murders and rapes that have taken place in the last few millenia in the name of various religions?

When all of the practitioners of all of the religions get together and settle their differences and become peaceful co-existers, then and only then, will I even consider listening to any religious leader on politics or matters of civil concern.

Thanks for the link to the article on the generals. It speaks volumes about the perfidy of this administration.

Wow. Guess the pope didn't read that part from Jesus about praying in private behind closed doors.

Huh. What a surprise.

Thanks for introducing me to Maxine!

I wasn't aware of that about Comcast and have all their products. I still don't quite understand about net neutrality but will read more and do my best. Thanks for that information as well as all the rest. Your blog is a treasure trove of relevant issues and news. I'm thankful for you. :-)