Today, day three of The Elderblogger Survey results, we’ll take a look at the questions about technology and the internet.

Before we get started, here’s the standard reminder about this Survey:

Nevertheless, because the survey was distributed mostly among elderbloggers themselves and other elders who read blogs, we can get a bit of an idea of who we are and what we are like.

390 people responded to today's questions unless otherwise noted at the end of a question in parentheses.

26. What kind of telephone(s) do you use? (Check all that apply) 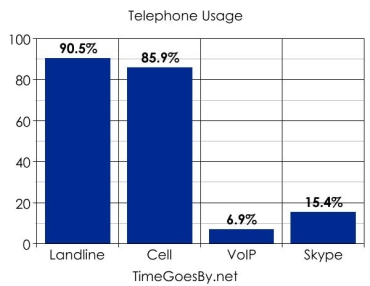 27. What kind is your primary computer?
Two answers fall outside the graph numbers. One person uses a computer of unknown type at the library and another uses all. 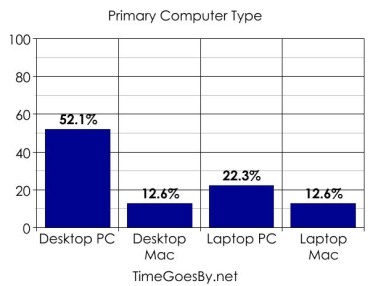 28. How did you learn to use a computer? 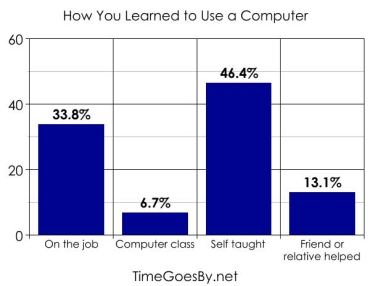 29. How long have you been using a computer? 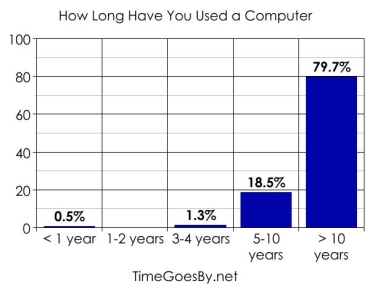 30. What is your level of computer proficiency? 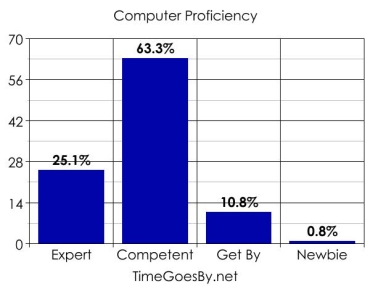 31. What other electronic equipment do you use?
Don’t ever let anyone tell you that elders don’t or can’t keep up with new technology. We are using a lot of electronic stuff. iPod on the graph is shorthand for any type of handheld music or video player. I singled out Wii from other game systems in the survey because it has become so popular at retirement communities. To make the graph more readable, I've divided it into two parts. Multiple answers were allowed. 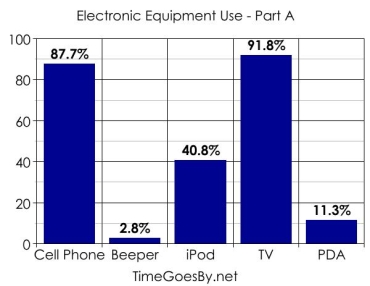 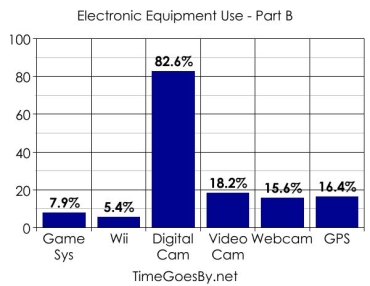 One or two people each wrote in additional electronics that are not included in the percentages above:

I did not include write-ins of DVRs, Tivo and DVD/video players because undoubtedly others who checked TV also use those technologies, and as they were not listed as choices in the survey the numbers are not useful. 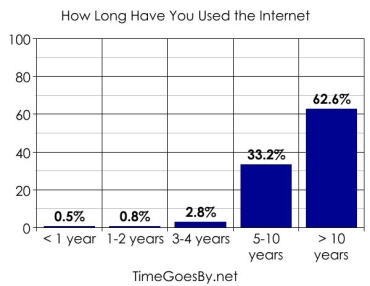 33. What is the speed of your internet connection? (388)
Most of us are using the fastest speed possible to get to the internet. I feel for the 6.4 percent of you still on dialup and hope you will be able to upgrade soon. “Other” includes a few users on FiOS, wireless, satellite and one person with microwave. 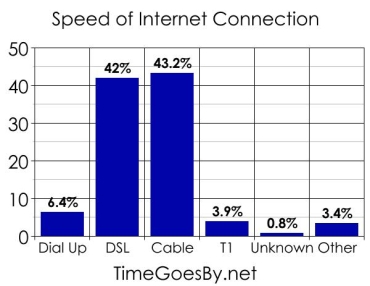 34. How do you spend your personal online time? (388)
Multiple choices here and we’re all doing a lot of different things, although I didn’t list and no one wrote in online sex, which is the most popular search term. Due to so many choices, I’ve split the graphs into three to be more readable, showing activities in descending order of popularity in the survey. 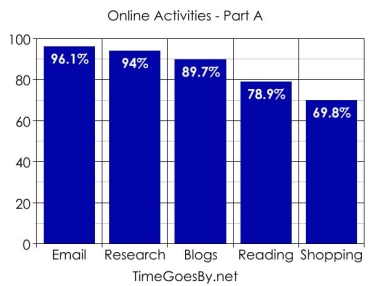 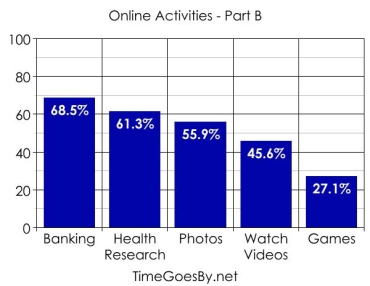 35. What social media do you regularly use? (388)
Multiple choices were possible. It’s hard to define social media these days. Facebook, MySpace and Twitter – which I think of as group grope sites – come to mind first after blogs, but respondents had a wider definition than mine. Many listed membership in special interest groups on Yahoo! and message boards which I’ve folded into chat rooms/forums.

If the labels are too small, they read, left to right: Facebook, MySpace, Twitter, Chat/Forums, Blogs, Sr. Sites, LinkedIn and Other.

Included in "Other" activities with fewer than five responses each: Flickr, YouTube, instant messaging, BlogHer, Second Life and ShoutLife.

One last group of results will be published tomorrow – blogging.

[Continuing the Mother’s Day series this week at The Elder Storytelling Place today, a story titled simply, My Mom.]

It's really difficult to pound all of us round pegs into so many square holes, isn't it? It didn't occur to me to input other means of communication (I'm a ham) or to include the network neighborhoods that I use in my volunteer work (last year I easily put in over 12 hours per week on the organization's computers--using different connections (usually high speed cable, but at times wireless network) from my "at home" setup. The phones that I use in volunteer work, for 2 hours/week, on average, are at times landline, cell, satellite, or VoIP--none of which got reflected. Perhaps you need to give me my own, personalized instruction sheet when you give a quiz--lol.

BTW: Good going on the number of your respondents.

I've been in South Africa for about three weeks (until yesterday), so this is my first chance to see your survey. My main comment is "Very interesting." Thanks for doing this.

Thank you, Ronni, for going to the trouble to do this for us. Quite fascinating, indeed.

I think what surprised me the most was the so dramatic departure from the general populace on the representation of race. I'm always hunting for voices different from mine and perhaps now I know why I have such a hard time finding them. (Not that I don't search equally for those voices similar to my own life and experience.) I know this survey has its limits, but it is nevertheless very interesting. Thank you.
Stella

Did I say thank you for doing this. It's been facinating.

Thanks for doing this survey Ronni. It is fascinating to find out how sophisticated your readers are. Since almost 80% said they have used computers over 10 years I would like to know more. As in over 15, over 20, over 25 years. We bought our first home computer in 1981 or 27 years ago.

Ronni,
I've created/conducted surveys and written reports on them in the past. I know what an enormous amount of work it entails (it's exciting, too, as the stats take shape). This is amazing work you've done! Thanks much.

Isn't it nice to have Marlys back from South Africa?

Ronni & Aenodia--I had meant to comment, yesterday, on the fact that most of us seem to have "learned computers" before we became elders. In my case, I worked with main frame computers as early as 1959 and with PCs as early as 1983. I first had a PC on my own desk in 1985, and purchased my first "portable" (lug-able at 14 pounds) computer in 1989. All told, I've only purchased 3 computers--the lug-able, a laptop, and a tower. The one that I now use at home is a hand-me-down tower. In my volunteer work I use multiple laptops--depending upon my venue of the week.

Being a woman of color, naturally my primary interest was in checking out just how many voices like mine were reflected in your survey. It reminded me of the 2-3 weeks when I first went online 20 years ago -- a time during which I struggled with whether to take luxury of the anonimity I could have by not identifying, and just what that might mean.

I couldn't handle it. It only took that long to realize that -- unless I identified myself racially -- it would be almost impossible for anyone to know to what my words meant. The experience in cyberspace was far more interesting for me and (probably) for those invisible encounters and new friends and debaters I met after I claimed my color and culture.

I wonder, at times, how others like me have chosen to participate and what caused their decision to identify or to not.

Your perspective and comments are interesting! While I'm white, I also wondered about my online persona when I first discovered blogs--should I say exactly who I am? Who might be turned off because of some element of my background, or how I wrote online?

I finally settled on being completely truthful and openly sharing my own true/real perspectives, but not without a lot of thought. Then when hardly anyone responded to my little blogbits, I got discouraged!

I've just forwarded the whole survey results to three diverse professional intercultural friends, and I hope they respond so I can share with everyone.