An Exotic New Home in Midlife

One of the terrific things about the internet is that friends – old and new – are only a keystroke away. Now and then, someone you haven’t seen in a long time turns up - as happened to me a week or so ago.

Not that I haven’t kept track of Joyce Wadler. She is a reporter for The New York Times, is well-known for the “Bold-Faced Names” column she wrote for several years and she now covers a range of eclectic topics such as in this recent piece titled, Peter Rabbit Must Die, which is funny and not-so-funny all at once – a Joyce Wadler specialty.

When we were catching up by telephone, Joyce said that she had been to China last year to visit her friend, Emily Prager, a magazine writer and author of several books who was one of the screenwriters back in 1979, with my old friend, the late Michael O’Donoghue, on Mr. Mike’s Mondo Video.

It’s a small world – more like two, not six, degrees of separation. But none of this is what I’m here to tell you about today which is, instead, a gem of a story filled with fascinating and colorful detail about life in a strange, new place.

Two years ago, Emily moved herself and her daughter from New York City to Shanghai.

“I was annoyed at spending $20 for a hamburger,” she writes, “depressed by designer boutiques on Bleecker Street, weary of the hovering specter of Al Qaeda, and still grieving over the demise of [classics movie theater], the Thalia. I was getting old waiting for the real estate bubble to burst and the city to regain its vibrancy.”

A year ago, Emily wrote about settling into a “lane house” in an area she describes as the Greenwich Village of Shanghai: 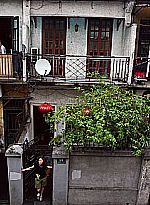 “Each lane is a perfect little ecosystem," Emily explains. "There is a lanekeeper who watches over the lane and a lane sweeper who comes morning and evening to clean it up, to whom I contribute about $5 a month. At the end of each lane is a little house with square windows, which covers garbage bins on one side of a wall and a communal sink on the other.” (Photo: Chang W. Lee/The New York Times)

Emily isn’t entirely new to China. She lived there for awhile as a child and has visited several times since. She adopted her daughter, Lulu, in China and wrote a book, Wuhu Diary, about their visit to Lulu’s home town in southern China when Lulu was five years old.

Nevertheless, it is brave to move halfway around the world into a culture so different from what has been familiar for a lifetime.

Some retirees move to new places when their careers are done, but I think probably not as dramatic a change as Emily has made, and while still raising a child. A good-sized part of me wishes I’d been more adventurous when I left New York City two years ago.

Whether you’re up for something as entirely unlike your life as Emily has done or more an armchair traveler, Settling Down in a City in Motion is fascinating read, and don’t miss the slide show of Emily’s Shanghai lane house.

[At The Elder Storytelling Place today, Nancy Leitz recalls a childhood trauma she calls The War of the Roses.]

My dad (72) moved to Ecuador last November. He'd been researching it for several years and chose that country based on several criteria including climate, strength of the dollar and a vibrant ex-pat community. He loves it. Not sure if he's ever coming back, to tell you the truth.

Thank you for sharing that lovely article. I enjoyed seeing Shanghai through her eyes so much!

I don't think I have her courage, though, at least at this stage of my life. The idea of trips abroad make me wince; the idea of living there, makes me cringe. I am so painfully American-spoiled, I fear. But it is so fascinating to read and learn about it at least.

What an interesting story and slide show. Many times I dream of living very far away; everything very different. I cannot count the times people have told me how much better things are from where I live and breathe. Maybe, just maybe, I would have had the courage years ago. I get pleasure from stories of this type. Thanks from this “armchair traveler.”

But, for me, another country wouldn't be a choice.

There are, however, a gazillion places in the US I would love to explore for possible new living locales:

The higher elevations of New Mexico
perhaps Cloudcroft or Ruidosa

The area around Bluff, Utah, home of my most favorite author, the late Ellen Meloy

To name a few.

Once upon a time I would have preferred an oceanside area, but as I've grown older, the rugged southwest and the mountainous upper northwest are singing my song.

I surely admire and almost envy Joyce for doing this.
I want to do some traveling and still have not worked up the nerve to travel by myself.
Who knows, maybe it will happen.
Thank you for sharing this story.

Thanks for the link to that fascinating article. I would have never thought of wanting to live in Shanghai but it looks like it'd be an intriguing place with a lot of pluses you don't find anywhere in the US. I loved her home there. Wow what a bathtub :)

Loved that entry, Ronni. I lived in Bangkok from 1996-7, teaching ESL and have always loved SE Asia. We have been back there a few times, to Malaysia, China, Thailand, Turkey. In fact, I am talking to my dh about living in SEA for half the year. We would have to move tho, from house to townhouse and have someone look after it for us. This has been my dream since retiring 4 years ago. Live in another country for half the year and Canada the other half. Cool!

Hey, Ronni...Stella gave me an award, and I have to pass it on. I know you've got almost every blogging award out there, so what's one more, right? This one is for art and letters, and/or generally improving the blogosphere. If anyone qualifies, it's you!

Thanks for linking to the "Peter Rabbit Must Die" article. I haven't yet resorted to murdering my local garden-ransackers, but I surely do understand the frustrations of those who have. For now, I spend a lot of money of awful-smelling sprays, which seem to be working. The resident woodchucks, squirrels, and snake, so far, have kept their distance. Could I actually kill one if I felt I had to? I don't think any of us knows what we would do until confronted by such a no-win situation.

Many thanks---it was wonderful to experience how Emily lives.With such positive attitude toward life.------After I retired I lived in Paris for over a year.To the French I was always an American,so I came back.It was a good decision.----Looking forward living outside the US is risky because of health related issues.Medicare does not cover you,and special insurance is costly.---I truly love your blog,hope you have more coverage of retired Americans living abroad.

After sculling on the bay here in Sausalito this morning i was going to hunker down and work yet opened your email to another world and could not stop reading her article. Like several others above I admire her courage and imagination and so enjoyed seeing a city i get to visit in oct. Thank you for this and so many other posts

As an alternative to moving elsewhere, with a hunger for seeign the world through locals' eyes, i am doing home exchanges. So many thoughtful people in the one i joined provide written introductions to their friends, suggest places to go, etc....

as a journalist too, much of my life, it is such a joy to see the world without a deadline at the end of the day.