There is a new survey from JWT Boom and ThirdAge of 1800 baby boomers. One question asked which online activities respondents have “little or no interest in”: 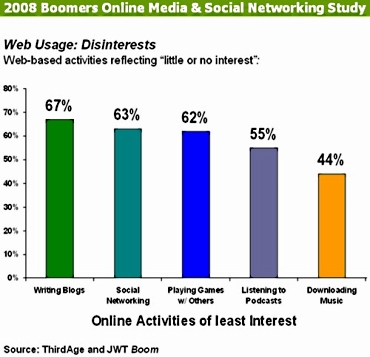 I would have reported these in reverse. For example, I think it’s noteworthy that 33 percent have, presumably, some interest in writing blogs. To me, since I am a strong proponent of blogging particularly for people 50 and older, it is a large and encouraging number.

A difficulty in interpreting surveys of boomers is that the age range – currently 44-62 – covers distinctly different stages of life. The youngest are still raising children and building careers while 55 is the age at which people begin to retire in numbers large enough to count.

Such surveys as this are meant to help marketers determine where to spend their advertising and promotion dollars, but it makes no sense to me to lump 45-year-olds with the 55-plus group. And I would like to know which boomer group – younger or older – has little or no interest in blogging. I’m betting it is the younger ones; they’re too busy.

Another question asked whether boomers visit such social networking sites as “Facebook, MySpace, LinkedIn, etc.” or might in the future. 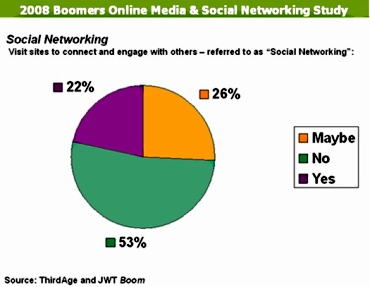 Given that many social networking sites still appeal mostly to teens and 20-somethings, I’m surprised that 48 percent said yes or they might, but I think it’s unfair to mix Facebook and MySpace with LinkedIn which is primarily a business and career networking site. If a respondent ignores Facebook and MySpace, but participates in LinkedIn, what is he or she to answer?

You can find more results at MarketingVox.

[At The Elder Storytelling Place today, William Weatherstone is back with another tale from the open road, Truckers: Then and Now.]

There are other social networking sites out there, such as Open Diary, that appeal to those of us who aren't good with computers. I like getting ten to twenty responses a day. Even my husband reads my OD blog leaving notes that amuse my other readers. Few note my blog on Blogger, and I miss the feedback.

Sorry....I forgot to fill all the blanks in again. No matter how many times I check "remember," it doesn't.

Obviously the survey was meant to reel in some online/site advertising dollars, the hosts wanting to be more broad versus narrow. Seems self-defeating to me, but I am not a marketing guru.

These numbers surprise me somewhat, age brackets notwithstanding.

Now I am curious as to what the respondents did have interests in.

On another note - I haven't visited Third Age in a while, but what's up with all the sex promotion?

JWT BOOM principals recognized long ago that the Boomer and mature market is huge, wealthy, misunderstood and neglected

Like you, I'd like to see more information. For instance, there are more than 1/2 million Facebook users in the US aged 50 and older. While it's a small percentage of the total, it's certainly enough to get an advertiser's attention. Since FB started as a site for students, I would imagine that other social media sites have similar, if not better numbers.

Cool, Ronnie. I agree - you have an entirely different article if you flip the numbers. 1/3 of all boomers have an interest in blogging and more than half download music is news to people...er, young people. Personally, the podcasts surprise me. My prejudice, I think.

I'm past the age mentioned for boomers, but have begun using Facebook and am playing scrabulous with one daughter and one granddaughter. It seems to me that young people today are more interested in using anything other than the telephone to keep in contact, so I find using the internet and Facebook as a wonderful way to keep in touch with grandkids!

I find the stats pretty much accurate. LinkedIn is a different animal when compared to MySpace(case) and Facebook.

The reason I say the stats are more accurate from a marketing standpoint is I read and analyzed quite a few to start a paid newsletter for women 50+ who wanted to start a small business. Even talked to women who said they wanted to start one, and the results were less than stellar.

The stats said 'they talk about wanting to start a business but never take the first step'. Dumb me, I took that with a grain of salt.

Out of 100 women who said they wanted to start a business if they could get step-by-step help to do it, 12 actually took the step and subscribed.

My results may not be the norm, but not all the stats are wrong. Biased maybe but like anything, else we want to look behind the numbers.

I've had a spot on MySpace for a couple years, but my self esteem has taken a beating because nobody stops by.

I am always glad when someone points out that we Boomers span age 44-62...one size does not fit all.
I wish more journalists, financial planners and others would quit with the one-generation, one worldview, approach. So thanks for the good reminder.