Home About Archive Contact
A Few Short Notes on Friday
And When I Die...

The Federal Drug Administration (FDA) has ordered a change in the warning labels on Viagra and similar drugs that treat erectile dysfunction because there have been a (very) few reports of sudden hearing loss in men who use them. There’s an impolite joke hiding somewhere in this story, but I’ll leave it to readers more clever than I am to find. More here.

As Jack Cafferty of CNN points out, Senator John McCain apparently doesn’t understand how Social Security works. Even for a guy who says he’s weak on economics, this seems an extreme piece of ignorance. [1:14 minutes]

Believing, rightly, that the Medicare bill - H.R. 6331, full text here - to be of critical importance, Senator Ted Kennedy, who is being treated for a brain tumor, showed up in the Senate last Wednesday for the revote. It passed in White House veto-proof numbers, 69-30. Presidential candidate, Senator Barack Obama voted yea. His opponent, Senator John McCain, was absent. See how your senators voted.

A new tracking survey shows how dramatically Americans’ access to healthcare has declined since 2003, among the inadequately insured as well as the uninsured. Full report here.

“If commenting on Hillary Clinton's pants suits is sexist, what do we call the guy who waves a sign that shouts "Iron My Shirts"? If it's racist to say that it took President Lyndon Johnson to make Martin Luther King's dream of equality before the law come true, how do we characterize the 3 in 10 Americans who say they would have trouble voting for a black man for president?”

Take a couple of minutes to read 60 and Up author Lillian Rubin’s article on ageism in the presidential campaign. Whether you agree with her or not, it is thoughtful and illuminating.

I don’t know if it’s ageist or not, but I laughed when this cartoon arrived in my inbox. (Hat tip to Darlene Costner of Darlene’s Hodgepodge) 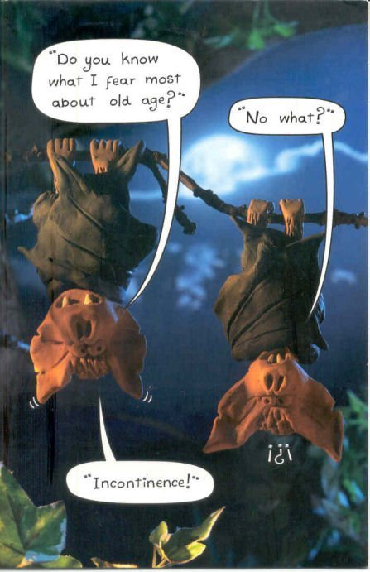 There have been a bunch of reports recently about how much more sex elders are having than in the past which, apparently, accounts for the rise in elder incidence of HIV/AIDS, up 15 percent, reports the Centers for Disease Control. In addition to tragic, this is embarrassing. How can elders - who can legitimately claim experience, if not judgment, over younger people - expect young folks to behave responsibly if we don’t? It’s not like anyone could miss, over the past 25 years, news of the disease and how it is transmitted. More here.

On Thursday, Crabby Old Lady posted a minor, little treatise on breasts. It was meant in fun and silliness, but not received that way by Dr. Ron Evans who blogs on retirement at the Topeka Capital Journal and posted this comment:

“I found this blog to be in poor taste for a public blog. What's next? Digestive processes? Illegal drug use? Sexual fantasy life? I hope this blog does not continue in such a direction.”

Not to push all this boob business beyond the fringe, but I couldn't resist this last-minute item from Suzz at Suzzwords. Hundreds of women in England are protesting higher prices for bra sizes DD and larger - £2 more. That's about $4 US. Read more here.

If anyone doubted it, here’s proof that some things definitely improve with age. Sixty-four-year-old Joni Mitchell’s voice is deeper now, more resonant. This new arrangement of an old favorite is richer, smoother and the passing years have invested the lyrics with a new kind of poignancy. [7:17 minutes]

[At The Elder Storytelling Place today, a couple of reminders.]

That cartoon has got to be the Elder hit of the year! I'll go tell Darlene too.

Scanned Dr. Ron's blog. Now understand book title, "What's the Matter with Kansas?" Topeka could use an old lady blogger with a sense of the absurd in women's lives. Keeps us going in a man's world.

Yes, I looked at Dr. Ron's offerings and understand the book title. I will point out, as the author of the companion piece that Ronni generously mentioned today,I was born and raised in Kansas, but must have gotten over it somehow.

I wandered over to read Gary's reply to your post on boobs, Ronni. It is 'too funny'.

I hope those spoilsports who were so uptight about the subject read it too. Maybe they will be able to lighten up.

Thanks for the link to Open Congress. I will use it. I moved from a state where both Senators voted for HR 6331 to a state where one abstained and the other voted against it. I have my work cut out for me.
In my opinion anything is a topic for a personal blog. Especially the risk of STD's for elders. How about sexual freedom for elders. There was a new piece about a man who moved his father from a retirement facility to prevent his father from having a sexual relationship with another resident.

Dr. Ron Evans may just be a little smarter than we give credit. He got a lot of us to go to his blog and see who wrote such stick-in-the-mud comments about the breast post. His is a good blog and he also said this about Ronni: "...Ms. Bennett and I are on the same page in that we read a lot, think a lot, and write a lot in our blogs. Learning is a better workout for those little gray cells than is producing something to line the bottom of a bird cage." Well from the comments, we can see all the "little gray cells" Ronni got churning over the subject of breasts.

. . . and, BTW, I'm working on the way to cast the article on Viagra and hearing loss, but haven't come up with anything so far. Anyone else have any ideas?

Ronni - such a wonderful rendition of Both Sides Now. I was mesmerized. Thanks so much for sharing!

Well Hooray
I can comment. Cross my fingers and toes. I hope this good news continues.

I did a work around to try the comments again.

Hard to imagine that a 20 year old wrote 'Both Sides Now'... Sure she had a daughter out of marriage, and sure she had to give her up for adoption too. But the insight of this song is beyond the perception of most 40 year olds. Most of her songs fall into that category come to think of it. (The deep voice is a result of 50 years of smoking, not necessarily of age alone. Smoking messes with the vocal cords big time.)

Incidentally, for anyone who didn't know, Little Green, one of Mitchell's earlier songs was about the daughter she gave up. They were reunited a few years ago, by some small miracle. Go read the story, it will lighten your load, and you will smile the rest of the day. Her 'Little Green' (named Kelly) is so very much her daughter.

Mitchell is, whether acknowledged or not, a National Treasure...

Ronni, breasts are a part of who we are and I thought your article was great! (If you're counting votes ;->)

I have Bell's Palsy and enjoy your blog very much. First time I've commented, but have been reading here and there.
Great blog. I enjoy reading it every chance I get and value your opinions!