A week ago today, 108-year-old blogger Olive Riley of Life of Riley died. She was the world’s oldest blogger as this story in the New Zealand Herald acknowledged. When I noted her death here last week, Granny Annie of Fools Rush In suggested that I might like to take on another project – a memorial to elderbloggers we’ve come to know and love who are no longer with us.

It is such a good idea that I did it. It’s not elaborate, but a permanent place to keep the names and home pages of bloggers we miss in a place where we won’t forget them. It has a link off the right sidebar titled In Memoriam. (Hat tip to Mike Nichols of Anxiety, Panic & Health for the NZT story.)

There is no dearth of information about the benefits of walking for elders, but a new study from the University of Georgia shows that it cuts the risk of elder disability nearly in half and puts some eye-popping hard numbers to it:

The study was conducted only with men, but I have no doubt that women benefit too. So get out your quarterstaffs and get moving.

General Motors researchers are developing a futuristic windshield designed to help elder drivers see more clearly what’s happening on the road. It involves lasers, infrared sensors and cameras to make objects on the road stand out. But as in this photo that projects a blue line along the edge of the road in fog, it will be a boon to drivers of any age. Read more here. 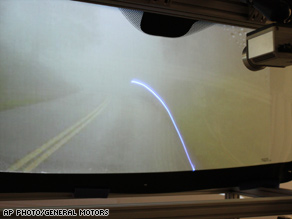 It was good news a week ago when Congress voted to override President Bush’s veto of the Medicare bill that would have cut physician’s pay and probably pushed more doctors into refusing to take on new Medicare patients. But there are other important changes too. The National Committee to Preserve Social Security and Medicare has posted a list of them, translated from the bureaucratic gobblydegook of the bill itself.

Sometimes you just have to wonder what gets into people’s heads. The Gilbert Guide is probably the definitive website for hard information on all aspects of late life caregiving yet I hardly ever visit the site even though I subscribe to the email newsletter.

This week, I realized why: I can’t read the email newsletter due to the elder-unfriendly design of orange text on a blue background. I wonder how many other subscribers there are who, like me, never bother to click to the site because they can't see the headlines.

Many years ago when a friend was diagnosed with breast cancer, she spent several weeks researching the disease and potential treatments before making a decision. Even though she was a reporter herself, because it was a time of high anxiety for her, she had a friend accompany her to interviews with physicians and researchers to take accurate notes.

A new study reveals that a third of 65-plus Medicare patients do this and the result is a higher level of satisfaction in the quality of care. The companion could be a spouse, adult child or a friend. We should all keep this in mind for ourselves and our elder parents.

There was lot of comment pro and con regarding my dissatisfaction with the New Yorker cover this week featuring Michelle and Barack Obama. I have one final thought before we permanently put this issue to bed: Mad Magazine has never had any trouble making their satire clear, nor The Onion, and to a widely diverse readership including children. Shouldn’t satire be apparent to be worthy of the name?

Here is how satire is supposed to work in a video clip from Jon Stewart. You can disagree with the politics and even with the level of humor, but you won’t miss the point. [7:53 minutes]

My maternal grandmother had her mental faculties when she died at age 99 but she could barely walk. My mother, died last year at age 92, with her mental faculties but she could barely walk and used a power chair. Both of these women worked hard all their lives but they did not do any aerobic exercise, walking, swimming, biking. I am hopeful that walking (with my quaraterstaff) and riding my exercise bike religiously will help me avoid the loss of my ability to stay upright to my final hours. If I manage that, you can put it in my memorial on the sidebar:-)

RE: Gilber Guide - and how about if you're colorblind?!

You just 'gotta' love that John Stewart. He knows how to make the point with humor. The editorial staff of the New Yorker should have watched him for a week before publishing their misleading cover.

Orange on blue is not 'elder' (your word) unfriendly.

You have got to quit thinking that the world is out to get you, Ronni.

"Sometimes a cigar is just a cigar." --Sigmund Freud

"Never assume malice when stupidity will suffice." --most likely Heinlein.

@Anonymous: Ronni has written extensively about elder-friendly web design. And, indeed, much of it is just good sense. I constantly had her suggestions in mind while designing my own blog.

But I hardly think that she is paranoid, as you imply. She's just pointing out that the newsletter of a premier site about aging is so unfriendly to older eyes that it is virtually unusable by its intended audience.

The Gilbert Guide comes in fine for me - on a white background. Try using Firefox as your browser instead of IE or check your display settings in IE.

Thanks for the new page and all the news that gets us moving too.

Thanks for another good reminder about the value of walking AND a great clip from Jon Stewart. Laughing is right up there with walking when it comes to staying healthy.

There seems to be some misunderstanding. As the item about Gilbert Guide states, I'm talking about their newsletter, which arrives via email, not the website.

Over at the site for those of us trying to be regular movers, http://elderexercise.wordpress.com, your statistic appeared. It's been so important for me to realize that it's never too late to become an addict--to a pedometer.

Side effects: work off rage against the machine and politicians.

Sorry didn't know that I was being so 'iconoclastic'.

Orange on blue is NOT 'elder' unfriendly

IT IS POOR WEB DESIGN.

But I take your point. One doesn't criticize the queen.

"It was good news a week ago when Congress voted to override President Bush’s veto of the Medicare bill that would have cut physician’s pay and probably pushed more doctors into refusing to take on new Medicare patients."

That is a HUGE problem. In one of the areas I serve (as an insurance agent), some of the Dr's are dropping from their Medicare Advantage plans in mid-stream.

The beneficiaries are locked into the program, but the Dr's can leave (refuse treatment) whenever they want???? How does that make sense?