Home About Archive Contact
Gay and Gray: The Book
The Other Election

Do you wonder what the Iraq War is costing you? Personally? Progressive Future just posted its Invest in U.S. Calculator. Enter your 2007 income to see how much of it went for the war and what it otherwise could have paid for.

The New Yorker took a drubbing from far and wide two weeks ago, including here, about its “satirical” cover art of Senator and Michelle Obama. Lee Siegel of The New York Times best illuminated why the cover is offensive:

"In satire, absurdity achieves its rationality through moral perspective — or it remains simply incoherent or malign absurdity. The New Yorker represented the right-wing caricature of the Obamas while making the fatal error of not also caricaturing the right wing...

"By presenting a mad or contemptible partisan sentiment as a mainstream one, by accurately reproducing it and by neglecting to position the target of a slur — the Obamas — in relation to the producers of the slur, The New Yorker seems to have unwittingly reiterated the misconception it meant to lampoon."

I wish I'd said that. Still, it seems churlish after all the hoo-haw not to point out this week’s cover that returns to the classic wit the magazine is known for. 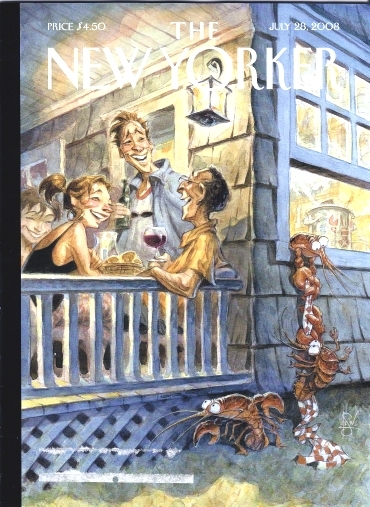 The Social Security Administration launched a redesign of its website last Monday. It’s more attractive, easier to read and navigate and most important for people not yet retired, there is a new, more accurate benefits calculator. It is based on your actual earnings with adjustment for future earnings projections and inflation. Check it out here.

January will not be too soon to be rid of this toxic White House administration. It’s not enough to have ruined the economy, conducted unnecessary wars and ripped Constitutional guarantees out from under us. Now they are trying to rush through a new "secret" rule experts say will make it harder for the federal government to regulate workplace exposure to chemicals and toxins. Read more at the Washington Post and ProPublica and a follow-up here.

As sex saturated as our culture is, the subject of elder sex is still taboo or, at best, snickered at. But the octogenarians in this human sexuality class have no such reticence. Their questions and comments probably wouldn’t make the cut for network or even cable news (consider that a content warning). Dr. Myrtle White, medical director of A Woman’s Touch Sexuality Resources, who teaches the popular class, says she gives these elders the same information as is taught in her nursing classes. [3:56 minutes]

While we’re talking about the functions of old bodies, new research has found that liver transplants from old donors are just as effective as those from young donors.

You can read more here, and you might want to update your end-of-life documents to offer your own liver to save a life.

Illegible physician handwriting causes 1.5 million drug errors and adverse reactions in patients every year. So beginning in 2009, Medicare will pay bonuses to doctors who use e-prescriptions. Read more here.

After mounting coverage that rivaled the Berlin Airlift itself, the media has been bashing Senator Barack Obama’s Berlin speech as too high-falutin’ without enough detail. The far left has attacked it for embracing the war on terror and Senator John McCain has been whining that Senator Obama is a Johnny-come-lately to world travel after having attacked him for not visiting Iraq and Afghanistan.

Oy, the head spins. The better idea is to skip the pundits and decide for yourself. Here’s is the Berlin speech in its entirety. Or, full text is here if you’d rather read it. [26:19 minutes]

After a month of one factual gaffe after another by John McCain, a discussion of his age in relation to his capability for high office is not unreasonable. But that’s not what the late-night comedians joke about. Instead, they spew forth such one-liners as, “He remembers Iraq when it was called Mesopotamia,” and Gerald D. Skoning of the Chicago Tribune is giving them what-for.

“I think it's time for all Americans - pundits, comedians and the vast electorate alike - to get off the age-bashing bandwagon and focus attention on the urgent issues facing our nation.”

In May, Irvine Robbins died at age 90. Never heard of him? He was one-half of Baskin-Robbins, and Julia Reed at Newsweek marked his death with a short history of ice cream. Did you know that Thomas Jefferson installed an icehouse at the White House so he could have ice cream year round? There are more tidbits here.

Kay Dennison of Kay’s Thinking Cap recently bought a quarterstaff. Here’s how she reported her purchase:

“I was delighted when I and my tired legs found a lovely young artisan who makes excellent quarterstaffs of all types of wood…I told him about the Quarterstaff Revolution and he thought it wonderful. When I mentioned that canes signified infirmity, he interjected, "but quarterstaffs denote power." What a great young man!!!”

Have you sent in your picture for the Quarterstaff Revolution?

Before the media got to bashing Barack's Berlin speech, they warned of the potential, on his world jaunt, for faux pas, gaffes, mistakes, missteps, pitfalls and revealing an Achilles' heel which gave Jon Stewart more good material than Senator McCain's real errors. [5:30 minutes] (Hat tip to Darlene Costner of Darlene's Hodgepodge)

Speaking of bonuses to doctors, I think this news out of the UK is scary. “Surgeons to be given bonuses for saving lives - NHS surgeons are to be paid bonuses based on the number of lives they save, in radical plans being drawn up by hospitals across Britain.”

At first, it sounds great. But, to start with, there’s this: “Leading surgeons said that this could deter doctors from taking on higher-risk patients, such as the frail and elderly, and from carrying out complex operations.”

Those two videos were great--I really enjoy your Saturday Elder News. Also, one of your posts in which you mention geriatric care managers renewed my interest--and am now starting courses towards a certificate in GCM--thanks!

I worked in a Pharmacy for 11 years and can attest to the fact that Doctors are very careless in the writing of prescriptions.

There was a "House Organ" that we subscribed to and every month they printed an actual Rx that a physician had written. It was a contest. You received a prize if you could correctly read the name of the drug,the strength and the directions for taking.

There were 4 pharmacists in our store and never once were we able to read the Rx and enter the contest and we were always surprised the next month when they printed the answer.We would never have guessed!

We spent a lot of time on calls to doctors to ask them to decipher their scripts. They were usually angry with US about the inconvenience...

Obama was a success over here. Journalists loved him. Ordinary people have loved him for a long time. Not sure that Sarkozy's compliments will bring him anything though!
And the French loved Kerry when he came over and that didn't bring him luck. Hope his visit abroad doesn't hurt Obama's prospects.

Forgot to mention that "Illegible physician handwriting" was quite international. Pharmacists have to "translate". I remember once, one pharmacist asking me if I suffered from a kidney disease on reading the doctor's prescription. When I said that I didn't, as far as I knew, he called the doctor to find out what it was!
Crazy!