I’m skeptical of all drugs and remedies that purport to relieve us of healthy behavior – like eating well and exercising.

But exercise is my bete noir, so I quickly latched on to this story about the development of a drug that tricks muscles into “thinking they have been working out furiously.” So far it’s been tested only with mice, and skepticism notwithstanding, it can’t arrive for humans too soon for me.

According to Christopher Beam of Slate, Clinton pollster Mark Penn has identified this election’s new swing voters (what were soccer moms in 2000 and 2004): “active grannies” or, in other words, old people.

Even though Beam dismisses these voters as a “cute new group, Penn points out that it

“…has apparently chosen every president (or at least every winner of the popular vote) for the past 40 years.”

It pissed me off when I read of a report stating overweight and obese elders contribute from $15,000 to $26,000 each in additional expenses to U.S. health care system. That may be true, but it implies that younger overweight/obese people do not cost the system – probably much more, since they will live longer. I wonder who authorized a study targeting only elders on a health issue that affects people of every age.

One of the interests many TGB readers have in common is a love of books and reading. Here’s a treat: a large collection of photographs of spectacularly beautiful libraries from around the world. This is the Biblioteca Palafoxiana in Puebla, Mexico. Many more here. Personal Consumer Note: There as a lot of painting I had intended to do over a couple of weeks – the frames around the 17 windows in the house – so I was pleased to find Scotch-Blue™ Painters tape.

The TV commercials and website promise that the tape “removes cleanly” if left on no longer than 14 days. Beware! It worked fine with the first four windows and then pulled the paint off the wall around the fifth frame – even thought the tape was removed within 24 hours. Now I have to repaint that entire room (thanks, Scotch) and I’ll go back to old-fashioned masking tape for the rest of the windows. It’s always worked for me in the past.

Nearly one million hip and knee replacement surgeries were performed in the U.S. last year. Some patients reported agonizing pain following the surgery. The U.S., unlike many other countries, does not keep a national joint registry to track the progress of joint replacements which delayed by a year discovering the cause of the patients’ pain - a defective part of one manufacturer's artificial joint. Read more here.

The International Longevity Center (ILCUSA) reports on a study revealing that ageism is now the No. 1 form of workplace discrimination in the United States. Washington Post health columnist Abigail Trafford discusses the issue of age stereotypes in a Q&A with Becca Levy of Yale University who studies the effects of age stereotyping on health. Says Levy:

“…accepting aging (and even "getting ready to go" or one's mortality) is a good thing. But ageism, on the other hand, should be met with kicks and screams.”

When Pete Sampson of As I Was Saying… sent me this Granny Letter, he said, “I don’t care if it is a hoax.” Me neither. 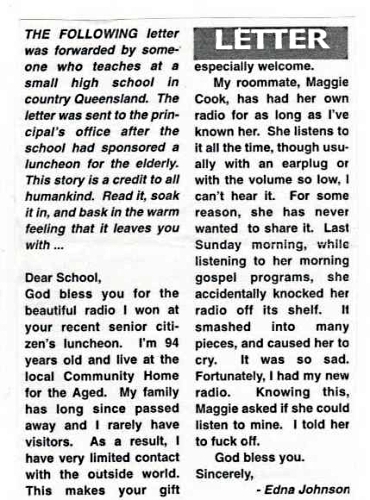 The nominees for the Excellence in Storytelling Award have been announced at The Elder Storytelling Place. The poll is open until next Thursday, 7 August. Please do vote.

Re: age stereotypes. At a library conference yesterday, a speaker was discussing technology and the "evolving library" - how reach your user by incorporating some of the many technolgical bells and whistles that exist today. I was sitting next to a young woman in her 20's, I would guess, someone who recently earned her MLS. She wanted to know how to convince the "older" librarians that these newfangled things like podcasts, etc. would really work (although she quickly changed her adjective to "more established".) I looked around the room and at least half the people there were, I would guess, 50 and over. Most were somewhere between 30-50, and fewer were in their 20's. "Older", or excuse me, "more established" librarians dominated every workshop I attended, and they were taking notes furiously, asking questions, and clearly involved in the incorporation of the various technologies that were being discussed. If I'm not familiar with certain technologies, it's not because I'm afraid of it or opposed to it.

Though not sure how to generalize about this, I'm concerned about twenty-somethings similar to the one Deborah described in her comment.

Yesterday I had an unsettling exchange with a smart, college-educated 24 year old. I was wearing my largest Obama button. She said "not decided yet." Fifty-something with us said, "You're not going to vote for McCain!"

No, she answered, "I just haven't decided yet." She assured us that she planned to vote. Decided, though I'd thought otherwise, I do not know her nor her generation. They are a very disenchanted group, feel left behind in an economy where their boat has not risen.

As I watched the news on the exercise pill I decided that I would volunteer for a trial. I would make a good test case. ;)

Bravo for speaking up on the study of how much obesity in seniors costs us. Indeed, obesity all across the age range costs us all money. It's one of the "bigger" public health crises we have out there.

If the Scotch blue tape pulled paint off your wall, somebody did a lousy job of priming the wall in the first place. Here's a guess (I'd bet money on it...). Somebody at some point painted the window with high gloss paint and was sloppy when painting the edges. That's a common way to paint windows anyway. Paint them first, then paint the walls, as any sloppiness around the windows will be hidden by the moulding.

High gloss paint will not accept another layer of paint without first being scuffed up.

Well, that's a possibility anyway.
But if the blue tape pulled off your paint, masking will make it even worse.