There is no getting around it – one of the things involved with “what it’s really like to get old” is that it becomes more likely bad things will happen with our own health and/or the health of people we know and love.

Recently, one of our own elderbloggers, Pete Sampson of As I Was Saying… who lives here in Portland, Maine, was confronted with that reality when his wife Marge was diagnosed with ovarian cancer. As Pete posted to his blog on 27 September:

“I felt as if I’d been slapped. In fact, I actually tried to get a look at the name on the case file the doctor had open while he was talking to us because I was convinced there was some mistake. Surely the message he was giving us was intended for someone else. But no luck on that one.

“The cancer is apparently already advanced, and there may be several tumors. The next step is surgery, perhaps on September 30th, a week from today, but we don’t have a confirmed date for it. We’ll meet with the doctor again on Friday for more information about the surgery and the overall treatment strategy.”

The surgery took place as scheduled. By then, Pete had moved his blogging pretty much full time to CaringBridge, a free, non-profit web service that provides space for friends and family to connect during times of critical illness, treatment and recovery. At the end of the day of Marge’s surgery, an exhausted Pete posted this:

“Basically, the surgical result was the best we could have hoped for. The surgery itself was long (more than six hours!) and my initial understanding is that the situation was nastier to start with than the surgeon had been anticipating. Marge's condition seems to have been much, much more perilous than we knew - so much so, in fact, that a simple fall on the stairs or a blow to the abdomen could have been fatal!”

Marge left the hospital for home last Thursday, 9 October. By Sunday, the many visitors and phone calls prompted this response from Pete on his CaringBridge blog:

“My new role, I think, is that of bad cop. Marge did a lot more than she should have today, and she even fooled me about how much energy she had. She looks so much herself that we've all assumed she was a lot stronger than she probably actually is.

“This evening I said to her, ‘If you were a little kid, I'd tell you when and what you were going to eat, when you'd had enough company, and when it was time to rest.’

“’Well,’ she said, ‘maybe you better start treating me like a little kid.’

“I pointed to the half empty glass beside her. ‘In that case,’ I said, ‘you better drink your milk.’

“And now it's time for me to put the baby to bed.”

The blogosphere – and the elder blogosphere in particular – is a remarkably caring place. We have often discussed how close and important our online friends become and when bad things happen, our community has always jumped in with all the support it has in it collective heart - no less so than with those we know in person, just at a distance of the keyboard.

Sometimes, however, we are reluctant to let our blog friends know when bad things happen. But it is better, I think, to reach out as Pete has done. It keeps caring friends close and I suspect the writing helps Pete too.

It is a relief that Marge is home and doing well. Here’s a photo of her toward the end of her hospital stay that Pete posted on his CaringBridge site - where you can leave messages under the “guestbook” link at the top of the page. 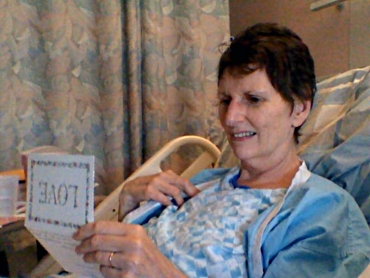 I just signed the guest book for Marge on Pete's Caring Bridge site. So many have already signed the book that it proves how supportive and caring our blog friends are. I know that so many loving wishes surely must have healing power.

We hope for a full recovery for Marge and strength for Pete.

I totally agree with what you said. I began my other blog "Joy's Updates" in 2002 when I had lyphoma to let people know how I was doing. There was a time that my son had to take over for me and posted for a couple of weeks. It was helpful in so many ways to blog. It gave me a connection with friends, family, co-workers, and others. They got the information from me "Straight from the Horse's Mouth" which is the rest of the title of that blog. They emailed me and commented which helped all of us so much. I'm so glad I did it and am delighted to be in the blogging community.

I thought I proofread. I'm a retired English teacher! Sheesh!

Thanks, Ronni! A few of your readers have left messages for us on the Caringbridge page, and we appreciate it.

As of this morning, our Guestbook contains 222 messages from all over the U.S. There is also an entry from India and one from Australia.

Some people believe that the kind of love and support we continue to receive can actually change medical outcomes. I don't go that far myself, but I can say that prayers, love, support and simple acts of kindness keep us focused and hopeful. As a result, what we experience to a surprising extent is calmly optimistic serenity.

We don't have to proclaim anything beyond that in order to have a richer, more meaningful day today.