Home About Archive Contact
Ronni Returns with Some New Elderblogs
This Week in Elder News: 31 January 2009

Bill, who blogs at prairiepoint, emailed to ask how it’s going with my new mini-laptop, the Asus Eee pc 900HA netbook. 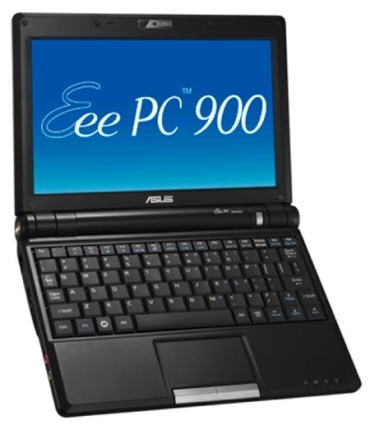 [More photos at my first story about this netbook]

I’ve had it for about a month now and the overall answer is that I love it – with a couple of reservations.

A standard laptop keyboard measures about 11 inches by 5 inches. In contrast, the netbook keyboard is only 8.5 inches by 3.5 inches, a considerable difference. Bill asked in particular whether I can touch-type or if I use two fingers.

That answer is: both.

Generally, I can touch-type, although when I’m moving fast – trying to keep up with my thoughts – I hit a lot of wrong keys. So I have developed a hybrid of the two styles of typing. One useful solution (mostly for women) is to keep your nails well trimmed. When they are even the tiniest bit longer than the ends of my fingers, the nails catch on the key above what I’m aiming for.

There is what I consider one major design flaw: in shrinking the keyboard, Asus placed the Uparrow key between the Question mark/Slash key and the right-hand Shift key.

On full-size keyboards, they are next to one another so I have trouble remembering to reach farther to the right to shift with my little finger on this mini-machine. Really irritating and because one uses the Shift key much more frequently than the Uparrow key, it is a big-time mistake that would have been a deal breaker for me if I had known.

There are many other netbook manufacturers and I suggest you check the location of frequently-used keys before you make a purchase.

Also, there is no CD/DVD drive so you will need an exterior drive if you intend to load programs from CDs or want to view DVDs on a netbook. I don't watch DVDs on a computer and I solved the CD difficulty by switching to free programs I can download such as OpenOffice to replace Microsoft Office that I have on my full-sized laptop.

With those caveats, the netbook is a delight. Unless you play video games, edit video or music or keep a lot of those kinds of files on your computer, the 160GB hard drive is more than enough storage and if you need more, Asus provides an additional 10GB of online storage (free for 18 months) which can be accessed from other computers and shared, with a password, with friends, relatives, colleagues, whomever. I don’t know if other manufacturers supply this feature.

And the 1GB memory makes the netbook as speedy as I need for writing and image work. The smaller screen, which is much brighter than my full-size laptop, hasn’t bothered me either. I can read it easily.

With my full-sized laptop, I’ve never been able to work online when I’m outside on the deck. Whatever controls the range of my in-house network won’t reach that far. But it will on the netbook with as strong a signal as at my desk.

There is more detailed information at Amazon where I bought mine and where it is already nine dollars cheaper than what I spent 30 days ago.

So far, I mostly I use the netbook for email, surfing and writing when I'm at the kitchen counter (good, too, for having recipes where I need them without needing a printout) and in the bedroom where I like to surf and answer email while I watch television there.

I’ve also taken it with me to restaurants where I can continue to work while having lunch, but its greatest value is going to be when I travel. No more extra bag just for the computer and accoutrements and at a weight of just over two pounds, I hardly know it’s in my handbag.

The inconvenience of a much smaller keyboard, while small, is just enough that I wouldn't want a netbook to be my only computer (although if it were all I had, I would undoubtedly adapt without much difficulty). But for its mobility, sturdiness, battery life of five hours and miniscule weight - not to mention price - it is a valuable tool.

I know that Frank Paynter of listics and Saul Friedman who is the Reflections columnist here at TGB each bought one as well as a couple of other readers. It would be good to read their experience with the netbook too.

Ronni, I bought the Asus eeePC 901 to take with me last fall when I went to China and Japan. I also found the placement of the shift key annoying. On the whole it was great, but I have two other complaints: my battery is supposed to last 7 hours; it only lasts about 5, so I'm carrying extra weight for nothing. Also some of the keys will double strike, like thiss. I complained, they answered, it didn't help. I plan to complain again.

This was not my first choice of netbook, but it was the only one available in August when I needed it.

I think I would have to try typing on the keyboard before I purchased one. I'm not sure my fingers would adjust to a smaller keyboard.

thanks for this info. i looked at the ASUS offerings at Best Buy the other day, but the clerk didn't know anything about them. i'll go back and check out the shift key arrangement, see if it looks too daunting.

Can you watch QuickTime movies on it?

Thanks for the update, Ronni. This answers a big question for me, which is, would I still like it after the cuteness factor wears off.

Sure, I can watch Quicktime movies on it. It does anything a normal computer does. The only real difference is physical size.

I wondered, too, if I would use it after the initial thrill wore off and the answer is I use it almost every day when I want a computer somewhere else in the house besides my desk. My Lenovo has just way too many cables plugged into it to move around and, as I mentioned, the network isn't powerful enough on the Lenovo to reach as far as I want.

Yup. I got mine a few days after Ronni got hers, and have had largely the same experience. The keyboard is a little too small, but big enough for what it's for.

It has a USB port so I don't think I'll miss the CD/DVD drive, and as Ronni points out, you can download what you need from the net.

I like it because my laptop is too big to schlep around. For me, the laptop is a portable desktop. The netbook is handy, about the size of a small hard cover book. It has plenty of battery (five or more hours) and it charges fast. I like to use it at the breakfast table to read the morning news.

Back to the keyboard. The layout is a little different from what I'm used to, but I'm a three or four finger typist and I figure I'll adapt.

I want to reiterate how annoying the placement of the right Shift key is.

For the first couple of days I was playing with the machine, the screen scrolled up on its own for no apparent reason - until I realized I was hitting that Uparrow key that's so poorly placed instead of the Shift key. And even though I'm excruciatingly aware of the problem now, it still happens a lot.

It is beyond my comprehension how the designers could have made such a terrible decision, and as I said above, had I known, I would not have bought the machine.

I'll eventually become accustomed to it, but it makes it worse for me that it is so obviously a dumb idea that professional designers should have caught and fixed before production.

I see what you are talking about Ronni....

I was looking at a larger image of the keyboard. It would appear they were trying to maintain the ‘arrow keys’ in their normal computer keyboard configuration, thus opting to move the ‘shift' key to the far right. Seems much more logical to me for the designers to have moved the ‘up arrow’ key to the far right in lieu of the 'shift' key. Especially since the ‘up arrow’ key on your typical computer keyboard is not a normal reach key with the hands in a standard typing position where as the 'shift' key is!

Well, I'm not a right shift key user! I can see how the up arrow/right shift thing would be annoying for a touch typist, but I almost always use the left shift. This keyboard is a heckuva lot easier to use than the thumb typing qwerty keyboards on PDAs... as it should be, I guess.

I wasn't responding your your post which showed up right after I posted mine about that damned Shift key.

But I'm glad you mentioned the Asus keyboard versus the thumb typing - not for me in my lifetime.

Ronnie I didn't get the AUSUS instead I got something a little larger a 12" HP 2510 Tablet. I love everything about it. It is more powerful than the AUSUS or other mini-laptop or netbook. It is a lot more expensive, but I wouldn't trade it. It is almost as portable as the netbooks but has the swivel screen and cd disk drive. It is - I think a nice cross between the mini and a full sized laptop. I sure that I will not buy another full sized laptop, but if I am going to be a long time on the screen, I might setup an external monitor.
Harold

I really appreciate this tech info to consider for any possible future netbooks I might want to purchase. You need to add a special segment so users can provide information periodically. Then when I get ready to buy, I can come here to see what's current, or ask questions to which some might respond. I really like the blogger input here as being practical, realistic and worthwhile.