Probably, if we each live long enough, the time will come when we will be too frail or fuzzy to drive. There is an excellent story in the Omaha World-Herald including good suggestions about helping an elder parent turn in his or her keys when necessary.

However, way too much has been made in the press recent years about elder driving accidents, as though they are the only ones who endanger others. As this graphic from the story shows, elder drivers have far fewer accidents per capita than any other age group. That’s not to say, elder who become incapacitated shouldn’t be denied a drivers license – just that I don't like them being singled out. Marian Van Eyk McCain of The Elderwoman Website is the author of a story at Ooffoo titled Micro-Yoga for the Busy Woman – eight mini-exercises you can fit into stray moments of your day to help keep you healthy and reduce stress.

The first annual International Film Festival on Aging is being held in the San Francisco Bay Area from 20 February to 22 February. Sponsors, Pacific Institute and AgeSong Senior Communities say, the “film series illustrates the value of our Elders while challenging society's archaic preconceptions about growing older.” I wish I could be there, but 3,000 miles is a long way to go. Perhaps some Bay Area TGB readers could attend some screenings and fill us in.

Although I've wised up and no longer own a bathroom scale, there were decades of my life during which I was obsessive about weighing myself several times a day. I wish I had known then “The Proper Way to Weigh Yourself” which came to me from a Connecticut friend via his sister, Jo Ann Weisel in Ashland, Oregon. 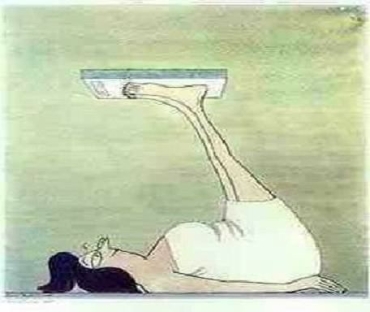 Have you made your funeral plans? According to this story, baby boomers aren’t going to settle for a plain box in the ground or ashes on their children’s mantle. They want to turn those ashes into a diamond. Yes, that can be done. Information on that and other “creative” afterlife solutions are here.

As Washington takes on the economic stimulus package, I’ve become disturbed at the increasing number of news stories, editorials and other commentary – such as this Madoff cartoon (hat tip to Kent McKamy of Kent’s US Drive) – attacking Social Security. 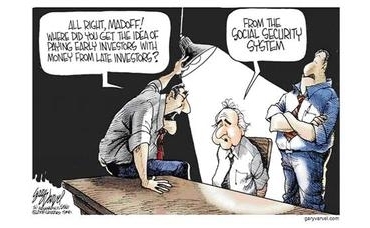 The National Association to Preserve Social Security and Medicare takes on the anti-Social Security trend in this story pointing out some of the factual errors reported by so-called responsible journalists.

Two Washington Post contributors took on the arrogant, Marie Antoinette impersonators in Wall Street executive offices this week. Eugene Robinson tries to explain to them that their day is over and Harold Meyerson offers up a solution to curb outrageous executive pay that, in some cases, he reports, amounted to 10 percent of their companies’ earnings. Good, substantial reading.

According to a new study, 78 percent of U.S. senior households lack the financial security to see them through their late years. The researchers outline five necessary actions needed to be taken by the Obama administration to help today’s elders and younger generations ensure their economic stability. Details of the study here.

I have been charmed by the television commercials for a new animated film titled Coraline which opened around the U.S. yesterday. There is a nice slide show here with a bit of insider explanation about it from the director, Henry Selick. And here is one of the trailers. [2:26 minutes]

I read on your paper's web-site this morning that Coraline is not a movie for children, even though a child is the main character.

Is there a link for "The Proper Way to Weigh Yourself?"

No link, kenju - just the cartoon.

Other than Helen Thomas are there any responsible Journalists left?

Yes, older drivers are still responsible for a lower rate of fatalities than are teens (and there is a much longer range of ages included in "older" than in "teen"!) One datum not usually mentioned is the high proportion that older drivers, themselves, constitute in their fatalities. Teens are more apt to take friends/family members/strangers with them when they go (or even when they don't "go").

I thought that any knitters who read this might like to take a look at the website of Althea Crone, who made the miniature sweaters worn by Coraline.

I found her on the the blog of Vicki Howell, in whose new book, Craft Corps, I will be appearing.

(I hope I got these links right. I follwed the Elder Geek tutorial.

Interesting how much lower the female driver traffic fatality rates are; I suppose men (my hubby included) would argue that fewer women drive after a certain age. They let the men do the driving.