“While we're at it, what about the advertising?! I don't mind that I get targeted for anti-wrinkle cream and various health care devices as much as I mind how bad the ads are: boring and uninventive.”

Mary is right. Whether television commercials or print ads, the concepts and production values are awful. Unlike Mary, however, I object mainly because they perpetuate the cultural imperative to appear young until the day we die. They say to everyone that youth is the gold standard of life and that aging is unacceptable.

The company that produces whatever this product is has been spending a lot of money for online ads recently. It turns up on almost every email newsletter I get and news website I read: 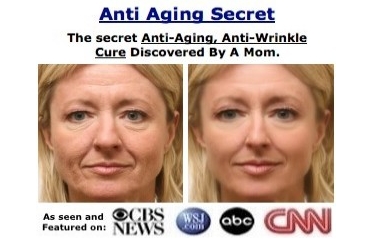 In addition to being repellent for its message, the ad is a fraud. At first glance, it looks like the lighting is harsher in the “before” photo and the “after” photo has been shot in soft focus. Look again and you can see they are the same photograph; the "after" image has been Photoshopped.

Companies - especially wrinkle cream companies - are so confident people will spend money to look young, they don't even bother with a real testimonial. And as the ad is bogus, it follows that the product is.

More than the obviously fraudulent, however, I object to the focus of all advertising targeting elders for the near one hundred percent concentration on disability and ill health (of which, apparently, wrinkles and sags are included): arthritis, osteoporosis, medical alert systems, scooters, life insurance all feature old people, usually only old people. No wonder everyone believes that to get old is to be sick.

Some old people need these products. So do some young people. The person I see regularly on a scooter in my neighborhood is about 30.

But the greater disservice, I think, is that old people are missing from other kinds of ads and commercials. Do advertisers think we don't buy pet food, cleaning products, breakfast cereal, cell phones, cars, airline tickets? And you'd think elders would be the obvious target for those Dr. Scholl's gel inserts for shoes.

The reason we don't see elders in any but health-related commercials, I suspect (in addition to the fact that ad agencies are staffed almost exclusively with people younger than 40), is that advertisers believe younger people won't buy products that are sold by old people. They are as much brainwashed by perpetual media age bias as they are the brainwashers.

As advertisers know better than anyone, repetition works. So when only young people are shown using the ordinary products of life and we see only old people using health-related products, what is the message? You tell me.

I'm with you there, on all points. Although, as a boomer age person, I'm not too crazy about the other extreme, found mostly in ads for retirement plans, insisting that we're all so young and vital we're going to reinvent retirement. Most of the people I know who are my age are feeling their age to varying extents just like every other generation ever has and the way we intend to reinvent retirement is by not being able to afford it.

I think the anti-aging secret is Photoshop, not some face cream.

And just because repetition works in perpetuating the current stereotypes, without thinking (unless we get prompted--like today), we fall for it, not realizing the power of the self-fullfilling prophecy.

Re: Zenyenta's comments. How true. Every time I see a "young" older couple cavorting in an exotic setting, I wonder, what have I done wrong?

It happens every couple weeks. My mom gets a phone call asking if she's made her (funeral) plans yet. Mom LOATHES these calls, and tells the telemarketer to take her name off the list, but noooo. Seems like when you are over 50, you are being pushed slowly off the stage, as if the world doesn't need you any more.
But the over 50's are the ones holding the most $$$. There is a huge market for clothing, housing, everything an over 50 needs....why don't we see that?
Every one of those ads for scooters, funeral arrangements, senior living is a subtle reminder that we need to pack our bags-in other words, circling the bowl.

I always think that in ads like that, they take an "after" photo and photoshop it to make the person look older and use it for the "before".

I'm flattered that you found my observation worth sharing, Ronni!

I agree with Kenju! You seldom see an older person being used as a model. Heaven forbid they hire anyone over 30 at ad agency.

No, they take a young person and make them look their own age as the after picture and Photoshop the before picture to give them all those wrinkles and baggy eyes...

Good discussion this morning. I've never paid much attention to these sorts of before/after ads. I am sure now that they are photoshopped, but how can one definitively tell that a pic has been photoshopped?

There was a letter to Annie's Mailbox today in our local paper from an "over 50" who laments the lack of fashionable clothing for boomers. She mentions that she has money for clothes. Why doesn't the market provide her with what she wants to buy?

As with ads for products we probably don't need to spend our money on, there are fewer actual clothing products, which we do need, to choose from.

Men's bodies also change as they age. But we don't seem to have new problems finding things for my husband. Do some men have similar problems finding clothes that are suitable and that fit? If not, why are older females not marketed to?

Rhetorical question. I suspect we are not marketed to because we don't represent a sexually desirable demographic, and most marketing is surely dominated by men.

Ad that to the Constitution
The Right to Thoughtful, Good, Honest Advertising. :) May we know these Truths to be earnest ;)

Yup! I think Judy got it right.

As to fashion, I still wear the same things I always have: jeans and simple tops or sweaters and for dress up, classic dresses -- usually black. I doubt I'll ever change.

RE using senior models: how I wish advertisers would! I have been shopping for clothing to wear to a conference and get so turned off by all the teenagers. You would think the only people who need new clothes are sixteen-year-olds.

RE: advertising pitched at elders. Unable to sleep these past few days, I have been watching television in the wee hours of the morning. You would not believe the number of ads specifically for older folks. Advertisers seem to think we are the primary audience after midnight.


I've noticed that many of these TV ads pitched to older people are narrated in very slow, distinct words of few syllables as if we all are idiots, or at best pre-schoolers.
Although we still need new clothes for special occasions, most clothing in stores seems to be aimed at the very young. Our figures do change, but manufacturers and buyers don't care about "old people."

Has anyone else noticed that there is barely anything to wear--for a woman of any age--for a slightly-nicer-than-business casual occasion? What is there for, say, job interviews, considering we're in the midst of an employment meltdown? Just sayin'.

But now they just...aren't, unless you're planning to clean the garage.

Can you imagine the money a new style of retail would make if someone with the skills to make it happen ever "got" it?

I've always disliked most TV commercials, no matter who they targeted. To me, they were (and still are) so inane that they should be an insult to the intelligence of anyone with an IQ above that of a chimpanzee .

Occasionally, something requiring a modicum of intelligence comes along, but not very often. For instance, the Isuzu commercials (1986-1990), featuring "Joe Isuzu (David Leisure)," who, as a parody of the quintessential car salesman, was a pathological liar who told outrageous and overinflated claims about Isuzu’s cars. Not only were these commercials hilarious because of his antics, but also because of the humor hidden in the clever dialogue.

Are there any clever TV commercials like this today? I suspect not many, but I really don't know because I rarely watch TV in real-time anymore. Now I record all programs that I want to watch, and fast forward through the commercials when I watch them. Not only does this save me from having to watch commercials, but it shortens the length of the program considerably; amazingly, in a 1-hour program there's 15+ minutes of commercials.

Oh - this is a subject I talk about a lot. I get fed up with the young models pictured in catalogues and on websites that are aimed at selling clothes to older women.

Here's a prime example:
This company called FiftyPlus
http://www.fiftyplus.co.uk/shop/ shows very young models (very much younger than 50) in all their photos! What an insult to women fifty and over!