A new survey from Careerbuilder reports that economic meltdown has caused 60 percent of workers 60 and older to postpone retirement (I assume that means those who still have a job.) Eleven percent say they may never be able to retire now due to loss of their savings. Another 73 percent say it will take up to six years of work to recoup their losses. About a quarter say they make up the difference in a couple of years. Read more here.

The New England Centenarian Study at Boston University has been going on since 1992. A recent report about it at Voice of America News noted this important point about living to be 100 and more:

"A lot of people ask, 'Gosh, who would want to live to 100?' because they get this idea of 'the older you get, the sicker you get,' when in fact, what we've found is very opposite to that,” [researcher Thomas Perls] says. "Centenarians, they markedly delay the onset of any kind of disability well to their early- to mid-90s.”

The Washington Post Op-Ed columnist, Eugene Robinson, recounted a personal health care story this week – successful surgery for a hand injury. It led him to this conclusion:

“What is relevant is that I have good insurance, which I obtain through my employer, and haven't paid a dime out of pocket for my treatment. If I were among the 46 million Americans who are uninsured, I'd be looking at a huge hospital bill. No one should face financial ruin because of a mishap with a fork and an avocado.

“The way we ration health care now - according to the individual's ability to pay - is immoral, and if higher taxes are needed to ensure that no one has to choose between health and bankruptcy, I'll pay. That was my position all along, but now it's personal.

“What's changed is that I also feel more strongly about the ability to make my own choices. I decided where I would be treated and, ultimately, what would or wouldn't be done. I'm willing to pay for that, too.”

There is no reason for this item except to note that even the bad guys get old. This is Charlie Manson before and now at age 74. Apparently that swastika on his forehead is a jailhouse tat. 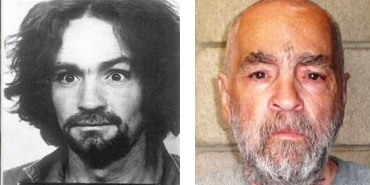 If you receive Social Security benefits AND are also employed, this is valuable information about Stimulus Package payments.

“Employers have received new tax withholding tables from IRS that are based on the assumption that the worker is entitled to the entire $400 individual credit if the worker's salary is under the income limit. A problem is created because the Social Security Administration (SSA) will also independently send out $250 checks to all beneficiaries.

“This means, if working seniors receiving benefits do not take action, they will receive both the credit through their payroll withholding ($400) and the check from SSA ($250). However, double-dipping is not allowed, so the government will insist on recovering the extra $250. Working seniors receiving both benefits will find themselves with a higher tax liability than they are expecting next April 15.”

You need to know this. Read the entire story at the NCPSSM – National Committee to Preserve Social Security and Medicare.

Is a new, bigger baby boom on the way? The highest number of births ever registered in U.S. occurred in 2007, beating the previous record holder, 1957. Read more here. [pdf]

Anytime someone wants to indicate something is out of date or obsolete, they say it's for old people. Now, even that bastion of liberal/progressive/green journalism, Mother Jones, that bastion of liberal/green/progressive magazine out of San Francisco has stepped in it with the headline, Email is for Old People. The magazine is published by the Foundation for National Progress, but they're not making much progress in regard to old age and attitude.

According to a new study from the University of Virginia, human mental abilities peak at 22 and are declining significantly by age 27. I wonder how this news squares with other research showing that the part of the brain that regulates risky behavior does not mature until age 25. More here and here.

This comes to Time Goes By via the two Tamars – one at Only Connect and the other, actually Tamarika, at Mining Nuggets. It's your awwwww video for the day. [2:17 minutes]

Ronni: I'm probably one of those people who is skeptical about living to age 100. My beautiful, dear mother is now 93 & up until about a year ago, she was for the most part independant, very sharp & was a poster person for aging very nicely. We joked about being like her when "we grew up." Then she began to literally wear out, & my sister & I are struggling to keep her indepedant & happy, but I gotta' tell you it isn't pretty! My heart breaks for her as she struggles with the indignities imposed on her as she "ages." I'm not complaining, but posting this observation which I'm sure many others are witnessing every day. Some days my sadness hurts. Dee

Dear Ronni,
Thanks so much for the link ... very much appreciated as always to be part of your wonderful blog!
Smiles and waves,
tamarika

I hope the article on living to be 100 is right. So far, It has been my experience that each succeeding year takes it's toll and it doesn't get better. Based on that I don't expect to be as healthy as the Centenarians in the article, (or as healthy as I am now) next year, much less in 16-1/4 years if I make it to 100.

I think that having good genes is the biggest part of it. Look at George Burns with his cigar and daily drinks at the Friars Club - smoking is an early killer for many, but George escaped. I wish the study had included the age of the Centenarians parents and grandparents when they died.

Ronni, I am another one who believes that inheriting good, sturdy genes is the biggest part of staying healthy and living to be very old. I am only in my 70s and have always taken pretty good care of myself, but every year gets harder. Either you get a totally new (bad) condition, or else one worsens. I need five prescription meds to keep functioning reasonably well. My husband is in worse shape than I am.
As for those boomers who think they'll thrive financially by working on and on and staying as healthy as they are now, they should know that nobody can count on it. One accident, a bout with cancer or serious heart trouble and you may have to retire, ready or not--even if your job still exists.
I wish them well, but they had better try to save money and learn to live within a very small budget.